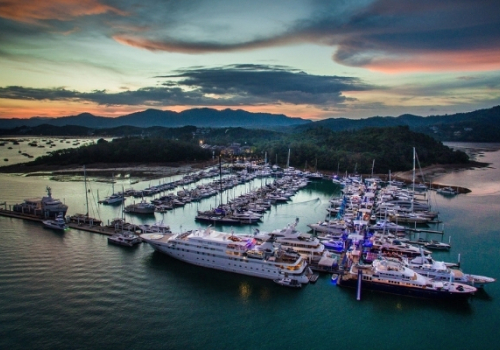 The 6th edition of the Thailand Yacht Show, postponed for the past 18 months along with most other large scale international events, is gearing up for next year’s re-awakening with the backing of all the major international yachting brands and Thai government stakeholders.

The show will eventually become the central event in a new multi-faceted “Festival of Luxury Tourism” proposed to the Thai government by Verventia and designed to help re-position Phuket as a HNW tourism destination – a policy just confirmed as adopted by the Prime Minister himself (read more here).

Originally scheduled back in February this year, show organisers Verventia are cautiously optimistic that the pandemic will be brought under control and the population adequately protected so that TYS can be staged in the first quarter of 2022. Nevertheless, arrangements are being kept flexible in line with the industry’s wishes and the government’s advice, ensuring a timetable with which all strategic partners are comfortable given the on- going situation.

Having had to postpone no less than five shows over the past two years, Verventia CEO Andy Treadwell has refused to make any premature announcements about definitive dates for the reopening, despite pressure from newly-hatched competitors with no experience trying to hijack the show.

"With people and businesses suffering badly and the government resolutely - and completely correctly - putting safety first, we believe it would be highly insensitive, at best, to announce that the virus will have gone away and borders re-opened until it is fact. We believe this is unlikely to be the case in just three months from now. We will stage the show when we and all our clients, partners and stakeholders feel it is safe to do so - which we sincerely hope will be early next year." 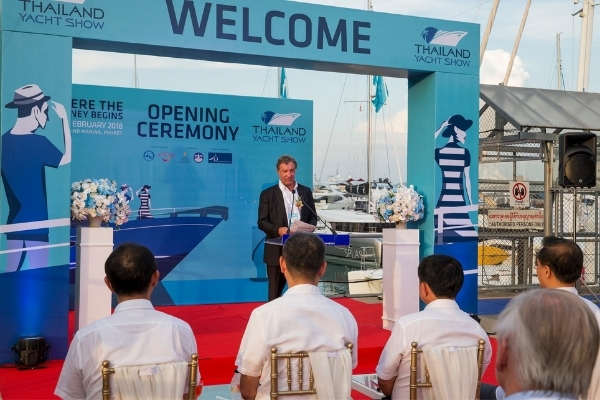 All the major brands and regional dealers have already booked their berths at TYS 2022, whenever it can eventually take place, fully endorsing the show. They also appreciate the investment its owners have made over the past six years in helping to grow the regional industry and promote Phuket as the main yachting hub for Asia:

Simpson Marine, the biggest and longest-standing dealer in Asia and founding partner of all three of the Asia Yacht Shows in Singapore, Thailand and Hong Kong, has once again confirmed the biggest number of berths in TYS 2022, and will be showing at least five or six of the latest models of their brands San Lorenzo, Lagoon, Beneteau, Fairline and Aquila.

Richard Allen, general manager of Simpson Marine, speaks for the most of the industry when he says: “We do not need another show in Thailand- and with the Covid situation in SEA at present, [even] if there was a show taking place in January (2022), we would not attend. The Verventia team has over the last few years been very active in getting the Thai government to understand the potential economic benefits for their country by allowing superyachts to charter here. Now this has finally been approved, I am certain we will see tremendous growth in the boating industry at large. I just wish everybody would get behind [Verventia] and help them grow the Thailand Yacht Show- we don't need opportunists trying to jump the bandwagon, destroying the momentum and causing confusion. We have already seen the same situation in Hong Kong, causing great damage to the industry there."

Ferretti Group, another major global brand enjoying huge success in Asia at the moment and also a founding partner of TYS and all three Asia Yacht Shows, has similarly booked their usual berths on the front row of the exhibition.

Sales & marketing director, Asia Pacific, Fabiomassimo Discoli, commented: “We certainly don't want two competing exhibitions in Phuket. Ferretti Group APAC has a long relationship with Verventia and we trust them in being able to create a quality boat show in the region. We have already invested in their shows and there would be no space for another one in the season 2021/2022."

Princess Yachts is another one of the biggest leisure boating brands in the world and, having similarly supported every single edition of the three Asian Yacht Shows since inception, is equally aghast at the ridiculous situation of a newcomer trying to destroy TYS: “We definitely do not need another boat show. If a new organiser wants to be involved, they need to come together strategically with the existing organisers and agree how they can best represent the industry. We like the idea of a single show covering a larger territory across Asia Pacific, with the tried and tested partners with whom we have worked for the past ten years who can operate a show like the Singapore Yacht Show and deliver a truly positive and genuine experience for our customers," says Princess chief marketing officer, Kiran Haslam.

Some of the most popular leisure boats on the Asian sailing scene are catamarans – safe, stable, speedy and spacious for enjoying life afloat.

The best-known distributor of multihulls in Australia and the Asia Pacific region is Multihull Solutions, and having also been at every Thailand Yacht Show from the beginning, they too have booked their usual wide berths in the TYS 2022 line-up.

Supporting the growth of TYS is imperative for them too: “We are absolutely not interested in yet another newcomer trying to put on yet another competing boat show in Thailand – or anywhere in Asia, for that matter. We have fully supported the Thailand Yacht Show, and all the government lobbying they have been doing - which finally seems to be about to pay dividends for all of us – and will carry on doing so,” states regional director Andrew de Bruin.

Along with the tremendous support the Thailand Yacht Show organizers receive from global industry brands and local exhibitors alike, there are currently many new partnerships being forged with leading resort groups and developers, wealth management companies, investment funds, and overseas governments which will greatly expand the show's reach and help attract many new affluent buyers to meet the exhibitors.

The Thai government initiated the Thailand Yacht Show in 2015 in a move to stimulate Thailand’s economy through developing a high-end marine tourism industry. Verventia were chosen as the event organisers, and now intend to develop it into an international marketing platform that reaches out to the global HNW and UHNWI community.

The extended event will include separate showcases of other high-end luxury products such as private jets, classic cars and electric cars, wellness and healthcare, and Art & Culture - the combined shows providing an irresistible event to attract many thousands of lifestyle-focused consumers from all over the region.

The global campaign currently being prepared for the launch of this event will provide a year-round marketing platform to re-position Thailand as an elite UHNWI destination, as well as being a catalyst for business opportunities in the privileged universes the campaign will engage with.

Visitors will be able to experience the outstanding venues around Phuket, together with unparalleled hospitality, tropical climate, white sandy beaches and some of Asia’s best golf courses.

Vice Governor of Phuket Khun Piyaphong Choonwong, fully endorses the new event: “The Provincial Government of Phuket is delighted to support the initiative of the Thailand Yacht Show team in creating a global campaign to bring a whole raft of wealthy yachting tourists to our beautiful island. The concept of the Festival of Luxury Tourism, incorporating the Thailand Yacht Show, will surely be exceptionally appealing to exactly the kind of high net-worth holidaymakers and the agencies who spread the word to them. At a recent meeting of Phuket’s business leaders, this project received a 100% vote in favour of support. When we can finally open our borders completely once more, there will be a queue of people waiting to come and experience our luxury tourism offering.”