Yachting News » Events » Positivity All Round at TYS Pattaya 2022
« BACK

Positivity All Round at TYS Pattaya 2022 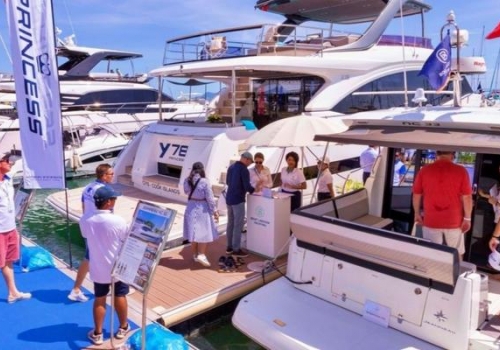 After four days, just shy of 5,000 smiling visitors made some big purchases, and TYS exhibitors and partners alike unanimously agreed that it was good to be back at a yacht show, networking with the industry again and that TYS Pattaya was exactly what the yacht industry needed.

With new models being showcased for many new entrants to the market, our partners and exhibitors now have a raft of new customers and new people are coming to buy boats – it’s an exciting time for the yacht industry in Thailand and many other markets in Asia.

“TYS Pattaya and all our yacht shows are really about building the industry in Asia and growing new consumers from all around this huge, wealthy region where hardly anyone knows about the pleasures of boating,” says Andy Treadwell, CEO of Verventia and Co-founder of the Thailand Yacht Show. “We should be much further forwards in reaching the enormous potential here as a joined up global yachting destination, with thriving local superyacht hubs. The strategic role Verventia plays in helping to make this happen is only possible with support from governments, whose economies stand to benefit the most, as well as from our exhibitors, partners and sponsors.

“We thank them for helping us make this first post-pandemic yacht show in Asia the relative success it has been over the past 4 days, and we look forward to the next one being at least twice as big. TYS Phuket coming up at the end of the year, closely followed by Singapore Yacht Show in April 2023, are pivotal parts of growing the future of yachting and the superyacht industry in Thailand and Asia. Our exhibitors have been pretty well unanimous in saying they can’t wait to get back out there again and fully support all of Verventia’s projects and our unwavering efforts in supporting the industry.’’

Everyone we spoke to during the show agreed that for the first yacht show in Asia after the pandemic – TYS Pattaya was relatively compact compared to pre-pandemic times, but it packed serious punch in terms of yacht and car sales onsite, lots of fun and a huge hit with exhibitors, sponsors and visitors alike, with some great results. No less than 6 yachts were sold with another awaiting confirmation shortly, and 5 BMW cars sold by local dealer German Auto. Just as importantly, most exhibitors reported making a raft of new contacts with positive signs of future sales.