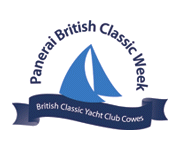 Panerai British Classic Week 2015 got off to a spectacular start off Cowes with an opening Solent course race in glorious sunshine and a warm southwesterly breeze of 15-25 knots.  With such fabulous conditions the 77 strong fleet, racing in six separate classes, was raring to go, but a building ebb tide saw several boats swept over the start line early and forced to return and restart.

First away were the giants of Class 0, who swept majestically down the Solent with truly awe-inspiring power. From the outset John Caulcutt, Jamie Matheson and Stephen Hemsley’s 1911 William Fife II Cutter ‘Mariquita’ and Armin Fisher and Robert Towbin’s 1914 William Fife III Ketch ‘Sumurun’ were well matched and after almost three hours of racing they finished just eighteen seconds apart on corrected time with ‘Mariquita’ claiming victory.  Third place went to Zak Zbynek’s Nathanial G Herreshof designed ‘Eleonora’, who has come all the way from Newport, Rhode Island in the USA to attend the event

Next off were the Modern Classics of Class 1 and 2014 class winner ‘Soufriere’, a Sean McMillan designed 16.7m Spirit Yacht, gave notice that she intends to retain the trophy by winning the opening race by just over a minute from Sean McMillan’s own Spirit 52 ‘Flight of Ufford’.  Third place went to regatta newcomer David Grylls at the helm of his recently refitted Spirit 45 ‘Helen of Durgan”

Class 2 is traditionally one of the closest fought of the regatta and this year looks to be no different.  The opening race went to David Murrin’s 1955 Laurent Giles designed 48’ Sloop ‘Cetewayo’ which reveled in today’s choppy and at times challenging conditions.  Her closest rival was Jamie Matheson’s ‘Opposition’, the 1971 Sparkman and Stephens designed IOR Two Tonner originally built for British Prime Minister Ted Heath.  On the line, Ed Dubois’ 1965 Olin Stephens Admiral’s Cupper ‘Firebrand’ claimed third place, but back ashore a protest was lodged against her by Gildas Rostain’s ‘Stiren’ in relation to a port/starboard incident just after the start.  The International Jury found against ‘Firebrand’ and as a result she was disqualified and Vincent De Vries’ L’Esprit Du Morbihan, a 1969 Dick Carter designed One Tonner, moves up into third place. Class 4 was dominated by David Sherriff’s 1897 William Fife III Gaff Cutter ‘Jap’.  After racing ‘Jap’s’ tactician Martin Payne explained “We’d seen the problems some of the previous starters had had when they started on starboard heading into towards the Island shore, only to find themselves pushed rapidly over the line with no clearing lane to tack into and no room to bear away.  We elected to start on port and it paid off handsomely.  We had to dip a couple of transoms, but we got a choice of lane and clear air.  David and his boys sail the boat extremely well so we were able to consolidate on every leg.”  They went on to win the race by almost 7 minutes from Jonathan Dyke’s Robert Clark Ten Tonner ‘Cereste’ with Ian Welsh’s 1966 Prior 37 ‘Caressa’, designed by Alan Buchanan, third.