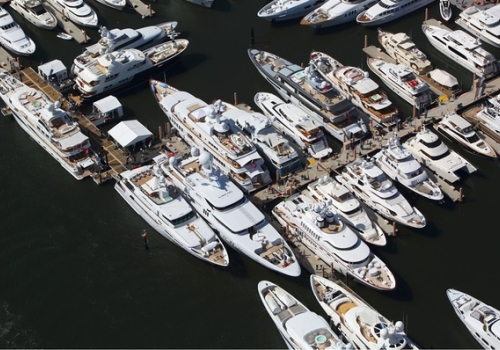 Organisers of the Palm Beach International Boat Show and Superyacht Show Palm Beach, scheduled to run March 26 – 29, have postponed the event indefinitely with no further information available yet.

Another show forced to reverse gears and cancel plans to proceed, having just issued a statement on 10 March that the show would go on, Informa US Boat Shows posted a statement on the event’s website this afternoon stating the show “will be postponed due to global health concerns.”

US President Trump’s announcement today that Europeans would be banned from travelling to the US for the next 30 days no doubt weighed into the decision. Dozens of European yacht builders were scheduled to be exhibitors at the 35th running of the event, and the invitation-only Superyacht portion of the event was set to feature superyachts ranging up to 300 feet, in one of America’s most affluent communities.

It comes after news that organisers of the HISWA Amsterdam Boat Show have announced the early closing of the five-day show yesterday (12 March), following guidance from the Dutch government aimed at preventing further spread of the Coronavirus.

Just two days into a five-day run, the organisers of the HISWA Amsterdam Boat Show took immediate action to shut down the event following instructions announced by the Dutch government – aimed at preventing any further spread of COVID-19 by limiting events with more than 100 people.

This is the second show in Europe this week to close down early due to the increasing spread of the virus. The Stockholm International Boat Show, which opened last Saturday (7 March) and was due to run through Sunday, also closed.

According to a statement from the RAI Amsterdam, the Netherlands National Institute for Public Health and the Environment (RIVM) said the risk of infection had become too large to allow events of more than 100 people to take place.

“We recognise that this measure will have a huge effect on our visitors, exhibitors, the HISWA team and RAI Amsterdam itself,” says Gertjan Roos, exhibition manager of the HISWA Amsterdam Boat Show at RAI Amsterdam. “Nonetheless, we have to play our part in trying to minimise the chance of any further dissemination of the coronavirus.”

“The advice of the RIVM and Municipal Health Services (GGD) has been leading for us since this crisis began and that has also been the case now. We must and will make our contribution to bringing an end to the spread of COVID-19 as soon as possible. The health and well-being of everyone involved is our top priority.”