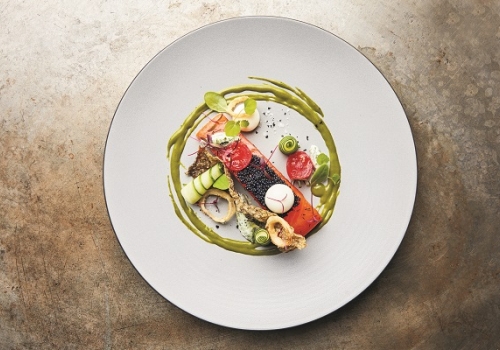 The 7th Mediterranean Yacht Show looks forward to welcoming some of Greece’s most talented Chefs as they showcase their culinary expertise and unmatched creative flair in the renowned Chefs Competition.

Ever since the Mediterranean Yacht Show began, the Chefs Competition has been an intrinsic and fundamental part of the event. After the extended two year wait there is more anticipation than ever surrounding the incredible competition, as chefs face off with one another and create amazing dishes in the hopes of winning the highly acclaimed title.

The contestants of the Chefs Competition 2022 are invited to create vegan dishes inspired by traditional Greek meals, while still meeting the high standards of Greek and international gastronomy expected. This will allow chefs to represent their expert ability to adapt to changing gastronomic trends.

The choice for this year’s competition theme reflects the increasingly popular dietary trend of veganism, in which meals completely eliminate any animal products or by-products. This includes meat, eggs, dairy, etc. The dishes, however, are not only to be vegan but to be grounded in the flavours and traditions of Greece. As such the dish should be a creative version of a vegan Greek dish - e.g. a reimagination of gemista/dishes with legumes or vegetables etc. or a vegan recreation of a well-known Greek dish that usually incorporates meat or dairy e.g. vegan pastitsio or mousaka.

The options are endless with the rich culinary culture that Greece has to offer; the most important requirements are that the chefs stick to the vegan guideline while also creating enticing and indulgent dishes which do not sacrifice contemporary techniques or delicious Greek flavours.

Contestants are encouraged to incorporate local produce and to strive for unique authenticity to impress the judges. They are free to prepare a creative and entirely vegan Greek dish of their choosing with techniques and innovation worthy of being served on luxury yachts in order to gain maximum points from the judging panel.

The Chefs Competition has long been accompanied by the Tablescaping Competition, and together they constitute a long-lived tradition at the MEDYS. Yacht crews are tasked with preparing elegant table settings or modern layouts complete with art de la table and other stylish arrangements.

We are thrilled to announce that this year two of Greece’s most esteemed and distinguished chefs will be returning to once again judge the Chefs Competition.

The first is Chef Angelos Lantos of Spondi restaurant, who has over 20 years of experience as well as 2 Michelin stars, which he was the first in Greece to be awarded. He has also been internationally recognised for his distinct innovation and technical skills and is certain to be a detail oriented and exacting judge. The second judge is Chef Thanos Stasinos, who has worked in executive roles in some of Greece and Europe’s leading restaurants which include Nikkei Athens, Pacific in Monte Carlo, the Ritz Carlton in Valencia, and many more. He will provide an authentic and expert perspective, raising the stakes and criteria for all participants.