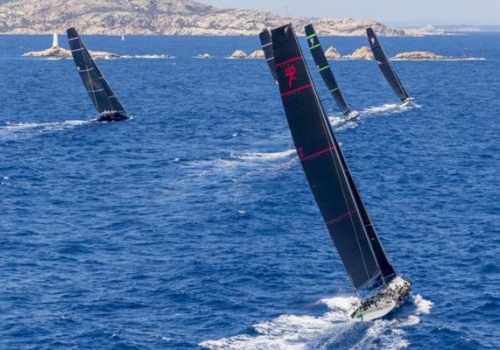 One month ahead of the start of the Maxi Yacht Rolex Cup, entries have now closed and the fleet taking part has reached 50. The regatta, organised by the Yacht Club Costa Smeralda (YCCS) in collaboration with the International Maxi Association (IMA) and with the support of long-standing title sponsor Rolex, is scheduled to run from 4 to 10 September and promises a week of spectacular racing on the waters of the Costa Smeralda and the La Maddalena archipelago.

The 32nd edition of the Maxi Yacht Rolex Cup will go down in history as the first to open the door to foiling boats. The event will in fact host the race debut of Roberto Lacorte's FlyingNikka, the first mini maxi capable of "flying" on foils in a similar way to the AC75 boats currently used in the America's Cup. Another much-awaited debut will be that of the Clubswan 80 My Song, owned by Pier Luigi Loro Piana, which will be officially presented by Nautor's Swan on the morning of 4 September at the YCCS in Porto Cervo.

The Maxi Yacht Rolex Cup will see an exceptional fleet on the water this year, including four J Class yachts racing together, one original and three replicas of the elegant boats of over 40 metres designed to compete in the America's Cup during the 1930s. Svea, the largest yacht in the fleet at 43.6 metres, will sail alongside two regular competitors in the event, Velsheda and Topaz. The J Class Ranger will also return, having last participated in the event in 2014.

The Maxi Yacht Rolex Cup has always stood out among international yachting events for its high standard of competition, gathering the cream of nautical design and boat building in Porto Cervo together with globally renowned professional sailors, champions who have earned Olympic medals and America's Cup victories. Among the most competitive boats in the fleet are undoubtedly the five former Maxi 72s, with Dario Ferrari on Cannonball returning to defend his title from last year.

Bullitt, the Wally 93' owned by Andrea Recordati, will be taking part in her first Maxi Yacht Rolex Cup this year. The entry list also includes the maxi racers Rambler and Deep Blue, while returning to defend titles claimed in 2021 will be Magic Carpet Cubed and the mini maxi Capricorno. The mini maxi cruiser division will see the return, among others, of the Vallicelli 78' H2O and the Swan 651 Lunz am Meer, owned by Riccardo de Michele and Marietta Strasoldo respectively.

The Maxi Yacht Rolex Cup is an unmissable annual event that combines competitive sailing with the glamour of the location and social events ashore. Owners and crew from all over the world meet in Porto Cervo each year as much to renew ties of friendship as for the fierce competition. The event will open officially on 4 September with a Welcome cocktail at the Yacht Club Costa Smeralda, with racing scheduled to begin the following day, 5 September. The Annual General Meeting of the International Maxi Association will be held as usual during the week.