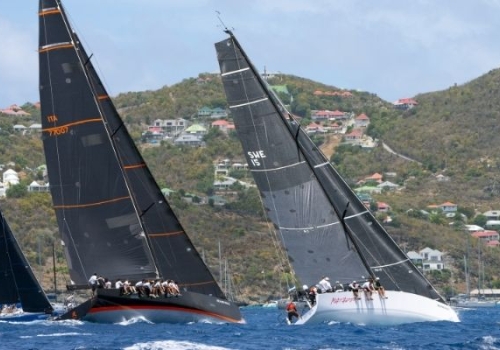 After a two year hiatus due to the pandemic, racing has at last resumed at Les Voiles de St Barth Richard Mille, the third and penultimate event in the International Maxi Association’s Caribbean Maxi Challenge. And what a start it was with the easterly wind firmly in the low 20s and gusting more with large waves rolling in from the Atlantic. Race Director Luc Poupon and the race team sent the Maxi class off from Gustavia on the south side of St Barts on a 28 mile course to the northwest towards St Maarten, taking in many of the islands that make up the Saint Barthelemy Nature Reserve before returning to the finish near the start area.

Of the race itself, Swartz continued: “We had a nice match with Bella Mente on the first beat - classic boat racing, which was really fun. Then we rounded the mark and under spinnaker downwind we were doing fine - they got ahead of us, but we were right with them.”

Unfortunately their subsequent spinnaker drop didn’t do as well and the sail ended up being trawled, breaking several stanchions as the crew scrambled to recover it. It also prevented them hoisting their jibtop at a crucial time and all would have been lost had their rivals not had their own troubles allowing Vesper, lower rated under IRC, to prevail. The peppermint green former Maxi 72 now leads the Maxi class after day one.

Despite a lack of training time going into this event, the well-seasoned crew on Hap Fauth’s Botin 84 Bella Mente were doing well until suffering a halyard issue. As tactician Terry Hutchinson explained: “We were getting ready to peel to a soft sail when the halyard they were getting ready to use came out of the mast. It is not something that any of us have seen before…But we did a lot of good things and it is a long week of racing. That we only lost one point, we’ll take…”

Otherwise, Hutchinson said, they relished the conditions: “Today was awesome, champagne St Barts sailing. The race committee set a really good course – a good mix of boat speed, tactics and boat handling. We had a good race going [with Vesper]: The two boats are pretty even in speed, yet we owe them a lot of time with some of our mods.” Most notably Bella Mente now has two extra foot on her stern. She now lies second overall ahead of George David’s Rambler 88, Wendy Schmidt's Botin 85 Deep Blue and the Mills 68 Prospector. 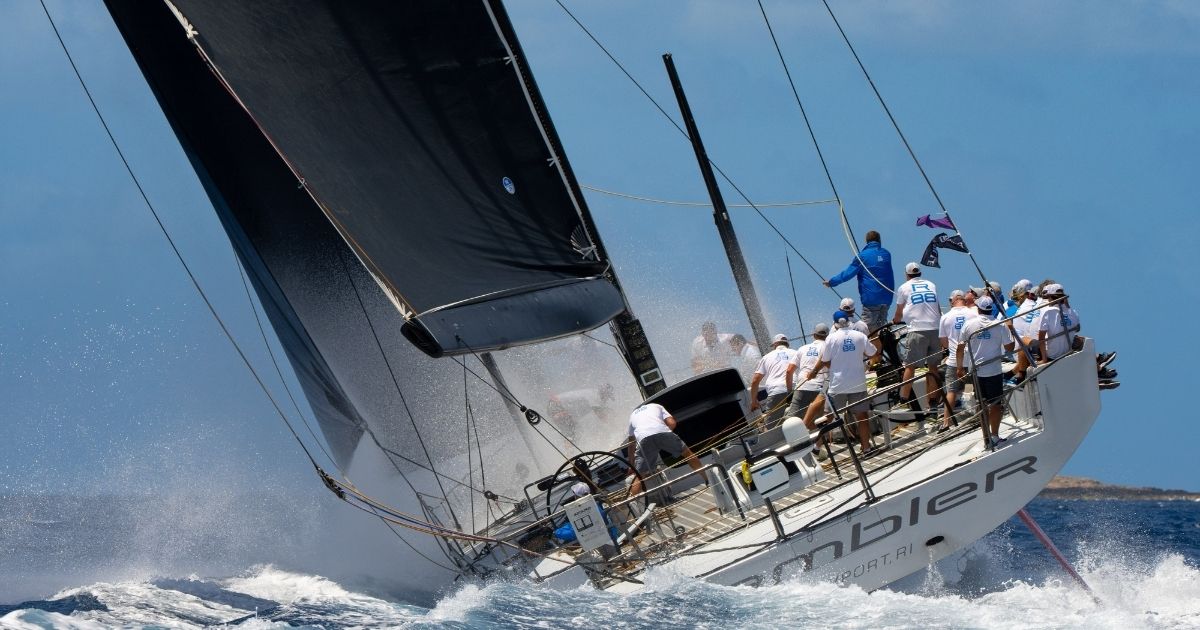 The other maxis, competing in the CSA 3, raced a shorter 24 mile course rounding Ile Fourchue, instead of the Maxi course around Roche Plate slightly further offshore. Coming into the regatta race fit after competing at the St Thomas International Regatta, Jim Madden’s Swan 601 Stark Raving Mad VII prevailed among the lower rated maxis.

“It was typical St Barts conditions,” recounted Anthony Kotoun, Stark Raving Mad VII’s tactician. “This is why we come here - sunny, windy, everything you’d expect and would want it to be with very creative, fun courses, all kinds of angles - the perfect antithesis to what we normally race the rest of the time, which makes it very intriguing. It was gusty – sometimes there were pinch points, next to the lee where it funnels, when it would be like hell on fire for a few minutes…”

Having raced in St Thomas certainly reduced their errors in today’s brisk conditions, despite Jim Madden’s crew including several new recruits for this event.

Karl Volker Frank's CNB 66 Escape had a troublesome day but still emerged third ahead of Italian Luigi Sala's Vismara 62 Yoru. Despite the challenging conditions, Yoru and Stark Raving Mad VII spent most of the day locked in competition, even though the longer Italian maxi holds the edge off the breeze.

“There was some wind, but that is something that we like - it was challenging, but at the same time made for an enjoyable race,” said Sala, for whom this is his first time in the Caribbean with Yoru and the first ever time competing at Les Voiles de St Barth Richard Mille. “The wind was mostly low 20s, so it was no problem and we had no issue in controlling the boat at the various angles. We enjoyed the racing.

“It was a very nice track, with all points of sail - a good opportunity to try everything on the boat. We now know what works and what doesn’t work so we will know what to do better tomorrow,” concluded Sala.

Racing resumes tomorrow earlier at 1000 when conditions are expected to be near identical to today.