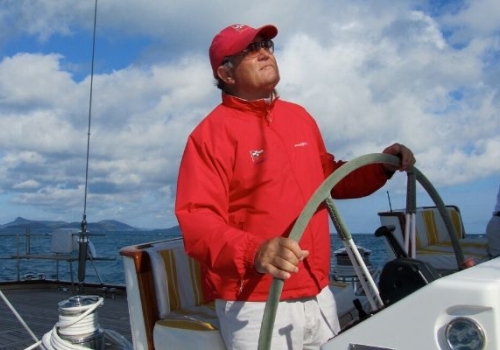 America's Cup teams are returning to the water after over two months away after the coronavirus pandemic forced shutdown of a global road show.

A co-founder of Asia Pacific Superyachts, making his home and heading up the network’s eastern side in Koh Samui in the Gulf of Thailand, Charles Dwyer has a long history with sailing and is a former America’s Cup team member.

Sailing as a child at the local Yacht Club in Newport, Rhode Island USA, Charlie worked with the Kennedy family and raced in the Newport to Bermuda Race, the Long Island Fall Series and most other regattas. He has been a crew member in the Admiral's Cup, the America's Cup for the Courageous Team, the America's Cup for the Eagle Team and in the International Match Racing circuit. He has served as Captain of the Maxi Yachts Longobarda, Vanitas, Othello and Kialoa III, Yannaka Too and is now skippering a superyacht in global waters.

The foreign teams will be allowed to build bases in Auckland and carry out boat testing ahead of the 36th America’s Cup regatta, set for March 6-21 next year, with Team New Zealand preparing to defend the America’s Cup against challengers from the United States, Britain and Italy.

Other news having an impact on American’s Cup planning is an announcement that border exemptions will soon be available for vessels, including work vessels, yachts and superyachts. The New Zealand Government announced key changes to New Zealand’s border restrictions that include a new maritime exception for vessels, one including yachts and superyachts with a ‘compelling need’ for the vessel to travel to New Zealand. ‘Compelling need’ includes delivery of a vessel to a business; refit and repair; crew handover; response to an emergency or humanitarian situations; supply or support of ongoing operations; or discharge of catch.

“Refit and servicing vessels contributes 25 percent to the $2 billion New Zealand marine industry and we now look forward to seeing many of our companies regaining some of the lost business from over the past four months,” says NZ Marine’s executive director Peter Busfield.

“This new border exemption comes just in time for the crucial period of July to November, when the majority of visiting vessels requiring refit or repair schedule their arrival in New Zealand.”

Border restrictions are also impacting another part of the event, said Dwyer, referring to an article in NewsHub in NZ on June 28, 2020: “New Zealand border restrictions threaten Youth America's Cup”.  The article reports: “The Royal New Zealand Yacht Squadron warns that tens of millions of dollars could be lost if immigration rules aren't sorted soon. Seventeen teams from around the world have already signed up for the Youth America's Cup, which, for the first time, will feature mixed crews.  But if they don't have certainty soon, the whole event could be in jeopardy.”

“Crews of four - two men and two women aged between 18 and 25 will compete to become the best young sailors in the world. The event will run alongside the America's Cup in February and March next year. There's just one problem. Because of New Zealand's strict border rules, none of the teams can get into the country.”

New Zealand government and organisations are working hard to bring about solutions, and thousands of supporters like Captain Charlie Dwyer applaud their efforts.