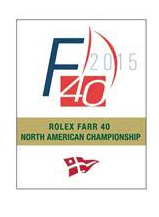 In 1542 the first documented sailor – Portuguese explorer João Cabrilho – anchored briefly in the area of Santa Barbara, California. While Cabrilho was sailing to claim new lands for the King of Spain, another sailing claim will be at stake at this time next week: the 2015 Rolex Farr 40 North American Championship title. From August 19-22, 15 teams will race in Santa Barbara for the title, and a specially-engraved Rolex timepiece.

2015 marks the second year in a row that the action for the Farr 40 class has been centralized in California, with this 2015 Rolex Farr 40 North American Championship being hosted by Santa Barbara Yacht Club (SBYC).  Situated on the longest stretch of south facing coastline on the west coast, Santa Barbara has a Mediterranean-type climate and is a topographically diverse stretch of coastline.

With the steeply-rising Santa Ynez Mountains behind Santa Barbara, and the Channel Islands to the south, the sailing conditions in August tend to be typical of Southern California with “A late sea breeze, 10-15 knots, that will last most of the afternoon and trend right as the velocity builds,” said Santa Barbara resident John Demourkas, whose Groovederci is one of the Farr 40s based at SBYC. “Santa Barbara is unique in that it is affected by the Santa Ynez range of mountains that are orientated west to east at about 1,000 meters. This majestic backdrop is why this part of the coast is called ‘The American Riviera.’ But the mountains can also affect the breeze by creating eddies and light and tricky conditions. We will also have the possibility of Santa Ana winds – which are hot dry winds from the northeast deserts that can develop into high velocity and gusty conditions that are quite challenging. I hope we will get our typical westerly winds, but the climate has certainly been anything but consistent.  As with most of Southern California, we also have giant kelp; during this time of year the warm waters tend to kill off large rafts of it that must be avoided at all costs. This makes for an added variable on the race course.”

Demourkas has been active in the class since 2000 when his wife Deneen bought and campaigned the original Groovederci, Farr 40 #57, the two becoming the class’ first married couple to race together.  As Deneen moved into other classes, John took over #57, subsequently purchasing the current Groovederci after the 2007 Worlds in Copenhagen. “Sailing in the Farr 40 class has been phenomenal!” added Demourkas.  “The level of competition is so very intense, what with the most talented and famous group of sailors competing with you and against you it is a personal challenge for me to perform my best.  The sailing is so very close and there is little room for any error; no throw outs therefore you live – and die – by the sword. As to why I/we have done this for so long….it comes down to the people: the organizers, officials, sailors and the other owners in the class. For the last 15 years we have had a wonderful camaraderie amongst the owners and have held a close friendship with many of them. Every regatta is like a family reunion and there is a certain amount of energy created when we are all together. It’s the level of playing, the respect I have for all the competitors and the lasting relationships that have kept me in the game. I have been fortunate to sail with many folks and I must say that they are a big part of the joy I get from sailing a Farr 40.”

The family ethos of the Farr 40 class, the cohesion of each team and the high level of performance, together with the genuine sporting nature of the competition, align perfectly with the core values of Rolex, title sponsor of North American and World championships since 2001.

Additional information on the 2015 Rolex Farr 40 North American Championship, including daily race reports, full results and photos will be found online at www.farr40.org. Follow the event via Twitter or on Facebook.