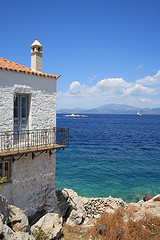 This stunning chain of islands is not as renowned as some of the more popular islands, such as Mykonos, but they are breathtakingly beautiful, and well worth adding to a cruising itinerary.

These islands are particularly attractive to Athenians, who benefit from their close proximity- making them regular weekend visitors!

Each island has its own piece of history, and the largest of these are Aegina (famous for its 500 BC temple of Aphaia), Spetses and the lively islands of Poros and Hydra.

This island hosts one of the most famous remains of ancient Greece, the Temple of Aphaia, which was built around 500 BC.

The surrounding sea is crystal clear and perfect for snorkeling and swimming.  Like many of these islands, the old fishing towns are well worth a visit, although weekends can be extremely crowded in the summer months.  As such, a trip to the village of Perdika is highly recommended during the week. This is a great stop off point for refueling and stocking up on all the fine Greek foods and wines.  There is a fresh fish market in town and many charming cafes and eating places, where you can taste the famous Loukomades served with hot honey. From the Port of Poros, you can cruise to some of the beautiful smaller islands close by and drop anchor to enjoy the ultimate calm. SPETSES is one of the smaller Islands and has managed over the years to retain its very traditional character. It was the birthplace of the heroine Bouboulina, who fought in the War of Independence from the Ottoman Turks.

The town of Dapia, a popular anchorage spot, has a square full of pleasant outdoor cafes and nearby is a Greek copy of a British public school, where author John Fowles once taught (he later set The Magus here). Take a side trip from Dapia to the Bekiri cave on the west coast and to the south, sail past shipowner Stavros Niarchos' private islet Spetsopoula. HYDRA is one of the most charmingly beautiful of this chain of islands and cannot be bypassed. The views from the quay are magnificent and the small harbor town is truly vibrant.  The winding streets are quiet and charming and have attracted many jet-setters over the years.

The island was mentioned in the writings of Herodotus as early as the 5th century B.C., but its history as a boat-building center from the 17th century onwards has made it an island of note. KYPARISSI: A beautiful town divided into the new and the old, surrounded by green valleys and fertile land. Make sure to visit the castles.

MONEMVASIA: A Byzantine area of Greece connected to the Peloponnese by a strip of land, with remains of a fortress wall and numerous Byzantine churches, it is a must for visitors who love history.