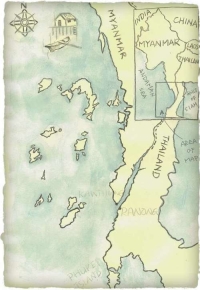 Virtually unknown to the outside world, the Mergui Archipelago is located in Myanmar's (Burma's) remote south: a group of 800 deserted islands that lie at the heart of our sailing area.

Now, picture eagles circling above, gibbons and monitor lizards eyeing you from the thickets, while a sundowner is being mixed for you on board the yacht.

And best of all: you have this entire experience to yourself. You can sail for days on end and meet not a soul but the odd fisherman in a dugout canoe.

Just across from the Thai border, the archipelago opened to foreigners as recently as the late 1990s. With only a few of the 800 islands sparsely populated and a couple dozen visitors to the entire area each month, the Mergui Archipelago remains one of the planet’s most unspoilt destinations.

Under full sails, heeling over, the wind and sun in your face, salt on your lips, and no land in sight.

Or, a leisurely cruise to the next beach, feet up on the helm, drink to hand, and watching the dolphins jump.

Whether you’re an experienced sailor or on board a ship for the first time, you will love Myanmar’s Mergui Archipelago, an area so versatile and large that you can beach hop for weeks on end or go on multi-day blue-water passages. Or both, of course.

The Mergui Archipelago lies in tropical waters and temperatures are constantly warm and pleasant, with average highs ranging between 28-33°C (84-92°F) and average lows between 20-24°C (69-76°F).

Sailing is possible throughout the year but there are major differences between the seasons.

The best time for sailing in the Mergui is between November and April. Conditions during December to February are perfect, with warm, sunny weather, a steady 20 knots of wind, and calm seas. March and April have less wind, which is why they are the best time for diving and snorkelling with clear water.

From May to July there are strong onshore winds and a larger swell. There are occasional hurricanes in the Mergui from May to June. The rainy season is from July to October.

Even when winds are strong and swells are sizeable, the numerous large islands provide hundreds of protected anchorages for any season, as well as “hurricane holes” for stormy days.

While some areas of the archipelago have not been entirely charted and explored, the region provides safe sailing, with few under-water obstacles or dangerous reefs.

The entire island group is replete with good and safe anchorages in sandy or muddy grounds.

And in case we encounter days without wind, there is enough to explore in the water and on land to keep us busy. Plus, the yacht’s engine runs up to 8 knots… Explore tropical forests, hiking through valleys and up hills, walk along kilometres of beach with the only foot prints those behind you, kayak through enchanted mangroves, swim, snorkel, scuba dive, and go fishing: you’ve got it all. The Mergui Archipelago is teeming with wildlife.

Due to government neglect and the region’s long isolation, its 800 plus islands have remained virtually untouched. They are composed of limestone and granite and vary in size from tiny to islands larger than Singapore. Most of them (we have yet to find one that isn’t) are covered in thick jungle growth, which drops into azure waters, interrupted only by beaches, rocky headlands, tidal rivers, and mangrove forests. Lampi, one the largest islands, is part national park and home to some of the planet’s oldest mangrove forests.

Animals on the islands include gibbons, pythons, civet cats, huge monitor lizards and the rabbit-sized mouse deer. Hornbills are a common sight, while kites and white-bellied sea eagles circle above every island and kingfishers dart around eerily quiet mangrove forests. Frigate birds, pacific reef egrets, green imperial pigeons, and emerald doves are just some of the birds native to this diverse archipelago.

Further out west, where the continental shelf drops off into the deep sea, a range of underwater mountains called the Burma Banks are a thrilling diving area for the experienced. We provide you with snorkelling equipment at no extra cost.

Boost our food supplies with the best produce possible: fresh fish directly from the sea! Cast for tuna, barracuda, mahi mahi, giant trevally, Spanish mackerel or snapper while sailing or when close to shore. Or go for the truly big guys and try your luck catching marlin and sailfish. Either bring your own rods or just use ours. Most of the local fishing boats in the area catch squid and cuttlefish and, if you want, we can always buy directly from them.

The UNESCO examined the Mergui Archipelago as a potential World Heritage Site for its biodiversity, and the organisation's report concludes:

“While the biodiversity is largely unknown, the intact vegetation on such an array of islands, with associated marine habitats and spectacular geomorphology, is likely to be of high global biodiversity significance. The biodiversity values of this set of forested continental islands, and the limited protection afforded such coastal islands elsewhere in the region, indicates that they are likely to be of global priority and form a potentially important trans-boundary World Heritage inscription." Read the full feature on the Mergui Archipelago here

For more information on chartering a yacht in Myanmar (Burma) visit www.burmaboating.com