Yacht Charters & Cruising » The Growing Marina Industry in China
« BACK

The Growing Marina Industry in China 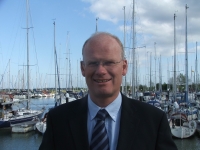 I had the very good fortune to be invited to attend the World Marina Conference in Singapore in May 2011. This was an exceptionally well-run conference followed by some very impressive marina visits in Singapore. The conference gave me the opportunity to really get to know a dear colleague Y.P. Loke, The Yacht Harbour Association (TYHA) representative for Asia, and chairman of the Singapore Yachting Industry.

Y.P., as he is known, introduced me to Albert Khong, the general manager for Nansha Marina, situated on the Pearl River Delta in China. I also met a number of marina operators and developers, and found myself being invited to join the 2011 China [Haikou] Yachting Industry Forum and International Yachting Exhibition and Conference, once again representing TYHA and speaking on the future of the global yacht industry development, and the benefits of membership including the TYHA Gold Anchor Award Scheme.

This conference was based in Haikou, on the Island of Hainan, in southern China. The conference was based at the new Howard Johnson Conference Centre. This was a very substantial conference, with many international speakers, and a wide variety of topics, once again centred on the developing marina industry. It soon became very clear to me how keen the Chinese authorities and regional government bodies are to develop this industry, and to encourage new boating customers into boating.

I attended the opening of the Haikou International Yachting Exhibition at the new marina at Haikou. This was a very attractive new marina, which had undertaken huge efforts to demonstrate its appeal to all boat sizes, and welcomed many young people to show off their windsurfing skills at the opening of the show.

In October this year, I was able to see Albert Khong once again, by attending the first Yacht CN 2012 China Marina Conference and the Nansha Bay International Boat Show, as a guest of Nansha Marina. On this occasion, I was looking forward to meeting more of those involved with the Chinese Marina Industry. The conference was attended by some 120 delegates, and offered an impressive list of international speakers, hosted by Nansha’s owner Commodore Eric Fok, and General Manager Albert Khong.

I was so impressed by the incredible attention to detail and the wonderful hospitality of our very kind hosts. I really enjoyed meeting the hard working and dedicated team, and spent some very enjoyable time getting to know both Eric Fok and Albert Khong, and their plans for completing the Nansha Bay Marina Village. This marina, having recently joined TYHA, undertook their first assessment in 2011. It became the first marina in China to be presented with their Yacht Harbour Association Five Gold Anchor Award.

I hope that you are able to visit by boat this most impressive marina, and its wonderful shoreside facilities. Nansha offers two first-class restaurants, a beautiful bar overlooking the marina, together with all the leisure facilities that any boat owner could wish for. I have to say that, in conjunction with the Gold Anchor Award, the boatyard facilities are some of the best that I have seen worldwide. I would like to congratulate both Commodore Eric Fok and Albert Khong for setting the benchmark for a marina that is truly Five Gold Anchor in all its standards – Well done!

I am delighted to report that marinas are being developed in many areas along the Chinese coastline, and we will see marinas developing in many of China’s lakes and inland waters. As boating in China is growing so enthusiastically, we need to welcome the people of China into all levels of boating!

Following my visit to Nansha, I took the ferry to Hong Kong to visit the Gold Coast and Country Club Marina, and met their Marina Manager, David Bowdler, who very kindly showed me around this established superyacht marina. David is a very experienced manager, and it was good to take on board his views, and also an opportunity for him to learn more about the benefits of membership of the Yacht Harbour Association. TYHA has two other members in Hong Kong, Discovery Bay Marina Club Ltd., and Clearwater Bay Marina. We look forward to welcoming more marinas from China and Hong Kong to becoming our members.

Julian Goldie is the Hon. Chairman of The Yacht Harbour Association Ltd. (TYHA). He joined the family business, Tollesbury Marina Ltd., in 1983 and worked in every department within the full-service marina, supporting its growth and expansion through the 1980s and 1990s. In 1988, Mr. Goldie took on the role of managing partner and purchased the other partners’ interest in 2007. In addition to marina berthing, the business now offers boat repair, boat handling, yacht chandlery, yacht brokerage and new boat sales, together with a yacht club, The Tollesbury Cruising Club.

In 1999, Tollesbury Marina joined Transeurope Marinas, a mutual association offering benefits for visiting yachtsmen and woman. After several years, Mr. Goldie became chairman and he was asked to join the TYHA Council. After serving on the council for five years, and on a number of sub-committees, he was asked to stand for chairman. He was elected to serve for one year and was recently re-elected to serve a third year. TYHA’s work has grown, and Mr. Goldie has led the successful international ‘Gold Anchor’ and ‘Which Marina?’ campaigns in 26 countries. The association’s great strength is the team with Mr. Goldie as Chairman, Gareth Turnbull as TYHA General Manager, and Libby Gordon as TYHA Administrator. Mr. Goldie is very pleased to support their work.