Yacht Charters & Cruising » Shelter from the Perfect Storm
« BACK

Shelter from the Perfect Storm 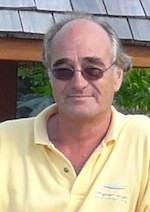 It is early evening on Tuesday 10 October 1780. The two-masted trading schooner “Ocean Star” is anchored under Pigeon Island, Saint Lucia, enjoying a balmy tropical autumn evening. The skies are clear. The winds are calm. And schools of jacks and snappers are throwing up phosphorescence around the ship.

As the evening progresses a slight swell starts to wrap around the island and break on the rocky causeway separating Pigeon Island from the main island of Saint Lucia. The wind starts to fill in from the northwest, an unusual direction for the tradewind belt in the Caribbean.

By midnight it is blowing 40 knots out of the WNW, 5 metre breaking seas are crashing onto the rocks behind the “Ocean Star” as her anchor cable parts and minutes later she is dashed to pieces on the rocks while the crew desperately try to set sail. All 12 perished, joining the total of 22,000 souls lost in what became known as the “Great Hurricane” of 1780.

It is early evening on Friday 29 October 2010. The two-masted training schooner “Ocean Star” is anchored under Pigeon Island, Saint Lucia, enjoying a balmy tropical autumn evening. The skies are clear. The winds are calm. And schools of jacks and snappers are throwing up phosphorescence around the ship.

As the evening progresses, it becomes clear that a late-forming, late-season tropical disturbance is taking shape east of Trinidad. Satellite images are showing a forming tropical depression; Weather Routing International have issued alerts for the entire Windward Islands and the National Hurricane Centre have advised the governments of all islands between Grenada and Martinique to issue Tropical Storm Warnings and Hurricane Watches.

Two hours later, the “Ocean Star” is safely berthed in the perfect shelter of Marigot Bay, secured to massive concrete blocks imbedded in the seafloor. The following day is spent preparing the ship for what is clearly developing into a Hurricane which passes just South of Marigot Bay overnight on the Saturday with winds gusting to 100 knots on the hills around the bay.

Despite nearly a metre of rain in the period of 24 hours while the storm stalled and strengthened over Saint Lucia no damage was suffered by the “Ocean Star”, her crew or any other yacht berthed in Marigot Bay. Some of the open boats, swamped by the sheer weight of water, were a different story!

The honest answer is: fiction in the first part…inspired by fact in the second. Our perception of the Caribbean in the summer and autumn is based more on the first story than the second. (Check out a great video documenting Tomas' pass over Marigot Bay here.) In most summers and autumns there are many more days of gale force winds in the waters around the French Riviera than there are in the Caribbean. Equally, to the frustration of sailing yachts, there are more completely windless days in the Mediterranean than in the Caribbean except in the coastal areas generating sea breezes.

The purpose of this article is to open readers’ eyes to the reality that the Caribbean can be a 365-day-per-year destination and to take you through the immense preparations that those of us in the marina industry in the Caribbean take to ensure yacht safety for those rare events called “hurricanes”.

The Marina at Marigot Bay is located in Marigot Bay, Saint Lucia. Whilst south of the most usual hurricane tracks we have experienced two intense hurricanes since proper records began in 1851 and a fair number of tropical storms, along with Category 1 and Category 2 hurricanes.

The Marina was constructed in 2004 with the specific objective of taking full advantage of the natural shelter of Marigot Bay to enable (relatively) safe berthing for the majority of yachts in hurricane conditions. The inner part of Marigot Bay is a silt-filled volcanic bowl with the outer bay providing a network of entrance reefs and sandbars that basically prevent any swell or surge from entering the inner bay.

The whole bay is surrounded by 450-foot hills that shelter winds from the east and deflect winds from the west so that sea level storm winds in the inner bay are typically only about one-third of open sea conditions at maximum gust.

The dock is a fixed concrete and steel structure using reinforced concrete-filled 18-inch drill casings tied into a concrete beam dock framework with “float-out” timber decking panels in the event of storm surge exceeding 4 feet (Category 4 and 5 conditions). This avoids dock damage caused by wave impact from below. The mooring bollards are integrated into the dock structure, not bolted on and the mooring weights consist of 8-ton immersed weight sets that are submerged in the silt bottom of the bay.

The large yacht moorings are attached to pairs of these weights chained together to dig further into the mud when under load. Ocean Star was actually attached to a single 8-ton weight during Hurricane Tomas and managed to drag it 30 feet downwind, creating a 6-foot-deep by 8-foot-wide trench in the seabed in the process. Nothing broke!

Prior to the start of the official Hurricane Season, on 1 June, the entire mooring structure is surveyed and corroded or worn components are replaced. In the event of a storm, the Marigot Bay “Hurricane Plan” is implemented to reduce the likelihood of damage or injury and to enable smaller local boats to use the mangrove system around the bay in order to shelter from the system.

The Hurricane Plan is carefully managed to reduce the environmental impact of this practice on the mangrove system which plays a vital role in the year round protection of the bay and acts as both a filter of land-sourced pollution and a major spawning ground for local fish stocks. More on the Marigot Bay environment in my next article, however.

The Marina at Marigot Bay is positioned in what US Author James Mitchener described as “The Most Beautiful Bay in the Caribbean”. Capable of berthing yachts up to 85 metres LOA and with berths also to 6.5 metres draft the combination of natural beauty, the facilities of a 5 Star Hotel and a Marina Team trained to practice the highest possible levels of customer service make Marigot Bay a natural owner or charter pickup point for charters on Saint Lucia and south to the Pitons & the Grenadines.

Bob Hathaway, [previously] the Marina Manager at Marigot Bay, comes from a seagoing family and from a career that has encompassed yacht & commercial craft design & build, refit, boatyard management and HR management. He is the Vice President of the Caribbean Marine Association, a Director of the Soufriere Marine Management Association and of the Saint Lucia Hotel & Tourism Association.

*Photos provided by the Marina at Marigot Bay.