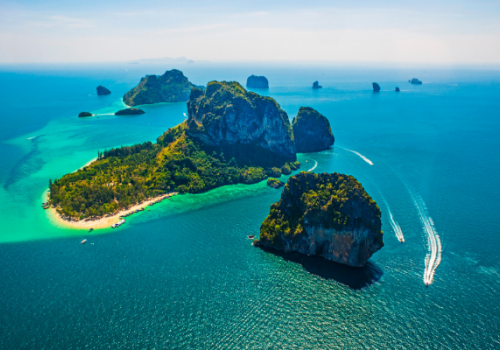 South East Asia is without doubt one of the globe’s most captivating and diverse regions, offering a unique experience in terms of culture, history and cuisine, as well as breath-taking scenery both on land and at sea.

The ASEAN nations have long proved a magnetic draw to tourists from China, Europe and beyond, so it’s something of a mystery when you consider that their phenomenal cruising grounds, untouched beaches and remote picture-perfect islands have remained largely undiscovered where the superyacht industry is concerned.

Widespread regional government indifference to the marine leisure industry and yacht tourism, and the subsequent lack of “Mediterranean-standard” marinas and other infrastructures in South East Asia is a situation many are keen to see change - and none more so than Andy Treadwell, whose company Verventia runs the Singapore, Thailand and Hong Kong Yacht Shows.

His efforts to encourage governments and yachting’s major players to invest so that the area can open its doors to international yachting have gathered pace over the last decade since he launched the region’s main industry sales and marketing platform, the Singapore Yacht Show. And despite the COVID-19 crisis, which has seen the 2020 edition of SYS delayed from March to October, he is confident that change, while not immediate, will eventually come.

‘Despite our best efforts, there is still relatively little business in this region yet,’ says Andy from his office in Singapore. ‘Yet although the number of marinas in Asia has barely grown, boat buying and the number of people who are attracted by the idea here has increased significantly. In a global context, the Asian market is estimated to account for only 10-15% of new business and, given that roughly a third of the world’s private wealth resides here in Asia, there is unarguably a huge potential. 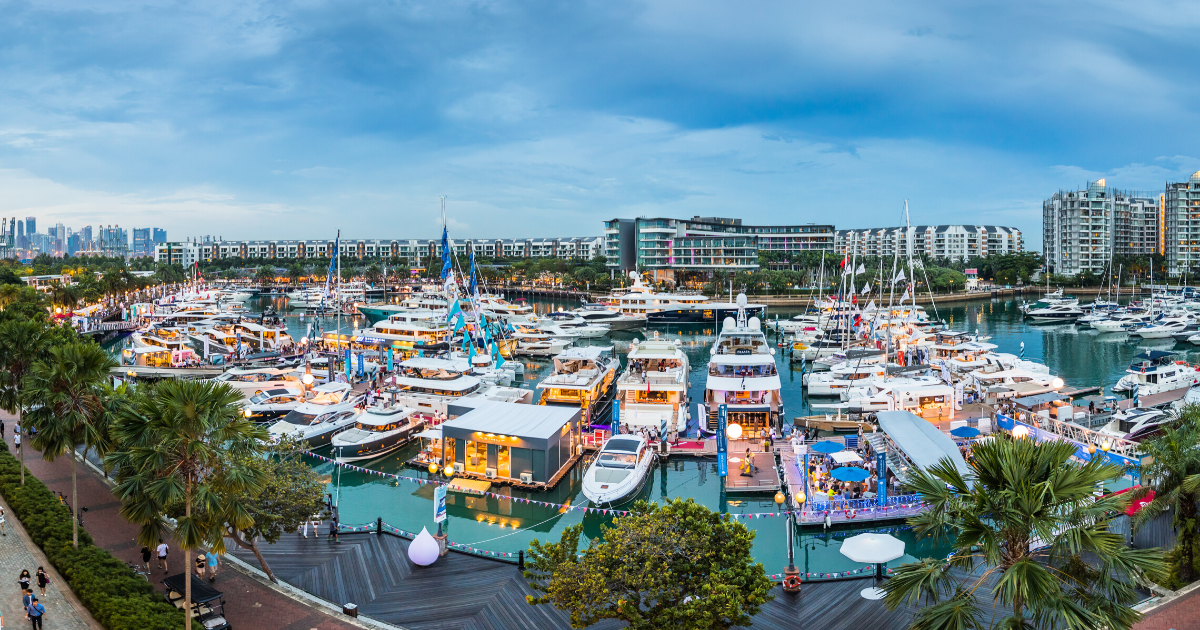 ‘In that sense, we are still at the very beginning of the development of the market. It may have more than doubled in the last decade, but it could grow an awful lot faster if two things happened: first, all the key governments would have to fully buy into the idea and be prepared to change prohibitive tax and visa regulations; and second, the industry should also buy into the idea by uniting and collaborating, with key stakeholders prepared to invest.

‘Neither of those are easy to achieve but I remain optimistic that we will keep making progress, and I can foresee some good things happening in the next year or two, post-COVID-19.’

One of the region’s most established players, Simpson Marine, concurs with Andy’s optimism for continued growth in the sector, having sold over 100 yachts, both new and brokerage, last year.

It’s encouraging to note that some of yachting’s leading names worldwide are fully supportive in seeing a SEA expansion and are already nurturing new business in Asia. 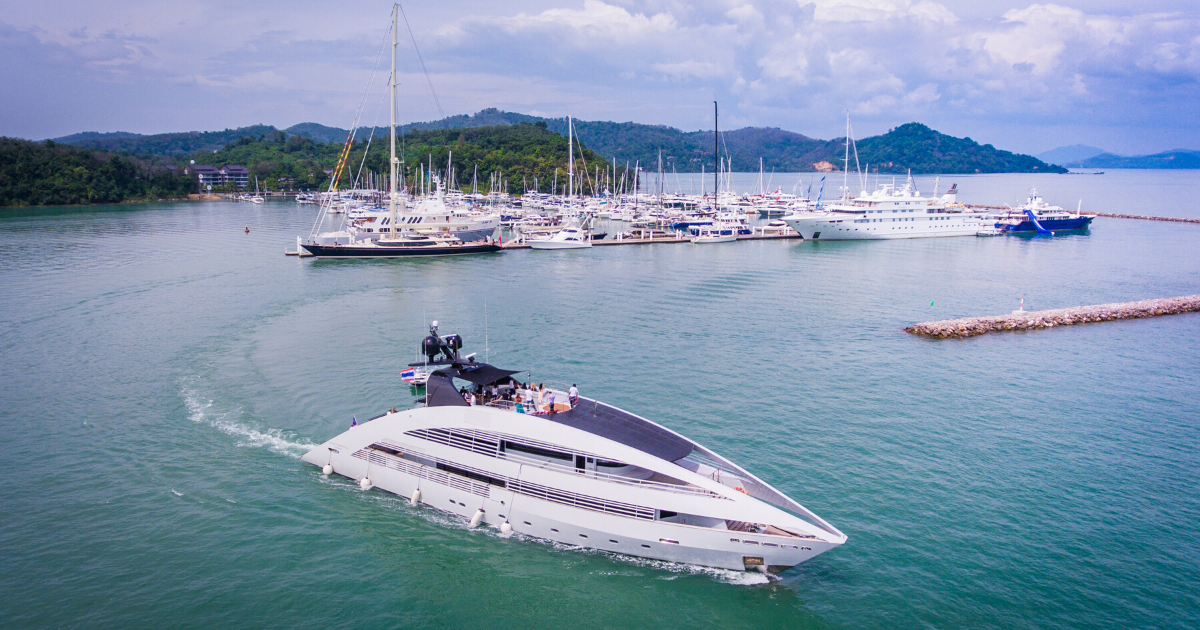 ‘We’ve been working with Asian clients and expats living in the region for over 15 years, so it is by no means a new market for us,’ says Y.CO co-founder and chairman Gary Wright.

‘We are seeing an increase in clients from the region across different areas of our business, including charter, purchase, yacht management and new build project coordination.

‘Asian clients have specific expectations of their yachting experience and our team is skilled in meeting these and ensuring that both they and the onboard teams we work with are respectful and considerate of all aspects of Asia’s diverse cultures.’

Cultural considerations have proved to be a major stumbling block as historically, local populations have viewed the ocean as a trade route rather than a recreational zone to enjoy with family and friends.

‘It’s true that there has never been much of a cultural affinity with the sea as a leisure playground in these parts in the past – the sun is too hot, the climate too humid and the seas in previous generations were seen more as convenient for transport, fishing and dumping waste,’ adds Andy. ‘However, that’s changing rapidly, and we are really trying to drive that change.

‘The on-water lifestyle is one that Westerners have long enjoyed and there is definitely a growing appetite amongst affluent Asian lifestyle seekers to experience the thrills and adventures that come with owning a yacht or luxury boat. As wealth is handed down to younger, more adventurous and leisure-focused generations, we are starting to see more Asians buying big boats.’ 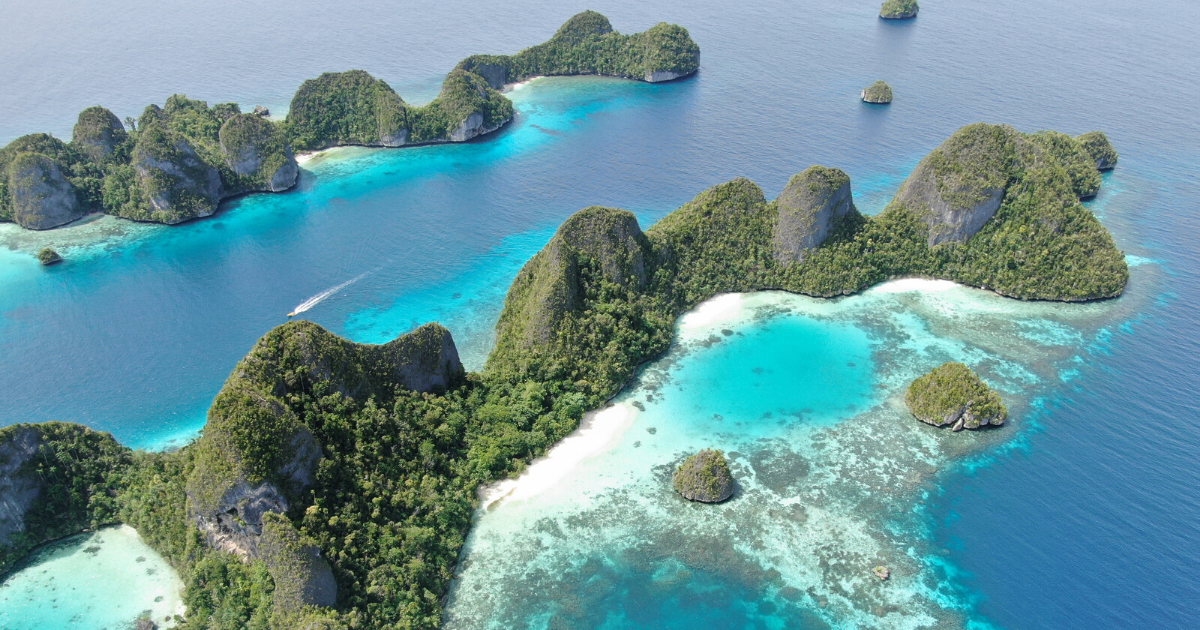 Ewa Stachurska agrees that attitudes towards yacht ownership are changing for the better. ‘In the past it was mostly for status and entertaining but that has shifted to genuine pleasure usage, enjoying with family and friends, fun with water toys and in an increasing number of cases, regional cruising,’ she says.

With Thailand welcoming almost 40 million international tourists last year, making it the most visited among all ASEAN countries, the big question is what needs to be done to further drive forward a marine leisure industry which could generate many hundreds of millions of dollars in income as well as local employment opportunities and technical progress.

At least part of the answer lies in enticing and attracting brokers to push owners and captains into considering SEA (South East Asia) as a luxury superyacht destination, according to Andy.

‘The more boats that come here, the more the latent market of thousands of potential charterers and eventual buyers would wake up and want to play too. However, existing owners – 90% of whom are based in the Med in the summer - are not going to be particularly motivated to invest in coming to Asia as a destination if every country pretty much hangs out a huge warning sign saying “Foreign Superyachts Keep Out!! Keep your millions of tourism dollars and go spend them elsewhere!!”’

Despite the inherent problems and hurdles that inevitably lie ahead, there is much enthusiasm being generated by globally recognised brand leaders which already have a permanent presence in SEA.

An industry leader in pioneering unusual destinations all around the world, Fraser is keen to do the same for SEA. 'Fraser has always championed new yachting destinations and we’re keen to see Asia develop and grow in popularity." adds Lisa Peck, Global Marketing Manager at Fraser. “We all hope therefore that the governments will make the necessary changes to regulations so that this can happen. There is already increasing quality infrastructure to support the needs of superyachts, which is a good sign. We are excited to see Asia flourish, creating a greater choice for charter clients to experience the exceptional cruising grounds on offer throughout the region.'

Lies Sol, Charter Manager at Northrop and Johnson in Phuket, is convinced that charter market growth will continue in the region. She cites US, Canadian, European and Chinese clients among the keenest charterers in the region with 30% of these being Chinese. 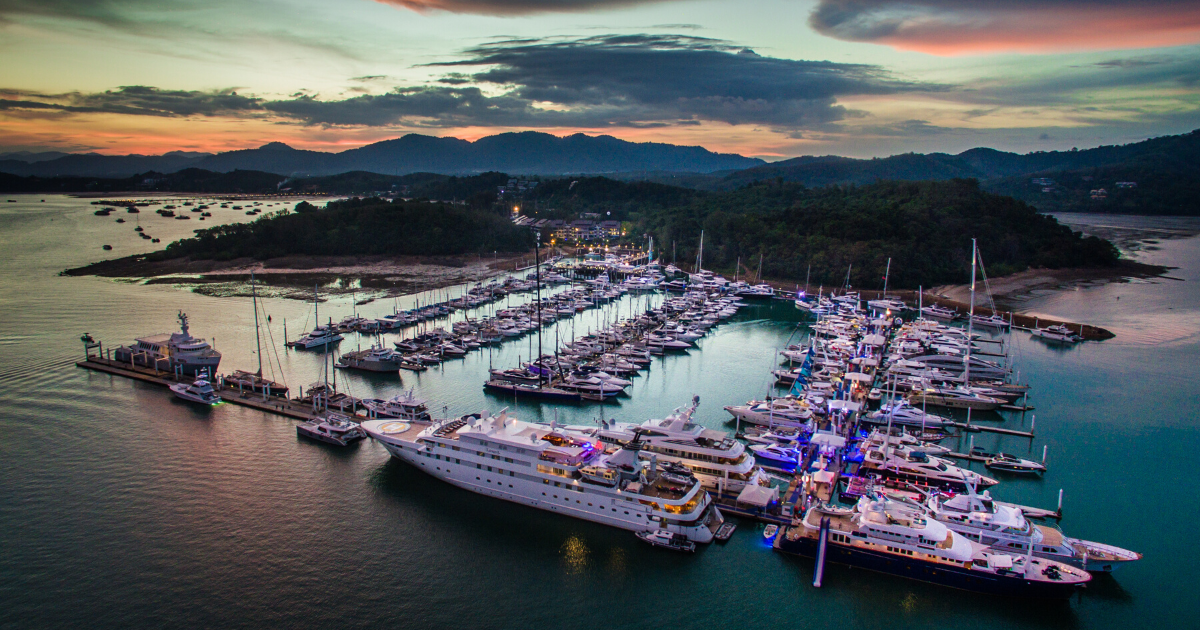 ‘The market is growing and the size and quality of yachts permanently based in Asia gets better every year,’ she says.

‘For example, in Indonesia after Patty Seery started the trend of 6-star luxury phinisi -traditional sailing yachts - with SILOLONA around 2003, others saw that it worked and followed in her footsteps. Now I can easily count more than 20 luxury phinisis, each with their own style and niche market, but all catering to the top end of the market.

‘In Thailand, the number of charter yachts of 30-45m has more than doubled over the past five years. Although many of the yachts are a bit older, they are usually extremely well-maintained with their interiors and furnishings regularly updated.’

‘In the last two years, we have sold several yachts of between 24m and 35m to Asia-based clients and are actively working on two new-build projects. Right now, the 30-35m segment is interesting as many owners are looking for more range and stability. There is also considerable interest at 50-65m for some experienced Asian clients.’

‘Asian clients have high levels of expectation and prefer to avoid disappointment or too much risk,’ Martin adds. ‘A new build can help deliver this providing it is closely managed.’

While government investment and co-operation, coupled with an overhaul of complex marine taxes and regulations is very much required - and will be examined in more detail in a forthcoming feature – one major advantage that Asia-Pacific possesses that is not in dispute is its abundance of pristine and largely uncommercialized world-class cruising waters.

‘The cruising grounds are spectacular, starting from Myanmar down to Thailand, through East Malaysia, the Philippines, Indonesia and all the way to Australia,’ adds Andy. ‘The entire stretch is beautiful and uncrowded. Indonesia alone has over 17,500 islands, many of which are completely untouched. 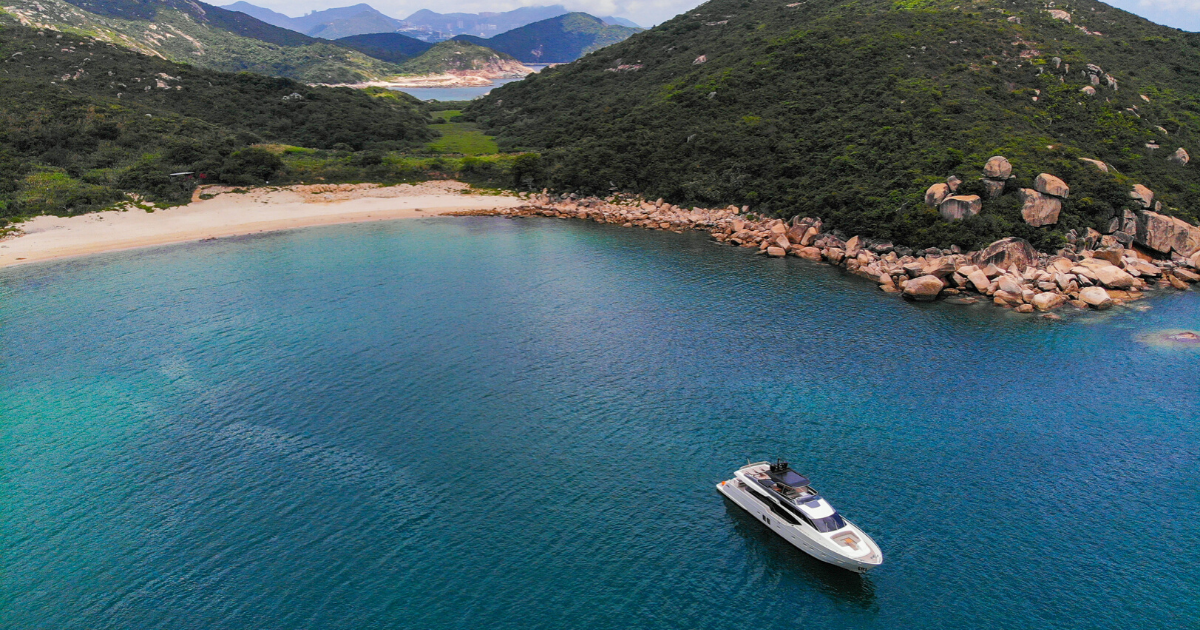 ‘The culture and biodiversity of Asia-Pacific is its single biggest strength; it's a region unlike any other and this should be both celebrated and cherished.

‘Clearly identifying its cruising season and position within the global calendar would really help to establish this region as the world’s third – and in my view, the biggest and best – destination for cruising and charter yachts of all sizes.’

Andy is keen to emphasize that SEA is not in any way attempting to compete with the Caribbean. On the contrary, he says: ‘We are just trying to grow the whole market. The Caribbean is the best place for wintering in the world at the moment - but they are running out of clients, as is Europe. We could foresee maybe 10% growth in Europe of the number of owners and charterers, and perhaps 15% growth in the US, too - but with a third of the world’s wealth in Asia, yet less than 1% yacht ownership here, this is undoubtedly where the potential for global growth will come from.

‘When thousands of new Asian clients start trying the yachting lifestyle, which they would do if their governments allowed us to bring yachts here for them to charter, they will want to explore regions that are new to them - the Caribbean and the Med. Some of the clients who have been sailing the Caribbean for the last 40 winters – and those numbers have halved in the last 10 years - will want to come to Asia for a change.  Every sector can benefit but for that to happen, governments here need to back us in our project to turning ASEAN destinations like Thailand, Myanmar and Indonesia into the Mediterranean of Asia.

‘When those governments realise that the liberated yacht tourism we are pushing for is good, high-spending, yet sustainable tourism, and they change the regulations accordingly to allow yachting to happen here, the sky is the limit.’

Meanwhile, as COVID-19 continues to dominate, Andy remains positive about progress continuing to be made in SEA once the crisis becomes more manageable.

‘We were the first international boat show to have to postpone, sadly, and we may well be one of the first to open again,’ he says of SYS. ‘I believe there will be renewed interest in boating generally after this horrible period is over. Being away at sea together with your close friends and family is likely to be an ever-more appealing idea for people who can afford to take up this lifestyle.

‘The huge latent market in Asia, coupled with the surge in interest we have seen over the last few years, has convinced me that, provided even just one of the more far-seeing governments here decides to open up their waters, the market will really start to take off in the region.

‘Despite the current chaos, we have at last been able to launch the new Hong Kong Yacht Show, completing the vital northern point of the Asian yachting market "golden triangle” and we are hopeful that the rescheduled Singapore Yacht Show in October, closely followed by the new Hong Kong Show in November, will give the industry the boost it will badly need by then.’