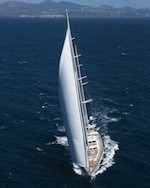 The vision of a pure white sail atop a yacht will stir the heart of any sailor. But what about the sight of several square kilometres of sail, urging a multi-million dollar vessel forward at speeds of up to 20 knots? Well, that’s another league altogether.

Guests who prefer to sail swiftly and silently through the lesser-seen Mediterranean follow in the footsteps of many a celebrated yachtsman. Tristan Rutherford, destinations expert at luxury yacht company Y.CO, details five classic yachting hotspots that evoke the spirit of Agnelli and Onassis.

Pula has been the capital of the Istrian peninsula for 2,000 years. And it shows. One of the world’s greatest Roman amphitheatres commands this romantic seaside town. Thankfully, summer entertainment has switched from gladiators, lions and bears to alfresco opera, theatre and film. The Temple of Augustus forms the axis of Pula’s seafront promenade. The monument – and the surrounding gelato cafés – is as good as any in Rome.

A short sail through the Adriatic Sea from Pula, the Brijuni Islands will astound. Translucent beach-backed bays surround an archipelago covered with forests and forts. Roman emperors holidayed here. A century ago, Viennese business magnate Paul Kupelwieser established a casino, a yacht harbour and Croatia's first golf course on the archipelago. It has classic sailing heritage in spades.

But it was Marshal Tito who really pushed out the boat. The former Yugoslav leader turned the Brijuni islands into a one-man menagerie. Exotic animals were gifted by socialist icons from across the globe. As Gina Lollobrigida and Sophia Loren called on the Marshal, elephants from India’s Indira Gandhi and antelopes from Zambia’s Kenneth Kaunda cavorted by the sea. Richard Burton, King Hussein and Her Royal Highness Queen Elizabeth II all swept in over the years.

Reclining on the Sardinian sand this summer? Then remember that the Costa Smeralda wouldn’t exist without the Aga Khan. The keen sailor was smitten by the colour of the sea – its brilliant emerald hue the result of warm water currents – as he sailed past half a century ago. His Highness certainly had an eye for luxury investment. He picked up part of this coastline in 1961 for the purported sum of $25,000.

These shores have attracted serious yachtsmen for more than five decades. The Bouches de Bonifacio breeze that funnels between Sardinia and the neighbouring island of Corsica renders it a sailor’s dream.

From next year, yachtsmen will have even more to shout about. The launch date of La Maddalena Yacht Club and Marina is still to be confirmed, but when open, it will welcome the world’s largest luxury sailing yachts on the site of what used to be a NATO marine base. Beaulieu has been sailing ground for some of the finest yachtsmen in the world. Legendary American newspaper publisher James Gordon Bennett hosted society parties on his yacht Namouna. Italian industrialist Gianni Agnelli powered through in his yawl Agneta. The blue waters between St Jean and Cap d’Ail have welcomed more luxury yachts than anywhere else on the planet.

In high season, it’s a regatta-style riot. The bay is a billion-dollar vision of vintage yachts and serious sail. Jet skis and tenders are tethered to swim platforms, ready for another parade past Paloma Plage. Yet in late spring and early summer the scene is as serene as the Lérins Islands or Porquerolles. It’s the season of dawn swims, lunchtime waterskis and golden sunset dinners.

This Ionian Sea island’s rocky west coast has thrown sailors off the scent for centuries. But the tiny fishing village of Agios Nikitas is a luxury sailing yacht secret, with excellent beaches to either side that can only be reached by sea. Near the southern tip of the island, Porto Katsiki is a spectacular crescent of wide sand and turquoise water. Once again, geography places it off-limits to those visitors without a boat.

The great and good have long cruised the area. Winston Churchill, John F. Kennedy and Maria Callas were all fans. The Emir of Qatar dropped his anchor in these translucent seas, and was reportedly so taken that he purchased several islands close to neighbouring Ithaca.

Aristotle Onassis, a shipping tycoon and one of the world’s most famous sailors, is buried nearby on the private island of Skorpios. Onassis purchased the island for some £10,000 in 1962. It reportedly sold this year for close to £100m.

Menorca has a sandy, serene spirit. Its shoreline is one long sprinkle of bays, beach and rock pools, where only thrush and larks disturb the peace. At cocktail hour, sunset sippers cast a weary eye to neighbouring British Admiral Lord Nelson, one of the world’s greatest sailors, was definitely a fan. The sub-tropical island formed the ideal backdrop for the naval commander as he romanced his mistress, Emma Hamilton. Sadly, Napoleon’s military advances put paid to Nelson’s Menorcan musings. By the end of the campaign he’d left his right eye in Corsica, his right arm in Tenerife and his mistress in Napoli.

Today’s sailors should make a beeline for Menorca’s beaches. All are ice white, environmentally protected and tailor-made for silent exploring in a classic luxury sailing yacht. Cala Pregonda is a sandy arc surrounding a millpond bay, just west of the Parc de S’Albufera nature reserve. South of Mahon lie the Cales Coves, a collection of haunting watery caves. This isolated spot is popular with both divers and naturists – pastimes that make for an unusual mix.