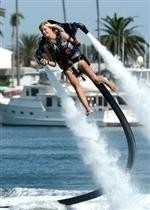 It was the belle of the Fort Lauderdale International Boat Show. One of the first stands you came across after entering the Boat-Builders and Designers Tent. A large space with a jet ski-looking vessel at the center and a couple of futuristic-looking jetpacks standing guard nearby like sentinels. Large crowds gathered around to look at the new toy: a Jetlev – somehow a cross between “The Jetsons” and “Waterworld”.

What the thing really was, however, was a water-powered jetpack. Here’s how it works: Take a jet ski, and instead of pumping water out the stern of the craft to create propulsion, direct that 1,000 gallons of water per minute through a 33-foot-long tube connected to a full-body harness which shoots the water out two exit nozzles – one behind each shoulder – thus creating 420 pounds of thrust. Simply put: It shoots a whole lot of water moving really fast out a couple of tubes connected to the harness, which is connected to you, which in turn sends you up in the air and all over the place. The 200-horsepower engine is controlled by hand throttles and the user can point the nozzles in various directions, allowing them to hover up to 30 feet in the air, move forward at up to 30 miles per hour or even dive under the water. In case someone is a little over-enthusiastic about going under the water for extended periods, the harness is also a floatation device, and will bring them back to the surface and all the fresh air they could hope for once they release the throttle.

The inventor, Raymond Li, is a Chinese-born Canadian. He first sketched the initial concept of what would later become the Jetlev on a yellow Post-It note in 2000. Then he promptly threw in the trash. Three years later, however, he was back at it and testing out the first conceptual models. The team relocated to Dania Beach, Fla., in 2005. By early 2012, they launched the first model – the R200.

The heavy up-front costs – the full R200 system comes in at $99,500 – haven’t prevented the hysteria from catching hold. Already beachfront businesses up and down Florida’s coast have added Jetlevs to their water toy collections, alongside jet skis, paddleboards and catamarans. Jetlev’s commercial launch came in early 2012, and already there are more than 200 Jetlevs in operation around the globe, according to Jetlev spokesman Raphie Aronowitz. Of those, about 65 percent are being used by commercial operators and the remaining are in the hands of individual owners and yachts.

The Jetlev seemed almost omnipresent at the Fort Lauderdale boat show. It’s booth took up prime real estate in the Boat-Builders’ tent. There was a Jetlev pack on display on M/Y Diamonds Are Forever, 61m (200 ft). It was even a part of a very theatrical promotional video for Phantom Services, a yacht security and recovery company. The video was meant to highlight the company’s yacht-recovery arm – a service in which, in the event someone steals your boat, they will steal it back. The video depicted two Navy Seal-types in all-black amphibious gear as they approached and boarded a stolen vessel using Jetlevs, gently touching down on the vessel and ejecting from the harness before surprising the bad guys and re-taking the boat.

Now, the Jetlev Team hopes to be the newest toy on superyachts, as well. The system requires certification. Certification programs take up to four days, though a basic flight lesson for day use is also available. M/Y Shooting Star’s second engineer, Brandon Matley, said flying a Jetlev was the best experience he’s had on a boat.