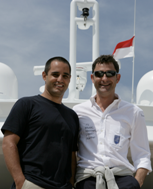 When I was a child, I thought domes on top of yachts were, in fact, water boilers positioned high up to provide pressure for long, hot showers. It's funny I ended up working with something about which I understood so little… Even when it was explained to me that the domes actually contained satellite antennas, I could not stop thinking that yachts would look better without them.

However, this has not been the mainstream opinion for many years. Whereas antennas have decreased in size thanks to technology upgrades, the number of communication and entertainment services required on board has increased: crew and guests want more Internet and TV channels.


For that reason, we have started seeing more domes on smaller and smaller yachts.

On bigger yachts, domes have proliferated even further – to a stage where some fly-bridges now look like pumpkin patches.

Interestingly, a lot of those domes are actually empty – installed for symmetry to match the ones containing the antennas; or at best containing a few smaller items:  horns, GPS antennas or TV aerials, leaving up to 90 per cent of their space empty, just like those silly, big Amazon packaging boxes... But how is it that we have been convinced that domes equate status? How have we grown so attached to them? Is it because they are associated with expensive electronic equipment? (The Macho Theory.) Or is it because they look like child-bearing women? (The Freudian Theory, see the photo courtesy of ADMCOM.IT.)

Either way, I was not positive that the domes were irreplaceable; so I asked yacht designers what they thought about them. And I received a unanimous response: domes are synonymous of disorder, something that introduces ugliness into the design, similar to an unexpected stain.

Then I decided to ask shipyards, and here I had the same sort of answers, though not as radical: a necessary evil, a source of problems when the owner wants larger-than-life domes installed prior to delivery of the newly built yacht.

So we went looking for the technological fix that would allow replacing domes with something that was easier to integrate with the design of contemporary yachts. Drawing on experience from battleships, we have outfitted ourselves with phased array panels.

“Phased Array” means a group of active antennas coupled to a common source to produce a directive radiation pattern. Hence the ability of a flat panel to reproduce the shape of a satellite dish.

The technology behind these panels is bewildering: software controls the electric charge of thousands of small cells to make sure that the respective signals are varied in such a way that the radiation is reinforced in a desired direction and suppressed in another. There are multiple benefits, both in terms of design and performance. In the latter category you can certainly count the much-improved tracking of satellites: in fact, the response time of phased array antennas is much faster than the mechanically stabilised dish, as the software adjusts the shape and the direction more effectively than a series of motors, pulleys and belts. For example: in the event of rough weather conditions, unusual waves or quick steering of the boat, the TV and Internet services continue to work seamlessly.

Underneath the fly-bridge of most motor yachts there are a number of unused, oddly-shaped compartments, which separate the inside ceiling from the outside roof. Often, there is enough space to contain a stabilised phased array panel of around 100cm in length by 30cm in height. Above all, during the design stage, it is possible to embed phased array panels within these hollow areas without compromising the overall aesthetic of the yacht. The fact that the panels are low allows them to be placed just under the fibreglass of the fly-bridge. The designer will have to make sure that obstructive objects are kept away from the radiating area and that the fibreglass used does not exceed a certain thickness, as well as making sure that it remains evenly spread across the surface.

As far as open yachts are concerned, there can be space for hidden installations of the antennas in the fore or the aft, and away from the sun-bathing areas. Again, what makes these installations possible is the low height of the phased array panel as opposed to the diameter of a dish. On board sailing yachts, the installation of these innovative, low-profile antennas can be carried out in 'stealth' mode (as described above for motor yachts) or, should the phased array antennas be installed in a visible position (like the fly-bridge or the mast), the visual impact, resistance to wind, and the weight, would still be dramatically reduced.

With regards to the performance of phased array antennas, on top of the faster and more accurate tracking that we have already spoken about, we can say that these antennas currently provide a like-for-like signal gain with parabolic dishes of the same dimension. In the case of VSAT applications for instance (more challenging than TVSAT), a 100cm-wide by 30cm-tall phased array panel would compare well with a 100cm-diameter conventional dish.

One last benefit of phased arrays as opposed to dishes is the elevation at which the antenna can work. Traditional dish-based antennas struggle with tracking satellites at the two extremes of their elevation angle: 0 and 90 degrees. They work best with elevations between 30 and 60 degrees. But the elevation really depends on where you are in relation to where the satellite you wish to track is located. As an example, watching Sky Sports in Antibes requires a different elevation angle than is required in Cyprus, because the latter sits at the edge of the coverage area of a satellite that is conveniently located to cover the U.K. Therefore, phased arrays are a way to exploit coverage areas better, reducing the need to upsize the antennas.

But these designs are currently being pioneered only by a bunch of smaller and more innovative companies. It is useful to remember that phased array antennas are just beginning to become available to yachts, so they do not come in the variety of sizes that normal dishes do. There are a number of antennas that are currently being tested, type-approved and certified by the telecom agencies in various countries. This means there are still some limitations to consider, as well as higher prices than orthodox dishes.

However, the time is ripe for design- and performance-oriented customers to get rid of satellite dishes and domes that spoil their yacht design.  As phased array antennas begin to offer high quality TVSAT and Broadband Internet on board, there are alternatives, with more discrete and flexible design features.