Industry » Yacht Technology » Why Are We Still Using Two-Way Radios?
« BACK

Why Are We Still Using Two-Way Radios? 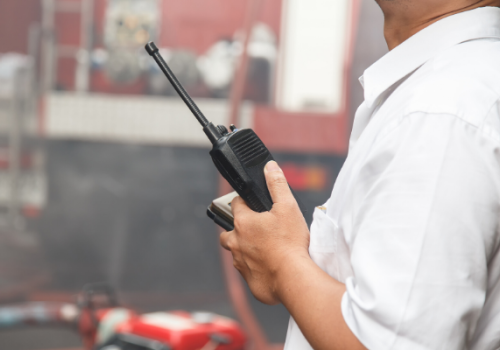 It's 2021 and we are still using two-way radios on board to communicate with our fellow crew members. Why haven't we all moved on to something more sophisticated? It’s as simple as the fact that no alternative is as reliable when it comes to two-way communication.

As seafarers, we sometimes take for granted how isolated we are on board these floating palaces - at times we can be far from both land and any other vessels at all. The harsh reality is that operations are technical and sometimes risky. Many accidents can occur on board and it's essential that both your internal and external communications are well maintained. Your UHF (internal) and VHF (external) radios need to be dependable and trustworthy in case of emergency. It’s our responsibility as crew to make sure the equipment won't let us down by taking care of and maintaining our radios.

What makes a good two-way radio system for yachts?

Communication on board your yacht is vital to ensuring a multitude of functions. For most, knowing which model of radio system to purchase and where to buy it from can be tough. YOT Store is proud to be resellers of the entire range on offer from Motorola, ICOM, and Hytera. Our personnel have extensive onboard experience in collecting, repairing and programming crew radios from all three of the market leaders mentioned above, and we’d like to take this opportunity to share our thoughts and experiences to guide you in what to look for when choosing a two-way radio.

Things to consider when choosing a two-way radio

When it comes to understanding what makes an excellent two-way radio system, you need to look at what makes them essential for your communications on board. Most of the radios in the industry will have similar benefits. Talking from experience, a radio needs to be simple to use and able to withstand a beating - it may get dropped around the engine room or soaked with water by a deckhand. It must also have an excellent battery life to withstand a long day in operation. For those reasons, we favour Motorola's two-way radios due to their simple functionality and durability.

How tough is the device?

Motorola’s design and testing process recreates field conditions across a multitude of industries such as military, emergency services and shipping. Their Enhanced Accelerated Life Testing ensures the reliability and durability of all their products in extreme conditions, so you can have confidence that your Motorola Solutions device is ready for anything, just like we have to be as seafarers.

Drop test: the radio is dropped from 1.2 metres on to a concrete floor. This is repeated several times to test all of the radio’s six different sides. The test is passed if the radio works after every drop. The battery must still be connected and providing continuous current to the device.

Temperature shock: the device is frozen at -70°F for two hours and then heated to +170°F in 15 seconds and kept there for four hours. This is repeated five times for 24 hours. The test is passed if the device is still working correctly after the duration.

Are they waterproof and dust resistant?

When lives depend on you, you can't let dust, grit and dirt slow you down. That's why the Motorola range is tested to the extreme so you can be sure they're ready for anything.

For dust: the radios undergo a dust resistance test. Fine 140 mesh silica flour is blown at the radios for six hours at a wind speed 20 mph.

For water: IP68 waterproof radios are submerged in around 2 metres of water for four hours without a loss of function. There's also a water-resistance test with 50 gallons/hr for 10 mins, and a driven-rain test with four inches of rain/hour in 40 mph wind (30 minutes in each direction).

The radios themselves are feature-rich. Below we have picked out some essentials that aren't always included as standard.

Panic button: is the user feeling threatened or vulnerable? Raise the alert at a push of a button. If an employee feels vulnerable, threatened or even under attack by pirates during their duties, they can immediately press their panic button. The button is easily identifiable on their two-way radio to allow them to call for help quickly. Once pressed, the radio automatically dispatches a text message or tone to the person or team responsible for their security. Text message alarms can be picked up by monitoring stations, security guard radios, mobile phones, pagers and even email accounts. This is great for the vulnerable to be discreet whilst under threat.

Lone worker: there is an automatic alert system to safeguard vulnerable crew members who may find themselves working alone. As a previous sole ETO, I would always find myself working in parts of the ship at random times, occasionally in situations where I could have been at risk. The lone worker feature requires the radio user to press their PTT button on the side of the radio at regular intervals. If the crew member does not check-in at the expected time, they are initially reminded by an audio warning on their radio. If they still do not acknowledge they are OK within a set time, an emergency alarm will alert their colleagues to react quickly to check on their fellow crew.

Man down: monitoring the safety of all crew working at sea should be the highest priority for management companies. You can have peace of mind when you know you have an intuitive two-way radio system that supports the crew as they carry out their duties. The Motorola radios can initiate an emergency alarm when lone workers are injured or unconscious, or a sequence when they sense an abnormal vertical tilt or lack of motion for a pre-defined time. After sending alarms, the radios assist the 'search team’ by emitting a loud audio beacon to pinpoint a distressed worker until they are rescued.

Solas Chapter II-2 Regulation 10.10.4: Solas Chapter 11-2 Regulation 10.10.4 was introduced to protect the vessel and crew; in particular, the crew who are part of the firefighting team. The two-way radios need to be intrinsically safe. Simply, your radios need to be independent, safe to operate and capable of working when something goes wrong on board.

"For ships constructed on or after 1 July 2014, a minimum of two two-way portable radiotelephone apparatus for each fire party for fire-fighter's communication shall be carried on board. Those two-way portable radiotelephone apparatuses shall be of an explosionproof type or intrinsically safe. Ships constructed before 1 July 2014 shall comply with the requirements not later than the first survey after 1 July 2018."

Marine radio systems have to be intrinsically safe, meaning that the wiring is built to withstand high heat, dust and water. This design specification is universal amongst many radios and is a vital part of a Motorola radio make up, making them one of the toughest and most durable on the market today.

Firefighting-clear communications: extreme conditions are expected in missions that require respiratory protection. Thick smoke and noise obstacles not only cause stress, they can also significantly hinder any form of communication. This becomes even more difficult if a chemical protective suit is required. These suits restrict movement and suppress your voice. This is why we always recommend that you use the Dräger FPS-COM 7000 with the full-face mask as it was developed especially for these applications. Each word is transmitted clearly and intelligibly to the members of the team. Most vessels don’t use such a device, they rely on the standard APEX radio clipped to their suit - imagine if you had a fire! With the added noise it would be impossible to send and receive clear communications with the onboard fire teams.

Digital radio technology is commonly used on board yachts and vessels due to several key benefits. One of the main reasons is its reliability when on the water. By linking up to the vessel’s internet network, you can maintain connections to those onboard. In addition, they are notorious for their superior sound quality, making them the perfect option for communicating key messages.

What are the popular Motorola models?

When it comes to choosing your Motorola device, there are a number of models to choose from. To make this decision more comfortable, we have narrowed it down to the two most popular, as well as our personal favourites.

The Motorola SL4010e is the yacht industry’s favourite pocket-sized UHF radio. With a full colour screen, it’s a real winner for many across the maritime sector. The SL4000e is a two-way digital radio that was designed for those that need a full spectrum of control. The SL4000e service is ETSI DMR Standards compliant, as well as being slim and light for ease of carrying around your vessel.

Some of the other features of this radio type include:

- Bluetooth to enable communication without any wires.

- Integrated Wi-Fi enables remote software updates - Text to speech and voice announcement for ease of use. 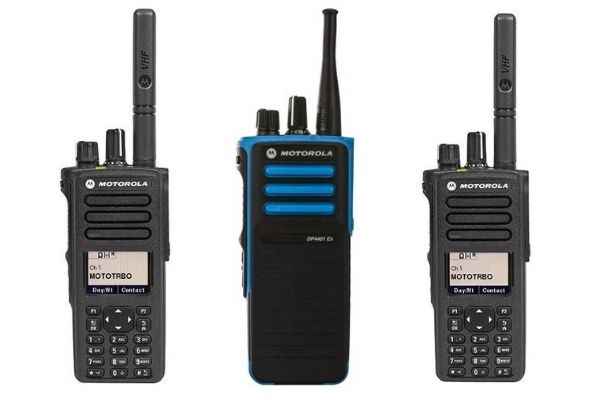 The DP4800 Motorola Radio is well designed and capable in a variety of weather and light conditions, making it great for those that work in a challenging environment. The model has an easy-to-use interface and a large full-colour display.

Some of the other features of this radio type include:

I have seen vessels which needed to purchase additional radios due to the SOLAS requirements. If the mandatory radios don’t work alongside existing radios on board then they are not the right solution. Inadequate communication channels can isolate the fire team from passing on crucial information to the rest of the crew. Decisions on purchases are often made based on budget, but how much value can we put on life or a vessel? The DP4000 Ex Series meets the requirements of SOLAS Chapter II-2 Regulation 10.10.4 for fire-fighter radios carried on board ships. See the Solutions Brief to learn more.

The entire Motorola radio range has accessories for almost all of their makeup which is great, as this allows you to repair the radios instead of throwing them away when a component breaks. Each radio is very customisable allowing you to change the way they operate. Accessories include an antenna range, battery selections and a variety of belt clips. To get the most out of your radio you can also add audio accessories. The accessories are built, tested and certified to the same standards as your Motorola radio.

Radio earpieces: these are generally a must-have on board every charter vessel, and crew members are entirely reliant upon them. From experience, they can become uncomfortable - they will be worn for hours on end, so choosing the right earpiece is essential. There are plenty of Motorola radio earpieces to select from, including both wired and Bluetooth/wireless sets. In the superyacht industry, we want the radio earpiece to look sleek and as discreet as possible (without looking like a Mi5 agent which most crew still look like!). Motorola has the most extensive range of any radio brand with some inconspicuous sets; there are even some skin-coloured wire versions available too.

Additional chargers: you can now simultaneously charge up to six batteries or devices at once with a 6-way multideck. They feature one display to view battery information and a built-in USB interface for charger firmware upgrades and connectivity to the Fleet Management application. See below for comparable solutions and field service items.

Where to buy Motorola radios from?

Now we have taken a look at why you should buy Motorola Radios and what models are most popular, you now need to know where to buy them. Quite simply, YOT Store is your one-stop-shop for all of your AV/IT needs. If you are looking for the latest networking device, or in this case, some top of the range communication devices, click here to be taken straight to our product pages.