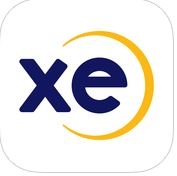 Convert every world currency with the XE Currency App – Free Edition. It offers live proprietary currency rates, charts, and even stores the last updated rates, so it works when the Internet doesn't. This popular app has received 20+ million downloads, appeared as an app of the week on iTunes, and been featured by the BBC, the LA Times, CNN, and The Travel Channel!

We've added an exciting new feature: the XE Rate Advisor. It lets you enter the amount of currency you paid and received to compare a provider's price from the mid-market rate. We’ve also been working on:

Get quick access to the last tool used by swiping left from your currency list
Workout your fingers by swiping up and down to access the next/previous tool
Addition, subtraction, & multiplication is easier with our new calculator layout
We've integrated an ad space that lets us share XE products with you

Let us know your thoughts by leaving us a review or rating.
XE Currency Chums