Industry » Yacht Technology » Marine Apps » WindGURU: Because weather is not absolute!
« BACK

WindGURU: Because weather is not absolute! 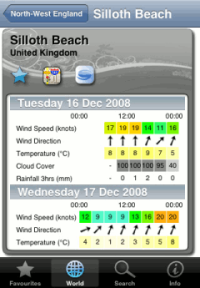 Under the wrong circumstances, WindGURU can be irritatingly accurate. It’s that good. I first started using the website, www.windguru.cz, while living in the U.S. Virgin Islands. It was our primary source to check out sailing conditions – that and a subscription weather service for the oil refinery, the username and password for which had been widely dispersed across the island.

The reason I say “irritatingly” accurate is because, as is the case with things like weather, being right isn’t always good for the user. I specifically recall sitting on our sailboat in Bahía de Sardinas off Culebra with a printout of wind predictions in my hand and a frown on my face because I knew they were right. There was almost no wind. And we needed wind. We needed to make it to Vieques ,which would normally have been a day of mostly downwind sailing. But there was no wind, and none was expected. Our little boat’s motor was not the kind of thing you wanted to rely exclusively upon.

The worst part about it was that the printout was a week old, and yet it was still right. I had talked it off, saying there was no way it could know that far out. But the prediction made six days previously came about exactly as outlined by a spectrum of light blue boxes, which told me just how little wind there was. If the wind were higher, between 15 and 20 knots, the boxes would have been moving along the spectrum from green to yellow to orange.

Small features like this make the website and app easy to read. Even a quick glance and you get the idea just from the colours without looking at any of the various details. It offers forecasts in three-hour increments, featuring wind speed, gusts, wind direction, wave heights, wave direction, temperature. It offers all this for a full week. And for those detail-oriented people out there, it offers hour-by-hour forecasts (from 0400hr to 2200hr) in 48-hour increments.

Captain William Massey uses the forecasts, and he told OnboardOnline that he knows numerous navigators and skippers on both sides of the Atlantic who also use the service. “WindGURU allows you to build a picture of how fast systems are moving. It helps you build a very good picture of what is expected, but not guaranteed,” he said. “Weather is not absolute.”

In addition, Massey did note one issue for Med-based users: about 50 percent of the time, systems move a little faster than predicted, “which is fine as long as you are aware of this,” he said.

WindGURU was originally designed primarily with windsurfers and kitesurfers in mind, hence the stars represent how good wind- and kite-surfing conditions will be.

The forecasts update every six hours. And they don’t officially call them forecasts; they’re “raw model data in human readable format,” according to the site. I tried to read about the details of this and quickly realized three things: it is very complicated, it is very boring, and who really cares so long as it works?

It’s all set up in easy-to-use tables – not exactly for those who prefer looking at a chart. While there are maps available to view, they’re regional, and offer only zoomed-out views of Southwestern Europe or the Lesser Antilles or New England. (Although there is a very detailed map zeroed in on the Czech Republic, where WindGuru is based.) The point is, the charts are really what make the site such a treasure for mariners. Just choose any of the nine geographic areas – from Europe to Oceania – and then choose from the list of countries. And then within each country is another list of various spots. For example, the site offers weather for three spots in Vanuatu, and 462 in France. If you’re not initially sure of an exact spot within a country, you can select a region within the country first – say, the Côte d’Azur, and the site automatically narrows your subsequent spot selection down to a choice of 15 spots along the coast.

And, as with any good weather tool, you can tailor the settings to fit your needs. Much of the information on the site is free, but there is a paid subscription version of the site: WindGURU PRO. The PRO version comes in at a cost of about £16 (or $25) per year, with better deals when you purchase multi-year packages. It offers custom spot forecasts, access to archives, various forecast maps, along with a few other tricks here and there.

“Ultimately, it’s up to the individual how they use it,” Massey said. “But when planning a passage, it’s best to start looking at how the highs and lows are developing three to four days before departure to build a picture and gauge the best departure time in line with shifts in systems.”