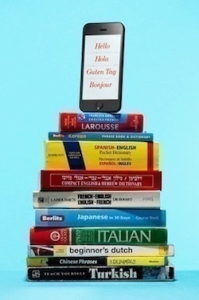 “I speak Spanish to God, Italian to women, French to men, and German to my horse.” ­– Charles V, Holy Roman Emperor.

While English has found prominence in the global marketplace, this has also made native English-speakers notorious around the world as inherently incapable of speaking a foreign language.We at OnboardOnline say, why rest on our laurels?

As yacht crew, we come across a lot of languages while floating around the world.  As the emerging economies join the yacht market and yacht crews become more multicultural, it can only help your job performance to be able to communicate in multiple languages.

Whether you’re going for fluency or brushing up on some polite phrases before your guests arrive, here are five great language-learning apps to help you get where you want to be.

Even better: They’re all (mostly) free.

Given that everyone learns differently, there are several types of programs we’ve selected.

Duolingo has easily the best reputation of all the free language-learning programs. It is also perhaps the most unique program available, because it asks you to translate the Web as you learn a new language.

It operates under some very basic assumptions. Firstly, in order to communicate, we need to know each other’s languages. Secondly, there is a wealth of information online that is language-limited.

“We’ve developed a way for you to learn a language for free while at the same time translating text from the Web, enabling a wealth of language-shackled information to be liberated for all of humanity,” says its promotional video.

After giving you some basic lessons and exercises that help you get your feet under you, Duolingo gives you a sentence to translate from the language you’re learning into your native language. It only gives you sentences that fit your level – with these progressing in difficulty along with your abilities.

The lessons progress in difficulty through basic vocabulary, to grammar, to words and phrases, and in the process, you’re translating real-world content from blogs and websites.

“Learn a language by translating the Web” is the company’s motto.

The only real drawback is that it offers courses solely in European languages. Anki is Japanese for “memorizing.” It is purely rote memorization. It’s a flashcard-based program – but a very smart one at that. It uses ‘Spaced Repetition Software’ to help move certain words through at different speeds. Words you’ve indicated you’re struggling with repeat more frequently until you indicate you have a stronger grasp of them. Once you’re comfortable, they’ll be shown less and less frequently.

This app is widely considered the best of the flashcard-based apps. It may not be as good at helping you understand grammar, but it is a great tool to use for increasing your vocabulary.

You can create your own ‘decks’ of flashcards, or choose from shared decks.

It also offers sound files to help you with pronunciation. This is probably the most interesting form of language acquisition, and may be better than flashcards for visual learners. Essentially, it’s visual flashcards.

Memrise uses ‘memes’ – or visual stimuli – to help you remember things. The funnier the meme, the easier it is to remember, generally. You can create your own memes or use those created by others.

It also comes with audio pronunciations to help get things right verbally.

Conceptually, it’s very similar to the flashcard system, only much more playful and designed to be almost game-like. It offers lots of courses and crowd-sourced information.

Linqapp is most helpful when it comes to aural learning. A lot of times, people can learn to say things or read things in another language, but become lost when confronted by the voice of a native speaker. With Linqapp, you read and (more importantly) listen to texts.

You can click on words you don’t know to get the definition and create up to 100 Linqs – easy-to-access vocab words. Unfortunately, you run through the Linqs pretty quickly and certain features require a monthly fee.

It’s not very good for beginners, but can be good supplemental practice for people in the intermediate to advanced phases of learning.

Languages: English, Spanish, Arabic, German, Russian, Portuguese, Italian, Chinese, and just about anything else you could imagine.

This is the most traditional language course available with semi-free status. Busuu has interactive lessons from Beginner to Advanced, tons of vocabulary categorized in 150 different day-to-day topics, audio-visual options, and more. It really has it all.

And it has a huge online community where you can be corrected by native speakers.

However, you only get 20 courses for free, after which you have to start paying.

Remember, as different cultures enter the yacht market and more languages are spoken onboard, it is increasingly important to be able to say hello- in any language!