Industry » Features » Yachts: From Concept to Reality
« BACK

Yachts: From Concept to Reality 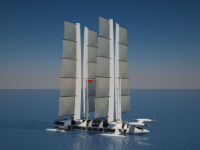 In yachting everything starts with the dream – the vision of doing something, being somewhere else and sitting on your yacht.

If the yacht is at sea, the waves will not be too big or the sun unbearable. If at anchor or by a pontoon, you can raise your glass to the neighbour whose yacht will be quite splendid, but not quite as splendid as yours. But is reality ever quite up to the dream?

My own sailing began with a dream. I was just a boy watching black-and-white TV coverage of a tiny yacht surrounded by gigantic wind-swept waves. The yacht was Gipsy Moth IV rounding Cape Horn with Sir Francis Chichester at the helm. I didn’t know much about Cape Horn, only that it was at the southern tip of South America and that the waves there were bigger than houses. I’d like to sail there one day, I thought. While I didn’t do much about it, I never quite forgot that dream. So when I was in my 40th year and Sir Chay Blyth asked me which leg of his round-the-world race I’d like to do, I replied: “The one with Cape Horn in it.”

I didn’t ask where the leg began or where it ended. Cape Horn and round-the-world voyage were synonymous in my mind. Little wonder that Blyth buried his face in his hands and sighed. “You know you could die?” he said.

He felt it necessary to remind all those who embarked on the BT Challenge of this possibility. “It’s a race around the globe the wrong way, against the winds and currents. More people have gone in to space, than round the horn from east to west.”

I nodded, feeling suddenly rather selfish since my wife and family were allowing me to go. He didn’t say: “You know this leg is 6,000 miles, covering one of the loneliest most inhospitable parts of the planet. It will take you 43 days to race from Rio de Janeiro in Brazil to Wellington in New Zealand. You’ll feel like you’ve crawled in to a washing machine. You’ll be physically sick on 11 of those days while feeling unbelievably nauseous for much of the rest of the time.”

No, he didn’t say that and, had he done so, I would have shrugged the shrug of those - and that’s most people - who have no idea what this means. Even though I was blessed with a vivid imagination, nothing could have prepared me for this experience. I’d sailed a couple of times before, not far, so my sailing knowledge was a blank slate. This may have been the best preparation of all, since it’s difficult for fear to take root in a desert of ignorance.

During that race I had plenty of opportunities lying in my bunk to ponder these things. I took three books with me, and I would recommend them all for a long sea voyage: Two Years Before the Mast, by Richard Henry Dana Junior; Sailing Alone Around The World, by Joshua Slocum, and Poem for a Day, a collection edited by Nicholas Albery.

In Dana’s book I could share the hardship, in Slocum’s, the loneliness and in the anthology there were little gems such as All Things Pass by Lao Tzu. If I’m ever incarcerated, this adaptation of the poem by Timothy Leary will share my prison cell:

These change
And if these do not last

Take things as they come It’s not difficult to portray my part in this race as one of undiluted misery. Yet that’s far from the case. It was one of the defining experiences of my life and the friends I made on that journey are friends today, to no small extent, I’m sure, because of our shared experience.

The biggest irony of all, perhaps, was that Cape Horn itself was relatively benign during our rounding, and I had little sense of the place since we passed by during the night.

The craziest thing is that, armed with my new knowledge of sailing, I went on to share my breakfasts with other seas and oceans. Yes, I’ve fed the fishes on races all over the world and no longer need to stretch my imagination to work out what’s involved.

And yet I continue to entertain a stupid sense of optimism that the breezes will be gentle and the sea somehow more accommodating. Another attraction is that these days I know a little more about what’s going on and can better assist with the process. It helps, of course, if you’re aboard something by Perini Navi or Dubois off Sardinia, say, with an owner whose idea of a stiff breeze is a force 5. This brings me back to the beginning and the vision.

The vision is important for boat builders and designers engaged in ensnaring the imagination of a potential owner. Maybe I should use the word capturing rather than ensnaring, but, whatever your view, be assured that these people are masters in the art of seduction.

I’m taking my inspiration just now from a collection of concept yachts pulled together by the Pendennis yard for this year’s Monaco Yacht Show. Here’s an excerpt from the blurb alongside an Andrew Winch design for a three-masted Schooner:

“Entertain your guests with cocktails and canapés as the sun sets in Portofino harbour. Experience the splendour of a bygone era sailing into St Petersburg on mid Summer’s eve. Be enthralled by the L'Orfeo opera before unwinding on your yacht in Venice harbour. Race alongside the great J’s as you compete for the St Barth's Bucket. Enjoy the romance and sophistication of a classic sailing masterpiece.”

And, finally, the punch line: “Let Andrew Winch Designs and Pendennis build the yacht of your dreams - the ‘Best of British’”. How could you resist? Just be aware that the dream is just that. The design blurb won’t tell you about the Italian customs launch whose crew is just about to board your boat in Portofino harbour and rifle through your safe and cabins. It won’t mention the Russian boarder police who’ll find some minor error in your visa - as they did in mine. “It says here you’re a woman,” said the border official on my last visit to St Petersburg. That took a bit of explaining, I can tell you.

It doesn’t tell you about the grief you’ll have at the opera when the tenor has come down with a throat infection and fallen out with the mezzo soprano, or the gouge the size of a small car that the over-competitive J-class crew will inflict on your bow in the next race. It doesn’t tell you about that immutable law of life that is shared between rich and poor alike – shit happens.

To do so, would be to spoil the dream, and no-one wants that. In fact I’d go so far as to suggest that dreaming the dream, often while following the build of your superyacht through the sweat, toil, snags and heartache, is the best part of ordering and buying your boat. Dreams are not inflicted with reality. Entrepreneurs, the most successful of whom are the very people who buy the biggest yachts, get their buzz from building a business, from clinching a deal, just as a mountaineer’s heart soars at the moment of reaching the pinnacle. After that, it’s all downhill to the place where dreams are created and plans made for the next journey.

This might explain why Canadian billionaire Michael Lee-Chin, sold on his magnificent Lürssen yacht, the 86m Quattroelle, within a year of taking ownership. He’d watched his dream take shape. The mission had been fulfilled.

And yet sometimes in yachting, reality can deliver something beyond the dream, something that not even the most imaginative of designers can envisage.

Earlier this year I asked Kit Goldsbury Jr, the owner of the yacht, Christopher, what was the best of all the experiences his family had shared on their travels around the world.

“It was in the south seas, looking in to the eye of a whale just a few feet away. That was something I wouldn’t have experienced without the yacht.” Everyone who has sailed long enough will have something like this they will treasure for the rest of their days. For me, it comes down not so much to single experiences but the shared experience with others, the bonds you enjoy at sea that are difficult to replicate on land; that and the freedom to live and to think outside the restraints of time and the daily diary. A sea voyage gives you that and that’s a vision worth preserving.