Industry » Features » Suicide: The Peril of Life on the High Seas
« BACK

Suicide: The Peril of Life on the High Seas 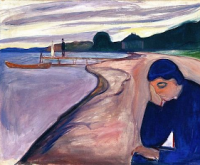 Life onboard a ship is full of peril. There is heavy machinery and the ever-present threat posed by Mother Nature. There is the risk of being far removed from civilization and modern medicine, and the risk posed by the physical and emotional distance from loved ones.

And that’s to say nothing of the potential risk we can all pose to ourselves in moments of high stress and anxiety.

All of these factors compound to make suicide a very real danger to seafarers. In fact, according to a recent study by the World Health Organization (WHO), seafarers are the second most at-risk profession worldwide when it comes to suicide.

The report offered up some startling statistics, but the high rate of suicide among those who work at sea is nothing new. The dangers haven’t necessarily changed, only the official figures vary slightly.

“The data on suicides proves that the mental health of seafarers in many cases continues to be very poor and often fatal,” wrote Robert Iversen, who is a leading researcher and advocate on behalf of the mental health of seafarers. “With deaths aboard merchant ships resulting from depression leading to suicide being widely reported, the damage to seafarers, their families, and ship owners cannot be ignored.”

Iversen has been at the forefront of offering seafarers help and alternatives in Australia, and his methods have gained widespread recognition. Iversen has called it a “disgrace” that “seafarer suicides should be so high,” and has called on the entire industry to fix the problem.

To say the WHO’s report on suicide came as a shock within the shipping industry would be like saying that Vladimir Putin was shocked to learn that N.A.T.O. countries are in opposition to the Russian intervention in Ukraine. Suffice it to say, this was nothing new.

What the report did, however, was to put the matter into perspective in a highly public way that couldn’t simply be ignored.

One of the problems in studying suicide among seafarers has always been finding reliable statistics. After all, there is a major element of uncertainty regarding the number of sailors who have disappeared at sea, and under what circumstances this has tended to happen. How many of them are intentional and how many accidental?

The truth is, we may never quite know. However, according to several experts, it is believed that close to half of those “disappearances” (though some argue more) should actually be considered suicides.

Not including any of the disappeared, the figures were still sobering. Iversen studied statistics of seafarer deaths from 1960 through 2009 and came up with a startlingly high figure. Of more than 17,000 deaths, nearly 6 percent were suicides.

“These percentages would be higher if 50 percent of deaths due to seafarers disappearing at sea were included,” noted Iversen in International Maritime Health.

Other studies have produced similar conclusions. A study on suicides among the U.K. merchant fleet between 1919 and 2005 in the journal of Occupational Medicine found that the rate has fluctuated but remained high throughout the years, hitting a peak in the 1960s.

“There has been a sharp fall in the suicide rate in the last 40 years,” the study noted. “Likely reasons for this include reductions over time in long intercontinental voyages and changes over time in seafarers’ lifestyle.”

Another study which investigated the deaths of Polish seafarers in the Journal of Travel Medicine also found a higher-than-average suicide rate, although the article’s main point was to emphasize how dangerous the profession is overall. One of the factors that puts seafarers at such high risk of suicide is the ever-present risk that surround them.

According to the study on Polish seafarers: “The work on seagoing vessels is long associated with an increased risk of loss of health and life. This is attributed to specific conditions at sea, poor availability and increased delay of medical assistance, lack of possible evacuation from danger, high accident rate, exposure to extreme weather conditions, and mental and physical stress.”

In fact, the mortality rate found among seafarers in the study was astronomical. Between 1985 and 1994, the annual rate of deaths was 241 per 100,000 seafarers. The study also notes that where you work makes a difference, with officers less likely to die on the job than those who work on the deck or in the engine department.

That knowledge alone can be too much for some people. Historially, the manner in which seafarers have coped with stress and anxiety is of particular note, as rates of alcoholism and drug use put seafarers at an elevated risk.

“These factors are thought to result not only in a high mortality rate among seafarers at sea, but also among seamen when on land, thus shortening the average seafarers’ life span,” the study found.

It certainly doesn’t help that men engaged in a high-risk profession are also kept apart from their families and support networks for long periods, and that the fast turnaround times of modern ships results in limited time ashore.

According to an article in Psychological Medicine, there is one more key contributing factor: easy access to a means of committing suicide.

“High occupational suicide rates are often linked to easy occupational access to a method of suicide,” the study said. There is a lot of discussion about how to prevent these unfortunate and unnecessary deaths. Some, like Peter Cremers, the CEO of Anglo-Eastern Ship Management, have been quoted as claiming that increased access to communications – things like email and Skype – have only contributed to the high suicide rates, because it makes people miss their family and friends more acutely and can bring in unwanted stresses from home-life on board.

But others, like Stephen Cockerill, a master with DFDS Seaways, believes the opposite to be true. He feels that improved and increased access to communications with home can only benefit those on board.

In fact, technology in general (and social media, in particular) has been used increasingly to detect and head-off signs of depression and suicide. According to an article in The Atlantic, organizations like the National Suicide Prevention LifeLine have established Facebook- and Twitter-based apps that allow users to report worrisome updates and messages. These reports trigger a counselor to respond to the situation.

Similarly, Google has partnered with groups in order to utilize its search algorithms so that when someone searches anything with trigger-words, the top sponsored content is suicide-prevention resources.

However, Iversen has indicated that this is not enough for seafarers who operate under unique and often isolated circumstances.

In one article written by Iversen, a seaman named “Chris B.,” offered his suggestions: four-month-maximum tour lengths with equal shore leave; better quality food; free and greater access to the internet; and a safety culture that “doesn’t just pay lip service to it.”

Iversen has helped to spearhead an initiative based out of Australian ports which is aimed at drawing attention to the problem. Along with the Melbourne Port Welfare Association and BeyondBlue, Iversen has helped to develop suicide prevention pamphlets in a variety of languages which are available at several of the country’s most heavily trafficked ports.

The pamphlets offer a depression checklist to help crew determine if either they, or their crewmates, might be experiencing depression and be at risk of suicide. It discusses the cultural differences that may prevent some at-risk personnel from reaching out for help. And it discusses the best ways of approaching someone about the subject in a supportive and helpful manner.

So far, the initiative says the take-up has been impressive and that seafarers are clearly benefitting from the pamphlet. One chief officer went to a doctor and received treatment and counseling for anxiety and depression, while many others have been similarly assisted.

However, there have also been calls for changes to how the shipping industry operates. By many accounts, commercial ships can be incredibly lonely places, where meals are eaten in silence and crew interaction is minimal.

There have been comparisons drawn with the military, and some analysts have claimed that the commercial sector could benefit from the forced interaction and constant drilling that the military maintains on board – not only for operational reasons, but for crew morale.

Whatever the changes may be, it appears that the shipping companies are taking notice and changes are coming.

Unfortunately, as is so often the case, it takes an economic incentive for action to be taken, and Iversen has addressed this in his studies by offering up an economic  argument. He noted that “loss of crew stemming from mental illness, suicide or disappearance at sea can take ships out of service for several days.” Given that many ships cost around $10,000 per day to operate, this can mean tens of thousands of dollars in lost revenue.

This information “strongly demonstrates the need for everybody connected with the international maritime shipping industry to do something about it,” Iversen said. “The mental health of seafarers and the economic health of the shipping industry will be improved as a result.”