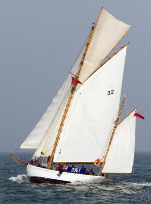 When I was 14, I left school to become autonomously home educated. I was frustrated with the stifling school environment and was already finding success through my own ventures – including a website I created at 13 which attracted global media attention and received over 150,000 unique visits per day. So, school wasn’t really my thing.

I joined a local home education group to meet new friends and take informal classes together. One year, we raised funding to go on a residential sail training voyage with The Cirdan Sailing Trust. We chartered three of the Trust’s vessels and spent four days learning to sail around the east coast of England. I was 16 at the time and was so inspired by the trip, that my skipper invited me back to volunteer with Cirdan. Seven years later, I am still volunteering with Cirdan. I have taken on a number of roles onboard their boats, ranging from 2nd mate on 73ft wooden ketch Faramir, to watchleader on their 105ft gaff ex-Baltic trader Queen Galadriel. Most recently I acted as Group Leader aboard Cirdan’s 101-year-old classic gaff yawl Duet, taking a bunch of 12-16 year olds on a week-long voyage around the East Coast and Thames Estuary. It was perhaps the hardest week’s work I have ever done in my life, but incredibly rewarding – not only do the young people learn the basics of sailing in order to gain their RYA Competent Crew certificates, but they have to live together and cook for the rest of the boat. I particularly enjoyed helping the young people create wholesome, hearty meals from scratch – for some, it was the first time they had ever seen a bulb of garlic or chopped up a pepper. One afternoon, we even baked some scones whilst sailing along, the young people so proud of their creations. That’s a beautiful memory none of us will ever forget. The work that Cirdan does is absolutely effective. It gives young people the chance to leave their usual home situations and develop their characters in a challenging environment where they are treated like adults and given important responsibilities.

Through my volunteering with Cirdan, I am grateful to have been sponsored by Trinity House and ASTO and am now qualified up to RYA Yachtmaster Coastal and Ocean theory. I have also been inspired to buy my own sailing boat, which I have lived on for almost five years after moving out of home at the age of 18.

If that wasn’t enough for me to be thankful about, Cirdan have given me the awesome opportunity to sail as part of the crew onboard Duet in the notorious offshore Rolex Fastnet race this August 2013. This will be the second time that Duet has taken part in the Fastnet – in 1975 she won three trophies (including one for line honours). Our aim is to use our Fastnet campaign to fundraise as much as we can for Cirdan, helping support other worthy young people on voyages with them. Who knows – perhaps we’ll fund a young person who ends up writing a similar article to this in five years’ time? You can support our fundraising here - even the smallest contributions are much appreciated: http://www.justgiving.com/duetfastnet

Click for more information about the Cirdan Sailing Trust

Duet, the 1912 built, gaff-rigged yawl, which is a familiar site on the east coast, has just arrived at Fox’s Marina & Boatyard for some general maintenance and essential electronics work, including fitting a Garmin GPS Plotter and AIS system, ahead of competing in this year’s Rolex Fastnet Race. Duet is a regular visitor to Fox’s Boatyard, which has maintained the yacht for a number of years, along with her sisterships, Queen Galadriel and the wooden Bermudan ketch, Faramir, which was built here at Fox’s Marina.

Duet is owned by the Courtald family and loaned to the Cirdan Sailing Trust, in support of their important work. She is believed to be Britain’s longest serving sail training vessel and has sailed over 250,000 miles with over 8000 young people on board. MCA Marine Surveyor and Naval Architect, David Cannell, has chartered Duet to take part in the Fastnet Race, with the intention of raising the Cirdan Sailing Trust’s profile and supporting the Trust’s work with young people. David has selected most of his crew for the event but may still be on the lookout for keen sailors to undertake the challenge with him. For more information please contact David Cannell by email: david@dmcmarine.com

The Royal Ocean Racing Club’s blue riband event, the biennial 608-nautical mile Fastnet Race, which starts on Sunday 11 August, will see a record entry of 380 boats take part from around the world and is considered one of the toughest challenges in offshore yacht racing.

Click for more information about the RORC Rolex Fastnet Race