Industry » Features » MYBA: Beyond the Med
« BACK

MYBA: Beyond the Med 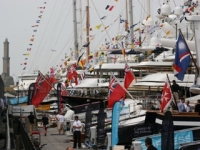 The origins of MYBA – The Worldwide Yachting Association – are steeped in pragmatism. It’s as simple as this: A group of professionals in yacht brokerage and sales got together to create a standardized contract because they were tired of haggling over the details of multiple contracts for each new sale or charter.

That same pragmatism informs MYBA still today. It’s the reason MYBAnet was developed, a centralized platform for charter yacht listings. It's the reason why MYBA maintains a library of contracts in all European languages as well as Russian, and up to the minute advice from a team of legal and tax experts. It’s also the reason for its advocacy initiatives.

It all makes doing business easier.

The economic crisis only intensified this aim, and MYBA has taken on a wider role in shaping and promoting the yachting industry as a whole.

“It is part of the MYBA philosophy which has led to an increased advocacy role,” says MYBA General Secretary Coralyn Tracey. “Increased awareness that MYBA as a body must react dynamically.”

It has done this in a number of ways. It became a member of ICOMIA (International Council of Marine Industry Associations) and has funded that organization’s seat at the IMO (International Maritime Organization) to give the superyacht industry a seat at the table. And it funded several economic impact studies to produce concrete evidence about how important superyachts are to the wider economy.

Thirty years and still going strong, still a driving force in superyachts. There is little indication that any of that will change.

MYBA was formed thirty years ago. Back then, each company used a preferred contract, and often this meant two or three contracts had to be worked into one. This happened every time a new charter was confirmed. “A great deal of time was being lost and a great deal of energy was being spent and probably a great deal many lawyers were enjoying that pretty much every charter that you did, there were quite detailed contractual negotiations,” says Maclaurin, who is a commercial manager with Ocean Independence.

The shared frustration of several key players turned into a shared interest in finding a solution. It was out of this that MYBA formed: The Mediterranean Yacht Brokers Association. Soon enough, with the help of several lawyers, the MYBA Sales and Purchase Agreement (MoA) was created. The MYBA Charter Agreement followed not long after.

“These two contracts went a long way in contributing to the stability, success and growth our niche of the industry has experienced,” says Tracey.

Over the next decade, the boom in boats and technology enabled MYBA to step in once again. This time, it targeted the slow-moving and fractured process of boat promotion.

“I’m going to sound like a really old person now, but when I started in this industry, fax was new and we did all our presentations by fax,” says Fiona Maureso, the vice president of MYBA and charter director at Northrop & Johnson. “To show photos, we had to send them by post. It took ages to put a charter together.”

This is why MYBAnet was born. The creation of a centralized database meant that brokers no longer had to maintain their own records and call around for dates and availability, while it freed up central agencies from the job of mailing out printd brochures and fielding endless calls.

Access to MYBAnet was through paid subscription, and limited to professional brokers vetted by MYBA.

The income generated from subscriptions and from the MYBA Charter Yacht Show in Genoa every year have helped make MYBA one of the better-funded yachting associations. Together with the central role they play in the day-to-day functioning of the yachting industry, MYBA is now a serious institution recognized across the world.

It was for this reason that in 2007, MYBA officially changed its strapline to: MYBA: The Worldwide Yachting Association.

MYBAnet was replaced by YACHTFOLIO last year. “It’s exactly the same, it’s just MYBAnet had been around for a long time and it was written on a platform that was proving to be a little unstable. It wasn’t modern enough for us to develop it and bolt on some of the features that are necessary in the modern world,” says Maureso, who also chairs MYBA’s IT panel. “For example, it was impossible to do an app. The very things we wanted to do, we couldn’t do with MYBAnet. And so we had to start from scratch, and that’s what YACHTFOLIO is: It’s MYBAnet reincarnated on a more stable, more modern platform.” The rollout has been received well by brokers, who have been “crying out for it for ages,” says Maureso. The initial launch three years ago failed dramatically.

“It wasn’t ready,” she admits. “So this time we were very careful and it launched successfully.”

YACHTFOLIO will be optimized for the iPad and other tablets. It’s also accessible by smartphone (though not optimized for them) and there are plans to develop an app. There are more than 1,400 charter yachts listed worldwide, says Tracey.

“It’s really the focus of all our interest at the moment because it’s so important, says Maureso. “That’s what everybody wants and needs – instant access to information.”

The costs would be much higher if YACHTFOLIO or MCS were run by private companies. Take the Monaco Yacht Show, says Maclaurin. It is run by a private company, not an industry association, and the costs are often back-breaking. That show alone accounts for about 25 percent of Ocean Independence’s annual marketing budget, he says. MYBA’s advocacy initiatives follow this same logic. In the 90s, MYBA lobbied the French government by hiring the highly reputed French legal firm, Bureau Francis Lefebvre, which resulted in the commercial status of yachts, says Tracey. Recently they have contracted with the European Boating Industry to represent superyacht interests before the European Union.

MYBA has also funded two economic impact studies. The first was focused on the Balearics to help them campaign to revoke the matriculation tax, which turned out to be “quite successful,” notes Maclaurin.

The second was a wider study commissioned with the London School of Economics. The study was published in March 2013, and showed that across five countries – Italy, Spain, France, Greece and the Netherlands – there was over 5 billion euros worth of positive impact in their economies.

“This is something MYBA can do because we do have the money,” says Maclaurin. “We’re spending tens of thousands of euros on this initiative and it’s not going to benefit only us.”

MYBA has often been criticized for what some have called ‘exclusionary’ tactics. Most often these have been employed at the expense of startups – especially the online brokerages.

“Initially there was huge resistance from MYBA to the online startup companies,” admits Maureso. “But over the years, we’ve all had to accept that this is the future. People are working more and more not from a fixed desk somewhere – they’re more mobile.” However, within MYBA it had more to do with maintaining standards of practice than it did fear of competition, its officials say. “When the market was overheated, what was lacking was quality,” says Maclaurin. “Since the crisis, I think we’ve gotten back to the core values of brokerage, which is to give good, solid, professional advice to clients.”

This is why MYBA requires all members to have professional indemnity insurance – and members must prove this annually. The imperative now is to ensure that those standards spread throughout the industry.

“I think we can expect MYBA's interest in improvements and change to go farther afield where necessary, and to deepen as we move forward and better understand how, and where, to be more involved,” says Tracey. “Wherever possible, funds will be made available to make the right kind of change happen.”