What travels faster than a nuclear submarine, Usain Bolt on a good day, or a dolphin?  What’s the same length as a jumbo jet, but is built with aluminium three times as thick?

What makes this yacht revolutionary is the shape of its hull. Galactica Star boasts the world’s first Fast Displacement Hull Form (FDHF), a hull so fast and fuel efficient that during tank-testing at the Wolfson facility in Southhampton, the results were so spectacular that they assumed there’d been a mistake, and ran the tests again.

What they were onto, quite simply, was the most efficient displacement hull design that had ever been tested, a yacht which performs 30% more efficiently over the 15-30 knot range. With a maximum speed of 28.8 knots, this thing is both fast and significantly more efficient, something few expected from a yard so well known for its perfomance aluminium yachts.

In an industry where a 5% gain in efficiency is considered a triumph, 30% is something again entirely. Fast hulls normally have angular planes on the underbody called hard chines, which provide the lift required to achieve planing speeds.  However, at low speeds the transom sinks deeper, thereby increasing the draught and dragging tons of dead water behind it.

To avoid this problem, Van Oossanen Naval Architects designed a hull with a specific bulbous bow, a slender fore body and a shallow transom area that is barely submerged.

The shallow transom allows for bigger, more efficient propellers, while a metal plate attached below the waterline ‘intercepts’ the water flowing under the hull, thereby lifting the yacht and improving its horizontal trim.

The FDHF has created a yacht that doesn’t rise out of the water or trim up at the bow, but stays horizontal and cuts through the waves.

The benefits are clear to the owner: the yacht goes faster, uses less fuel, is more efficient and has a longer range. It also provides a smoother ride because it is no longer victim of the ‘resistance hump’, and the smaller engines mean that the yacht is quieter underway.

Of course, smaller engines and higher efficiency mean less space needed for bunkering, an opportunity that the designers of Galactica Star seized upon to increase guest spaces, and use them in an innovative way.

Frank Laupman of Omega Architects admits that it was a challenge to design a big boat without sacrificing the sporty look that Heesen clients expect.  After many years working in collaboration with Heesen, ‘the biggest design challenge was to move away from the recognised platforms, because you have to deny what has almost become a part of yourself.’  Laupman certainly rose to the challenge.

The exterior design of Galactica Star is low and sleek, avoiding the stacked look of many superyachts, while the horizontal length is highlighted by the graceful arches or flying buttresses in the stern, thereby keeping the sporty look associated with Heesens, along with the iconic reverse pelican bow.

The full-beam tender garage is housed under two gull wing doors in the bow, freeing up the aft to be transformed into an 80sq/m beach club with two spacious platforms. 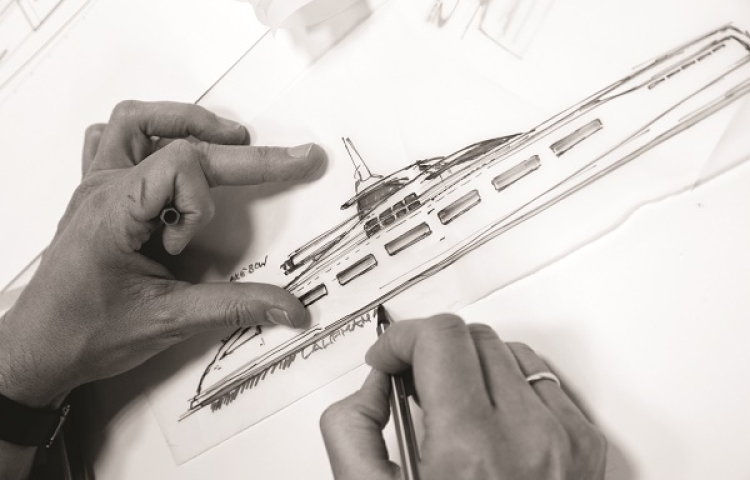 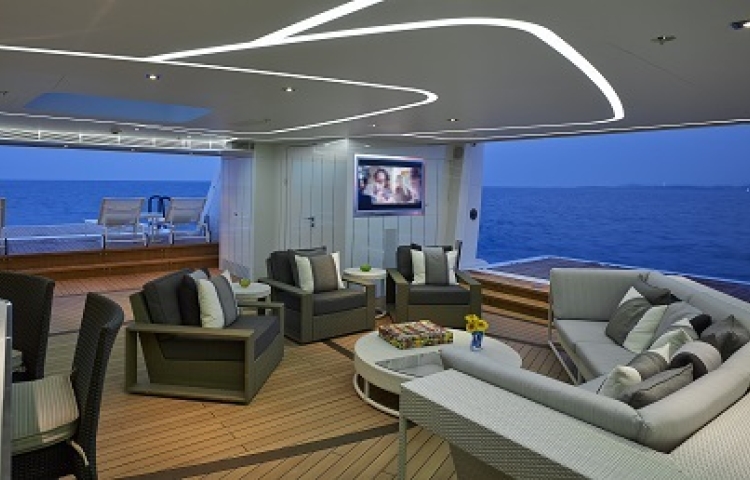 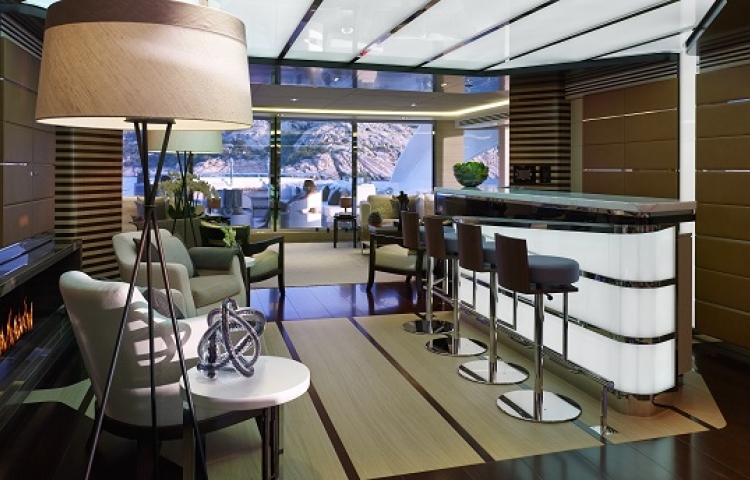 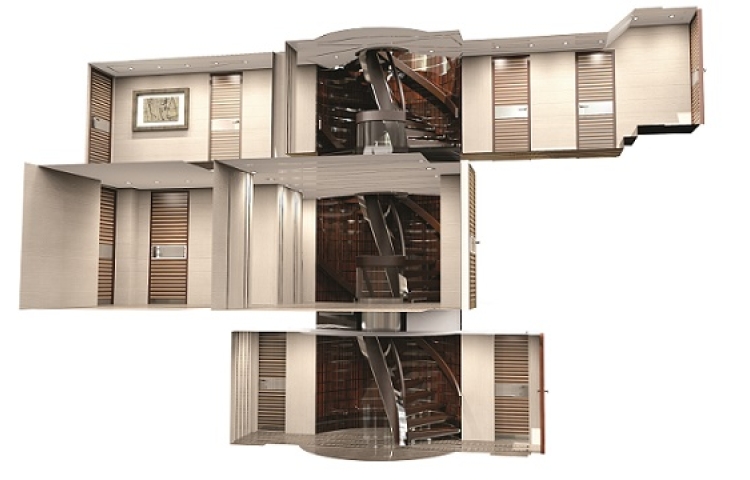 This is a stunning space, put to perfect use by interior designers Bannenberg & Rowell. Pale wood panelling gives a sense of lightness, while the glass bottom of the pool overhead plays watery patterns across the wooden floor. This space succeeds where many superyachts do not- to utilise the space closest to the water, in a room that feels stylish, airy and very much like a home.  It’s air-conditioned, with comfy sofas and a large plasma TV- there’s even a beer tap, offering frosty draught beer. Yes, it’s a detail, but a lovely one.

Now to drag ourselves away, and up the stairs to another oft-ignored space, the aft deck.

This is designed as an extension of the beach club below, where a rigid glass awning shades comfortable loungers, and steps lead up to a slightly raised pool.

Moving forward, there’s yet another entertaining space on the foredeck for cocktails and canapes, which can also be used as a dance floor, a sunbathing space or as a helicopter pad.

The boat deck and sundeck- normally the places guests spend most of their outdoor time- have serious competition on this particular yacht, although of course they are beautifully done too, with elegant dining tables and plenty of sunbeds and cushions, with a Jacuzzi taking pride of place on the sundeck.

It is vital in yacht design to make the most of available space, and this is even more applicable in Galactica Star, where the low sleek superstructure and the huge outdoor entertaining areas meant that there is correspondingly less interior volume.

Mark Cavendish, Sales and Marketing Director at Heesen says of the smaller interior of Galactica Star ‘It’s the ocean-going equivalent of an Aston Martin rather than a Range Rover. You obviously can’t fit as much luggage in, but it looks much cooler.’

It certainly does, and this aesthetic triumph carries into the interior, created by design heavyweights Bannenberg & Rowell. The interior incorporates precious hardwoods like Macassar ebony and wenge, grey rippled sycamore and brushed spruce, with signature hourglass motifs and geometric designs built into furniture, floor and ceiling panels.

Standout features include the extraordinary elliptical staircase, which penetrates 4 stone floors over a drop of nearly 14 metres, and the simply beautiful combinations of marble in the master bathroom; white Carrara, mid-brown Gris De Santa, and a rich, dark brown Grecal stone. Utilising heavy stone impacts on the performance of the yacht, so Heesen’s master masons mustered all their skill to veneer the stone down to a few millimetres. The results are impressive, only adding to Heesen’s reputation as a leader in weight reduction techniques. 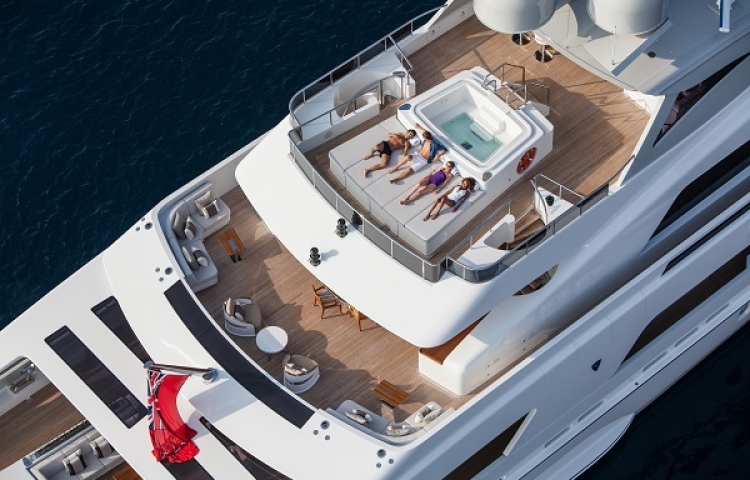 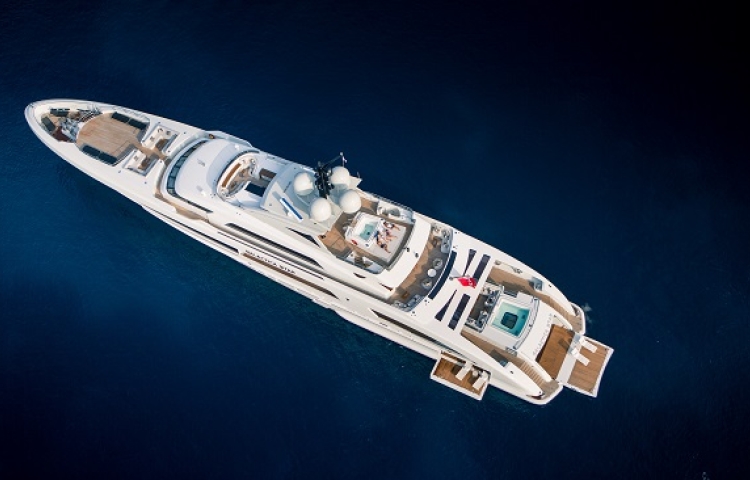 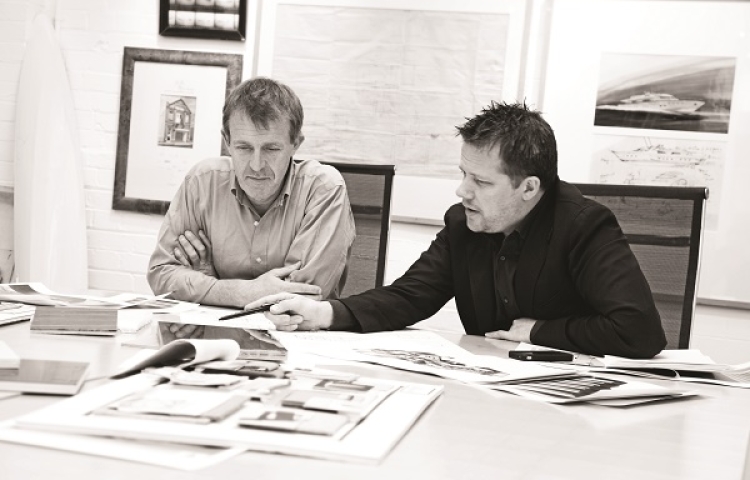 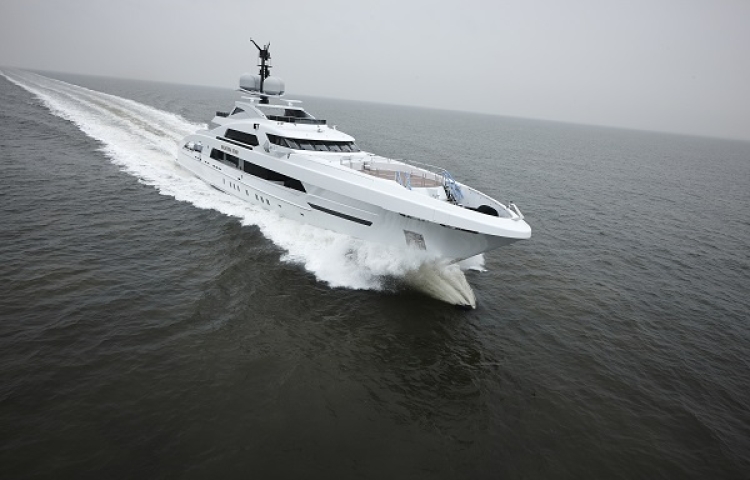 One challenge that Bannenberg and Rowell tackled in conserving space was how to avoid the common ‘dead space’ between the main salon and the dining room, where the room narrows to accommodate the ventilation ducts rising from the engine room below.

By creating a bar space with a fireplace area, Bannenberg & Rowell have made this space ‘somewhere for guests to stop and relax rather than just walk through on their way somewhere else’.

This is just one example of how each area on this yacht has been planned to the finest detail, and to maximise the available space for guest enjoyment.

However, this clever maximisation of guest space has come at a cost: Galactica Star only sleeps 13 crew: admittedly a low crew ratio for a yacht this size. This is not a criticism of the shipyard or designers, for as long as manning numbers comply with regulations, shipbuilders will build the yacht that the owner requests. In this case, the commissioning owner intended to run a quiet program with few guests, but when the owner changed, Captain Will Alpers had to come up with a clever strategy to make a busy program work with a smaller crew.

One vital step was to employ the right crew- experienced professionals that could carry a bit of extra weight - and work smarter, not necessarily harder.  This is a boat of clever systems, and efficient work plans- one that other, more heavily crewed yachts could probably learn a lot from.

Another obvious solution was to house a couple of crew on the chase boat, a 12 metre Torpedo that can accommodate up to five people.  There are some logistics involved in housing crew over two vessels of course- the chase boat has to remain ‘guest-ready’ and the passages, work schedules and berthing arrangements must be well-organised to ensure that crew are in the right place at the right time. But it is a viable solution to yachts with small crew-accommodations- raising the interesting question of whether more yachts in future will dedicate more space to guest areas and have support yachts for extra crew, as some already do for tenders and toys.

Regardless, I have no doubt that the crew are proud to work on Galactica Star. To work on a multi-award winning yacht that the whole industry is talking about is quite a lovely thing. And if it is one thing to work on it, it is another thing altogether to own it, so it’s safe to say the owner is probably quite chuffed with it too.

But of all those people involved in the Galactica Star story, the finest achievement of all, I think, is to have built it.

This yacht was Heesen’s greatest technical challenge, and it has succeeded in pushing yachting ever forward, ever more efficient, ever faster.  In a sector not widely known for innovation, this can only be a good thing. We look forward to what comes next.