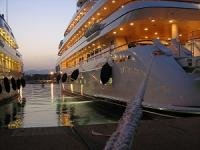 Threats at sea have been well documented, but dangers in port are equally, if not more common.  In this article, we ask if more could be done for the welfare of crew members, both on and off duty, and who is ultimately responsible for their wellbeing.  We also offer some tips from industry figures on how crew can stay safe when on dry land or travelling to and from the boat.

The Caribbean is traditionally seen as one of the more dangerous destinations for off-duty sailors.  In Jamaica and Antigua, for instance, it’s not unusual to hear of crew members being robbed, assaulted and even killed.  The Mediterranean may seem safer in comparison, but the yachting community has witnessed some brutal attacks in recent months.  Many will testify that muggings have long been an issue in Antibes’ backstreets and as OnboardOnline reports here, crew and residents of Antibes feel the situation is deteriorating. (Have your say on our survey.) So wherever you find yourself, it’s good to be prepared. Many feel that yachties are specifically targeted as easy prey; rich pickings for local opportunists, particularly the younger, less-streetwise crew in unfamiliar surroundings.  There is also a view that some bring trouble upon themselves, being rowdy and flash with their cash.  In certain ports, local authorities have been indifferent to victims’ woes, the view being that the yachties themselves are the real issue.

It’s easy to see how some might resent the yachting community, even when their presence greatly supports the local economy.  By nature, yachts are flashy things – status symbols, designed to draw attention.  And while crew are way down the scale when compared to their oligarch employers, they are often better off than the locals – at least in perception: where there are boats there is money, and often carelessness with that money.

It’s a scenario that most crew can probably relate to: a stressful, three-week charter with a demanding guest finally ends and the crew let off steam ashore.  Round follows round, spending their hard-earned winnings, before loudly staggering back to the boat.  Often it’s harmless enough, but they are putting themselves at greater risk.

Many might be well drilled on dangers at sea, but industry figures we spoke to found that typical crews are not as well informed as they could be in terms of safety ashore, despite its obvious importance.  Chris Stewart of Black Pearl Maritime Security notes, ‘They come hand in hand, protecting the ship and the crew is systematic. The after care of any crew member is the issue.’  One issue is that ‘there are so many others willing to work at sea’, a view shared by Michael Frodl of C-Level Maritime Risks: ‘Crews are seen as plentiful in supply.’

But whether on a private yacht or a tanker, crew need to remain clued up on potential hazards.  As Allmode International Security Services note, ‘Crew should be trained and briefed of the ever present dangers in certain countries; simple advice could save the lives of crew should they be unfortunate enough to get into a situation.’

Aside from time at berth, crew obviously have to travel a lot to various locations, often flying out to meet the boat.  This in itself has implications. As Steven Jones of SAMI highlights, ‘Assessing travel risk is of vital importance, as is managing identification and passports, keeping credit-cards and currency safe, supplying emergency information, managing emergency situations, and providing the safest possible accommodation.  Crews sent to join ships or office staff sent to visit them need to be aware of the precautions to adopt when travelling’.

Who is responsible for the crew’s welfare?

As a recent OnboardOnline article addressed, liability for employees whilst travelling (i.e. crew members) is currently a hot topic internationally in light of several high-profile air disasters.  Pressure is on employers to act as guardians, ensuring their staff’s welfare.

Jones stresses this importance: ‘It is vitally important that employers access the latest guidance possible... not only because of their duty of care, but because looking after your people is the right and professional thing to do. It is not enough to simply consider how things are meant to work out – there needs to be attention given to what can go wrong and how contingency plans can be managed and applied.’ Of course, resources like time and money always come in limited supply, and day-to-day tasks often take priority.  Frodl frankly sums up the reality: ‘Standards are for talk. Training for security takes time away from moving the ship along.’  Frodl adds that whether owners or shipping companies have a moral responsibility to protect their crews, this too has natural limits in practice.  ‘Owners are not nannies. Crews on leave can't be protected from themselves. They're grown-ups.’  Stewart agrees that, regardless of the guidance, information and drills available, ‘how seriously the crew takes that training is another question’.  So there is clearly a collective responsibility and all individuals must be accountable for their own actions. They owe it to their fellow crew to stay smart too.

Attending yet another course probably isn’t the most exciting thing to do in your precious downtime between trips.  However, many reputable providers offer courses to brush up on core safety skills and an increasing emphasis is being placed on time ashore.  Allmode Intelligence Services, for example, offer a crew-safe package, which specifically covers this. Bluewater Yachting provide a wide range of courses including ‘Personal Safety and Social Responsibility’, covering everything from employment rights and sexual harassment to responses to emergencies. MedAire, the international SOS company offer a complete medical service to members as well as advice, training and services relating to crew safety and safety while travelling. And there are plenty others, many offering services tailored to your specific needs. If you feel it will be beneficial, ask your captain or employer if you can attend.  Having a well-informed and streetwise crew will make their lives easier too.

As Allmode note, ‘effective training and use of a little trained knowledge and common sense should protect the majority.’ Now for the common sense. We don’t want to suggest that everywhere you go, you’re in imminent danger. But as the saying goes, fail to prepare and prepare to fail.

So with thanks to all the experts’ and their advice, we’ve compiled a list of best practices to follow.  It might be stating the obvious or even sound patronising, but building these practices into your daily routine could save your life. At the very least it may save you a load of time waiting around in some dingy embassy building in the middle of nowhere, filling out countless forms. (Your fellow crew members will also thank you for this).

So, whenever possible in port, always: SAMI have added the following, in relation to travelling:

Of course, it’s not just the inexperienced or drunk who get mugged.  Even seasoned veterans and the physically-imposing can get jumped in broad daylight.  But staying smart and being respectful of the local communities can help to minimise the risk and arm you with the best response if the situation arises.

For more information on crew safety courses, check out the links below: