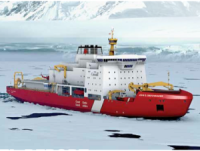 The ship is to be built by Seaspan Vancouver Shipyards as part of the Canadian government’s National Shipbuilding Procurement Strategy (NSPS) and will replace the Canadian Coast Guard (CCG) heavy icebreaker Louis S. St-Laurent.

As one of the largest and most powerful icebreakers in the world, John G.Diefenbaker will substantially expand the CCG’s operational frontier, and is key to the ongoing protection of Canadian sovereign interests in the Arctic. The new polar icebreaker will be an iconic symbol of Canada’s presence in the Canadian Arctic while providing support to a variety of government departments and agencies as well as to the shipping industry.

Vard Marine Inc., under contract with the government of Canada, developed a new design for John G. Diefenbaker in collaboration with the CCG, Aker Arctic Technology (AARC), and Imtech Marine Canada. Other design contributors include Curtiss-Wright/INDAL Technologies, Noise Control Engineering, and SNC-Lavalin. The National Research Council Canada (NRC) provided environmental data and analyses for the definition of the arctic conditions in which the ship will operate, as well as the expertise and facilities for the physical model testing.

John G. Diefenbaker is one of the first heavy icebreakers to be designed using the International Association of Classification Societies (IACS) polar class rules.

The ship is designed according to the requirements of Lloyd’s Register of Shipping, polar class 2, the second highest ice class according to the IACS polar class rules. Furthermore, the class notation “Icebreaker+” was selected based on an analysis of the vessel’s operational profile and potential ice loading scenarios. The structural arrangement has been analyzed extensively using finite element analysis to confirm that it can withstand the expected ice loads.

The vessel is designed for unrestricted autonomous operation in the Canadian Arctic and adjacent waters for nine months of the year, and with the capability of safely over-wintering in high arctic waters.

In order to carry out this mission, it was determined that the ship should be capable of breaking 2.5 m of snow-covered ice and have an icebreaking endurance greater than 25 days. The ship also has an open water range of 26,200 nautical miles and a logistical endurance of 270 days. To achieve these requirements in a cost effective manner, an extensive hull form development and model test program were carried out. A series of hull form alternatives and propulsion system options were considered for the design. The hull form was developed based on other proven designs for heavy Arctic icebreakers.

The hull form of John G. Diefenbaker may be described as a combination of a modern icebreaking bow, a knuckle sided mid-body, a round bilge, and a tapered stern with transom. Two propulsion alternatives and two mid-body shapes were considered during the preliminary design.

Physical model testing formed an integral part of the design process, and an extensive model test program was carried out to evaluate the icebreaking and open water performance for the different hull form and propulsion options.

The main test program was carried out at the NRC model test facility, the Ocean, Coastal and River Engineering Institute, with additional ice tests carried out at the AARC ice test basin. The test programs included resistance, propulsion, and manoeuvring tests in both ice and open water; ice ridge penetration tests; and wake survey, seakeeping, and station keeping tests in open water.

The model test program revealed significant advantages in manoeuvring and resistance in ice for the knuckle side over the sloped side alternative, as well as major advantages in manoeuvrability in ice and open water for the propulsion arrangement with the centreline pod. The model tests also led to the refinement of hull lines in the stern region to improve astern icebreaking performance. John G. Diefenbaker is to be fitted with a fully integrated diesel electric propulsion system consisting of six diesel gensets in two engine rooms, with an installed power of 39.6 MW. The generating plant will supply all the ship’s electrical needs, including the two 11 MW wing shafts and the 12 MW azimuth thruster. The combined propulsion power of 34 MW makes John G. Diefenbaker one of the most powerful diesel-electric icebreakers in the world.

In addition to superior icebreaking performance, the ship is designed to automatically maintain position in sea state 5 and surface currents of up to 3 knots in open water.

To accomplish this, the ship is to be fitted with an automatic dynamic positioning system designed to meet DP (AM) standards, and two large bow tunnel thrusters of 1.9 MW each. Other notable auxiliary systems include a combined roll stabilization and active heeling system, and an air bubbling system in the bow to mid-body region to provide hull lubrication and ice friction reduction during icebreaking.

The ship also has been designed to minimize noise and vibration, and is designed to have a crew accommodation comfort (CAC) certificate of compliance of CAC3.

Although the primary mission for John G. Diefenbaker is icebreaking, the ship is designed to be a versatile platform with the ability to accommodate and support a wide variety of missions and mission activities. The ship was therefore designed with a range of multi-purpose spaces and reconfigurable systems and equipment using a modular mission payload design philosophy.

Various types of securing fittings are provided in each of the cargo and program stowage spaces. These fittings increase the flexibility of the spaces so that they can accommodate a wide array of cargo items and program packages.

Mission support includes an extensive array of hull-mounted sensors such as multibeam sonars, echo sounders, current profiler, sound velocimeter, and sub-bottom profiler. Lifting appliances include six cranes for loading and unloading of cargo or stores, and to launch and recover boats and program packages. An elevator and cargo service lift are provided for vertical distribution of cargo and personnel.

The ship has seven specialized winches that are capable of handling a wide array of program packages, and three dedicated control rooms for overseeing program missions.

The aft working deck and the ocean sampling room, with its moonpool and moonpool deployment system, are the primary program package deployment areas. A wide array of research equipment, including sensors, nets, cameras, corers, buoys, CTD rosette, and sonars, can be deployed either over the side or through the moonpool. The majority of program spaces are located in the aft/midship region of the 01 deck and are close to the vessel’s center of rotation. This places them as close as possible to the aft working deck and coring area so that program personnel can easily transition between the exterior and interior working spaces necessary for their mission.

A full-breadth vehicle garage is located aft on the main deck, providing an area to safely store and maintain a variety of vehicles and equipment, while enabling the equipment to be deployed onto the ice surface using fold-down ramps on either side of the vessel. The ramps are integrated into the side shell of the vessel and serve as watertight doors when closed.

The ship has the capability to stow, deploy, and recover a wide array of boats and small craft, such as the fast rescue craft, life/rescue boats, a pollution response vessel, motorized landing craft, an airboat, a workboat RHIB, hydrographic survey launches, and dumb barges.

Some of these boats have designated stowage positions and dedicated launching appliances, while others can be stowed in various locations and handled with several different lifting appliances, depending on mission requirements.

John G. Diefenbaker also is equipped with a towing system that enables it to tow a similarly sized vessel in both open water and ice. The system consists of four main components: the towing line, the towing winch, a set of towing pins, and towing communications and control stations. Organic aviation capability on the ship incorporates facilities and services for two medium lift helicopters for deployments of up to 270 days.

The helicopter facilities also have been designed for the capability to land and refuel large helicopters operated by the RCAF and other organizations. Safe operational envelopes for helicopter operations, both in-flight and on-deck, have been developed through extensive numerical analyses, including computational fluid dynamics studies, for air turbulence and exhaust gases over the flight deck, ship motions in waves, and the ship/helicopter dynamic interface.

For additional safety and crew comfort, the vessel has been designed with a flight deck control room (FDCR) that provides a direct view of the flight deck and helicopter approach and departure paths, and from which the flight deck officer can control all flight deck landing aids and flight deck firefighting equipment.

Landing aids also are to be night vision goggle friendly. The flight deck is located on the aft portion of 03 deck and has a landing area designed to accommodate the heavy-lift helicopter. The new Canadian polar icebreaker is a major national project and a significant part of Canada’s NSPS. The contract design of the ship is complete and ready for detailed design and construction. Once built, the vessel will be a valuable and highly capable asset in Canada’s icebreaking fleet. MT