Industry » Features » Barcelona Rising: The Superyacht Hub of the Future?
« BACK

Barcelona Rising: The Superyacht Hub of the Future? 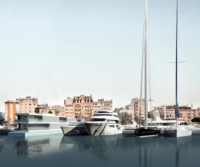 We stood in the hull-shaped boardroom and looked over the empty port. Marina Port Vell, Barcelona, and not a boat to be seen.  Had economic woes finally struck the Spanish yachting industry a death blow?

Quite the opposite in fact: the yachts had been asked to vacate so that the final stage of redevelopment could begin, one which stands to transform Port Vell into an extremely attractive proposition for owners, guests and crew. Significant investment has gone into buiding a modern infrastructure with seven-star services and, once completed, Marina Port Vell will boast 167 fully serviced berths for power and sail yachts and superyachts of up to 180 metres.

Next door at MB92, the cranes are also busy. The shipyard, operating at full capacity, is now undertaking a massive expansion to the existing facility to increase capacity and cater for the growing number of larger yachts. Earlier this year MB92 also announced a collaboration with the Nautical Academy, a full service training facility based on site. Pepe García-Aubert, Managing Director of MB92 comments, "This collaboration will enable us to provide our clients with yet another valuable service while the yachts are in our facilities or in the Barcelona area."

The Nautical Academy brings together some big names: The Warsash Superyacht Academy, Interior Yacht Services, Med-Aire, Blanchard International, and Sovren House, a state of the art culinary school, with courses accreditated by the MCA, RYA, PYA and PADI.

These three developments, along with 30 associated yachting companies, make up the Barcelona Nautical Cluster, a collaboration between a modern marina, a world-class shipyard and a full service crew training facility. All this is taking place along prime waterfront in one of the most vibrant and exciting cities in Europe, full of history,  architecture, art, excellent cuisine, and designer shops. It's no wonder then, Barcelona, as a yacht hub, is rising. Will it soon challenge Antibes as a place not only to base a yacht, but also to launch a yachting career? Will yachting hopefuls soon fly to Barcelona, rather than the South of France, or Palma?

Mediterranean crew tend to be either Antibes people or Palma people.  In the next few years, I expect there’ll be a growing tide of Barcelona people too.

The conditions for Barcelona’s success as a superyacht base are promising:  Earlier this year, the Spanish government relaxed the 12% matriculation tax on charter yachts over 8 metres, a tax which had previously deterred many yachts from chartering or taking a home port in Spain. Not only is this tax decision favourable for the future success of the Nautical Cluster,  it will also be good for greater Barcelona, with a predicted 650 million euros of income for the city and 400 new jobs.  In a country in severe economic crisis, the yachting dollar counts.

This landmark tax decision is pivotal, allowing Barcelona to develop as a homeport, a destination in its own right as well as a stop-off to the Balearics.

So, how does it stack up against an established super-port like Antibes?

If you were a yacht owner or captain making the decision where to base, repair or winter your yacht, what factors must come into play?

MB92, so named after the Barcelona Olympics of 1992, already has an impressive array of facilities and services, and provides refit, repair and maintenance works to more than 90 superyachts a year.

But you ain’t seen nothing yet.  According to the MB92 corporate dossier, the expansion of MB92 into the neighbouring wharf area will provide a 4000 ton Syncrolift, five hard standing berths for boats up to 105m, dry dock for boats up to 210 m, and a repair basin of 17 400m2, with a capacity for four boats up to 210m LOA. Photo: A computer generated image of MB92's expansion. For a video simulation of the project, click here.

Antibes shipyard, despite its recent acquisition by industry heavyweight Monaco Marine, simply doesn’t have the space or facilities to compete with the scale of MB92. Antibes, for the sake of comparison, is 8000 m, has a 200t and 80t travelift, cranes up to 100t and 6 working berths for yachts up to 35m. There are other shipyards along the Cote D’Azur, certainly, but we are comparing specific ports, not regions.

For crew berthed in Port Vell there will be a lounge, coffee shop, pool area and terrace.  Barcelona beach, voted the world's best city beacht, fronts the port. As a home port or a port of call, with such a fantastic location in the heart of Barcelona, crew couldn’t ask for much more.

It’s not all about crew, of course. Marina Port Vell has been designed with a keen eye for the comfort and desirability of yacht owners and their guests.  The 150 berth port will accomodate yachts up to 180m in marina with 6-star facilities including spa treatment rooms and a gym, as well as a private members club for yacht owners, called the Villa.  This is catering to the growing trend in Barcelona for private clubs:  Soho House is opening a new establishment only streets away, and the CEO, Nick Jones, has already bought a berth in Port Vell.

Without question, the location of this marina is key.  As Martin Bellamy, CEO of the Salamanca Group that owns Port Vell describes, ‘Almost uniquely, owners can situate their vessels right in the heart of the city. It’s like having a superyacht marina next to the Houses of Parliament in London, it’s that central.’ In comparison, the Port of Antibes has more berths.  But not a cafe, let alone a private member’s club. The town of Antibes is charming and full of restaurants and bars, but the port itself has nothing to attract yacht guests.  This lack has been noted by a concerned Antibes yachting community, who have banded together with local council to agitate and plan for a vast redevelopment of Antibes port. Their effort is both commendable and vital for the economic future of Antibes. The group is called ASAP, which is fitting, because the work at Barcelona is entering its final stages while the Antibes redevelopment is still in the planning stage. As for wintering in Antibes, it is wonderful for skiing, but crew often complain of the feeling that tumbleweeds might at any minute sweep through the narrow cobbled lanes, and there is a distinct lack of nightlife.  Where Barcelona has cocktail bars, stadiums and nightclubs, Antibes has... L’Eqinox.

To my mind, one of the most crucial drawcards of the Barcelona collaboration is that the Nautical Academy offers crew training on-site across all departments, offering Master and Y4 through to barista training- and has a culinary school within the complex.  As the Academy explains, ‘Situated inside MB92 shipyard, NA is the only academy in the world operating from within a superyacht shipyard where crew can be given the unique opportunity to undertake training during the yacht’s downtime/refit period.’

This is also a very attractive proposition for the yachts based in next-door Port Vell. Given the availability and proximity of courses, many crew will enrol in short courses and increase their skills, where otherwise they may not.  Having a training school in the complex is also a cost-effective solution for crew who can continue living onboard and don’t have to add accommodation and flight costs to course costs.

Antibes has established training facilities with an excellent reputation- the most well-known being Bluewater. Antibes has proven experience in large-scale superyacht training with a wide variety of providers, as well as crew houses, networking opportunities and supporting businesses.  The Nautical Academy will have to work hard to match the training offered in Antibes, but its facilities and well-conceived partnership with Warsash is a very promising beginning.

There are plenty of things for crew to do in Barcelona.  Barcelona is also far more affordable than Antibes, and taxis are cheap and plentiful.  I love Antibes, but it’s not cheap and taxis are expensive- and practically mythical.

Just watch your wallet - a serious drawback to Barcelona is how many thieves operate there. A friend of mine reported that almost all of her 10+ strong crew had been pickpocketed (or an attempt made) in the two months they have been based in Barcelona.

BUT WHAT ABOUT PALMA?

No article about the virtues of Barcelona could be attempted without considering Palma.  Many of the advantages described for Barcelona also apply to Palma - the new tax ruling, the affordability, the quality of its major shipyards, but it's safe to assume that as Barcelona grows in stature and its yachting community grows, it will increasingly put pressure on Palma. One important thing to consider is that Barcelona doesn’t have Magaluf, and there are less Germans wearing socks with sandals.

SO WHAT DOESN'T BARCELONA HAVE?

At this stage, Barcelona only has a small amount of supporting infrastructure to the yachting industry.  While the Nautical Cluster itself provides a wide range of services and facilities, Barcelona is a far cry from Antibes or Palma, both highly dependent on the yachting industry.  Walking through the streets of Barcelona near the port, there is not the feel of Antibes, with its bustling crew bars and crew houses and swarms of yacht crew. (Although some may see that lack as a positive). The vast range of yachting businesses is absent: you can find almost everything you need, but without the range of competition.  Crew agencies exist, but the big international ones are missing, and the local ones often partner with cruise ship recruitment.

My feeling is that things will soon change.  With the opening of the Nautical Academy, more candidates will consider Barcelona as  somewhere to train and launch their career.  With the expansion of Port Vell and MB92, more captains and owners will elect to take the yacht to Barcelona. Where there are boats and a training school, crew will come seeking work.  Before long, international crew agents will open offices, which will spawn crew houses and bars and a yachting community as large and vibrant as that of Antibes.  Captains will no longer have to fly candidates out from Antibes or Palma for interviews, and will start considering Barcelona as a place to find crew, find dayworkers, and to train existing crew.

This is only a prediction, and it may not pan out exactly in this way. Yacht owners aren’t going to stop cruising the Cote D’Azur any time soon, and Antibes and Palma are ingrained in the industry as the Mediterranean ports for job-seeking and end of season-reunions. We often return to where we started.

But the conditions for success are in place to see Barcelona rivalling and perhaps surpassing Antibes within the decade as a superyacht mecca.  Where you have a shipyard, an attractive port, facilities, services, favourable taxation and an exciting location - the boats will come. And where the boats go, the crew, crew agents and the wider yachting industry follows.  The collaboration taking place in Barcelona is a force to be reckoned with.  As for Antibes, ASAP had best get onto it asap.

*Barcelona photos courtesy of Moyan Brennan and Olli A  via Flickr, under a Creative Commons license.