Dealing With Environmental Activism at Sea 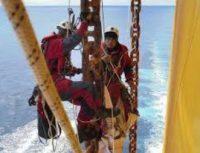 On the 6th April 2015, activists from the environmental pressure group, Greenpeace, scaled and boarded the drilling platform, Polar Pioneer.

She is currently being transported across the Pacific Ocean from Malaysia to Seattle, where she will be based during an upcoming drilling campaign in Alaskan arctic waters. Dockwise’s heavy lift vessel, the Blue Marlin is conducting the transportation.

The Polar Pioneer is owned and operated by Transocean, under contract to Shell. The boarding took place some 750 miles NW of Hawaii. This is the latest in a string of high profile boardings and attempted boardings conducted by Greenpeace directed against drilling platforms and companies linked to Arctic and Antarctic drilling.

Greenpeace is a large organisation with 2,400 permanent staff and around 15,000 active volunteers. They have a fleet of up to three “mothership” style vessels and numerous small and fast-craft at their disposal.

Their motive for taking action in this instance is to prevent drilling for hydrocarbons in Arctic waters, for which they cite safety issues, immediate spill/pollution dangers and concerns over the downstream impact and climate change.

Ever since the mid-nineties, when the activists from Greenpeace brought worldwide attention to the practices of the oil and gas industry, by the boarding of the Brent Spar oil storage buoy, the industry has tried to change its procedures and plan for incidents which may bring the industry unwanted attention or reputational damage. Some examples of these are the Russian energy giants Gazprom rig, the Prirazlomnaya, which was boarded by six Greenpeace activists in August 2012.

The activists spent several hours hanging off the side of the Prirazlomnaya platform in the Pechora Sea attached to the rig's mooring lines. They had prepared for a long occupation by bringing up supplies, including the tents, but evacuated after rig workers threw pieces of metal at them, after they had earlier been blasted with water cannons.

However, they had the time to send tweets and hang a banner saying, ‘Don’t kill the Arctic’. The reaction of the crew could be seen in a bad light by the consumer, as they were peaceful protestors.

Similarly, a year earlier, the Danish owned drilling platform, the Leiv Eiriksson, operated by Cairn Energy off the Greenland Coast, was boarded by around eighteen Greenpeace activists, demanding the release of their oil spill response document.

Three of the activists remained on the platform, hung from the underside of the rig in an Arctic survival pod, with enough supplies to last them for 10 days. However, the activists were arrested by the Danish police and issued with substantial fines for breaching security and carrying out protests on the platform.

Nevertheless, the protest of the activists did succeed in making Cairn Energy release their oil spill plan in August, thereby yet again gaining credibility for upholding environmental rights.

More recently, worldwide attention was captured with the arrest of 30 Greenpeace activists in September 2013, who were detained by 20 armed Russian Navy Commandos from their vessel, the Arctic Sunrise and held for more than two months in Russian jails, accused of piracy and later hooliganism. Russian treatment of the activists was condemned by the media, but the incident again gained much publicity and highlighted the increasing push into the Arctic.

In May 2014, some members of the same group, called the ‘Arctic 30’ along with numerous other activists, performed a spectacular protest to publicise the first shipment of Arctic oil to the port of Rotterdam, using a Russian tanker. The 44 activists used paragliders, climbers, a fleet of boats and inflatables to block the path of the tanker and attempt to prevent it from offloading the cargo.

The activists were arrested by the Dutch armed anti-terror police, but were later released without charge.

The activists are calling for an end to offshore Arctic oil drilling both in Russia and elsewhere in the world. The environmental group has heavily criticised international companies like Shell, BP and Statoil for their global Arctic ambitions as well as their joint ventures with Russian energy firms and are now targeting American interests in the search for Arctic oil. (Polar Pioneer April 2015). In light of the need to explore and develop Arctic drilling, the need to reassure the consumers that this is a highly regulated and strictly controlled industry has never been more important.

The right approach needs to be taken to the inevitability that activists are going to try to discredit the practice of Arctic drilling and attempt to board and protest on both rigs and the vessels that transport the cargo.

It is therefore essential that all involved in the industry, from the grass roots level up, know the costs of getting things wrong. To consider the reaction of the Spanish naval approach recently (November 2014) when a group of activists entered the exclusion zone (1 nm) around the oil ship Rowan Renaissance, working for the Spanish energy company Repsol.

The activists approached the ship in their RHIB (rigid hull inflatable boat). They were asked to leave the area or face the consequences from the naval patrol vessel Relámpag, who deployed their own team in RHIBs.

Subsequently, the activists were rammed by the naval RHIBs in a dramatically filmed incident. One of the activists sustained a broken leg, whilst another suffered cuts to her leg from the propellers.

The fallout of such incidents can be harmful and the public will always take sides, usually against the perceived aggressors, in this case the Spanish Navy. The negative publicity will then be attributed to the oil and gas industry.

It is therefore essential that all companies are trained and prepared to address the issues raised by activist action, that of health and safety issues, media attention, insurance, reputational damage and conflict management.

As can be seen in the below video, the boarding is achieved from small ships, launched and supported from an ocean going mothership, the MV Esperanza, formerly the Vikir-4 a 2076GT Soviet Navy Ice-class fire-fighting vessel. Upon approaching the vessel, the activists seek to scale the freeboard with sophisticated climbing equipment (Many Greenpeace activists, including the leading boarder in this operation are professional or “extreme sports” climbers.)

In order to do so, the activists will identify a route using pre-existing rig structures such as grappling points to facilitate their ascent (in this case the underside rail of one pontoon and an anchor). The activists are reliant of the physical structure of the rig to allow them to board – some rigs being easier to board than others due to their design (note the sheer hull of Gazprom's Prirazlomnaya rig in Video 3 & 4 in the full report linked below).

The videos below demonstrate the ingenuity, skill and determination of such activists to scale seemingly inaccessible structures.

Upon boarding, the activists will identify a sheltered (but inaccessible) space in which to stow themselves, lifting extra personnel and supplies from the small craft in order to prolong their protest. (Video 2) Video 2: Activists can be seen embarking further personnel, and using climbing equipment to load supplies for a protracted demonstration

Although Greenpeace (along with other environmental action groups) are committed to the pursuit and implementation of peaceful protest, their activities can still be highly damaging and sometimes potentially dangerous.

Their man impact is financial, but there is a high possibility of severe reputational damage if not dealt with correctly. They are legally and politically sophisticated, with a professional and dogged media and PR campaign.

It is likely that they will be able to spin any situation, occurrence, incident or comment (real or perceived) to their advantage.