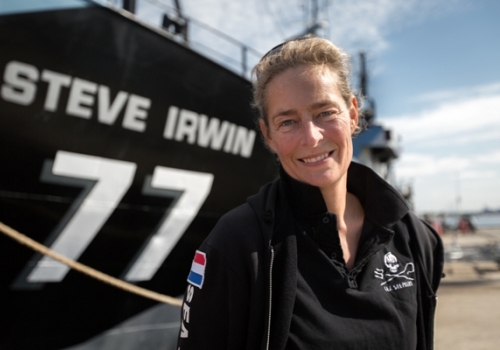 You might think that working as a yacht skipper and diving instructor in the beautiful waters surrounding the Great Barrier Reef sounds like the dream job. Idyllic though it was, however, it wasn’t quite enough for Wyanda Lublink.

Her passion for the environment and wildlife conservation led her to volunteer as a wildlife carer in the Australian bush before joining Sea Shepherd Global and working her way through the ranks to Captain of the M/Y Steve Irwin, one of five vessels which play a key role in the fight to save the endangered whale population of the Southern Ocean.

OnboardOnline caught up with Dutch-born Wyanda, who now lives in Agnes Water, Queensland, just a few weeks after her return from Sea Shepherd’s recent Operation Nemesis in Antarctica. Despite the frustration and hardship of this latest mission, she was in good spirits and keen to share the story of her amazing career path.

Wyanda’s naval background coupled with a strong desire to protect indigenous wildlife made her the ideal candidate for a position with Sea Shepherd Global. ‘I worked for the Royal Dutch Navy for 10 years, which I really enjoyed,’ she says. ‘I wanted to try and live in Australia and joining the Australian Navy was the only way of me doing that. I spent two years with them before leaving to work as a skipper and diving instructor in Australia. ‘Somehow it wasn’t quite fulfilling enough so I quit and volunteered as a wildlife carer for a week in the bush. I loved it so much, I ended up staying for three years! We rescued anything that was Australian native, nursing injured animals, putting them through rehabilitation and then releasing them back into the wild.

‘I was involved in many rescues of injured kangaroos, moving them off the road with broken legs and taking them to the vets to be put down but it was heart-breaking work and I missed the ocean. I got in contact with Sea Shepherd, filled out an application form online and luckily, because of my nautical experience, I was accepted a few months later.’

Wyanda joined as a first mate in 2013 and the following year was made Captain of M/Y Brigitte Bardot before being made Captain of M/Y Steve Irwin. ‘Steve wanted to join one of our Antarctica campaigns but sadly he died before he was able to come with us so in his honour, we named the ship after him. His dad Bob Irwin would come to the ships at the southern ocean base in Melbourne to wish us good luck before departure.’

Wyanda’s first campaign was Operation Relentless in 2013 in Antarctica, during which around 800 whales were saved thanks to intervention by the ship she was on, the M/Y Sam Simon. ‘I came on as third mate and within three days, I was made first mate, which was quite a step up!’ she recalls.

While passionate about her work with Sea Shepherd, Wyanda reveals that periods of up to three months at sea – the Steve spent 83 days in the Southern Ocean during Operation Nemesis – can be hard on the mainly volunteer crew. ‘We are all here for one reason, which is to save whales, but it’s a really long time and people do get down, frustrated and annoyed at times. We had 36 crew onboard, including Americans, Canadians, French, Dutch, Germans, British and Australians, and we pick each other up. Now and then, it’s important to take the time to do something fun so we will jump into the ocean and go snorkelling or do a small boat tour around an iceberg. It can’t all be dour stuff.

‘Of course, people argue and have trouble working together sometimes but in general, there is a very good atmosphere. Once, I had to cut our heating system to save fuel. If I did something like that in the navy, there would have been a mutiny for sure, can you imagine? But here they just put on an extra jumper and deal with it. I love that attitude.’

As Sea Shepherd relies solely on donations and goodwill for funding, the few salaries that are paid are far lower than average within the shipping industry.

‘I’ve been doing this for four years and if I worked commercially I could earn more than I earn with Sea Shepherd but money is not my driving force,’ adds Wyanda. ‘A lot of people come in and join us for one campaign while others hang around for a few years and work their way up.

‘We have a policy of not keeping people on the same ship for too long, we have a healthy crew rotation and we try to prevent burnout by enforcing a break after a long mission. During Operation Nemesis, we didn’t have massive confrontations with the Japanese whaling fleet but the burden is still heavy and you need a break.’ I ask Wyanda which nations in her opinion are the worst for flouting the international marine laws and she doesn’t hesitate. ‘Countries like Japan and China don’t have the same passion for animals as we do. You hear of terrible cases of severe animal cruelty in places like China, where they sell little turtles trapped in key-rings.

‘More surprisingly, Spain is also heavily involved in IUU (illegal, unreported and unregulated) fishing; I only learned after Operation Icefish that many of the vessels get their money from Spain.’

Naturally, keeping upbeat is not always easy and Wyanda is still disturbed by the memories of Operation Sleppid Grindini (which means set the whale free) two years ago in the Faroe Islands. ‘We were supposed to have our biggest presence ever,’ she recalls. ‘I was on the Brigitte Bardot and Sam Simon and Bob Barker were also supposed to be there but they didn’t manage three months there. I saw a lot of pilot whales being killed. I could only deal with it once I was off the ship and back home.’

When she isn’t in the middle of a mission, Wyanda works casually as a skipper and diving instructor near her home. ‘I need to relax and empty my head after long campaigns,’ she admits. ‘I have a dog and I live on the beach. That gives me balance.’

So how can people help Sea Shepherd continue protecting our marine wildlife? ‘The biggest help is money but people can also help by volunteering on shore or on the ship and they can also donate to the ship’s online wish list and help us spread the word.’