Crew Life » Crew Departments » Galley » Where Does All the Food Go?
« BACK

Where Does All the Food Go?

Every time I prepare for a charter, I wonder if I’ve bought too much food. Space is always a premium on yachts, but you need to have everything a guest might ask for.

I've had to call five provisioners for passion fruit juice on a Sunday- and, by the way, did we have any mini salami sticks for the seven- month old baby?

We had a three week charter coming up, and I had three shopping carts from Carrefour, plus a shopping caddy each of meat, seafood and chicken. (I need a caddy of chicken just to feed our deckhand who eats for three). Also four boxes of ice cream and five pallets of produce.

My eyes glazed over the sea of dried goods and delicate raspberries spoiling in the sun. I had a headache. I had to lie down. Where was I going to put it all?

Pasta went under the sofa; eggs and potatoes with the pots and pans. Everything was out of sight, but I was afraid to open a cupboard and have five kilos of broccoli fall on me. There was a bag of lobsters hiding behind the trash can.

Our trip to Corsica got off to a rocky start; the guests asked if they could drop off their luggage and wine the night before, which seemed ok- except that we needed to meet them at an Italian port about an hour away. An engineer was still working on the boat and we ended up bringing him with us as we set sail. We met the agent and the family on the quay, along with twenty boxes of wine. Five types of rosé as well as tons of juice and soft drinks. Not to mention that we had already ordered a huge amount of beverages.

Our stewardess joked if we died at sea, it wouldn’t be of thirst.

After the guests left, we hit the remote for the gangway. We heard a nasty clanging sound – the belt had snapped. After hours of trying to fix it ourselves, we were in trouble; if a solution wasn't found our charter would be cancelled.

At midnight, the captain called his Italian mechanic and two men came on the boat at 8am the next morning. The guests were not supposed to arrive until 10am; but instead they showed up at 9am with more food and no way to get on the boat.

Luckily at the last minute the gangway was fixed, and everyone came on board.

One woman, who was slightly heavier, gave me a container of protein powder and shaker for her diet. Everyone is on a diet.  No one ever says upon boarding "I want cheeseburgers and macaroni and cheese". However,  despite their pre-occupation with diets, people will still want to eat well. So I start with fish and vegetables on the first day and end with steak and chocolate lava cake at the end.

Everyone cleared their plates at each meal. Does this mean I should be giving them more food? I may need a bigger fridge! 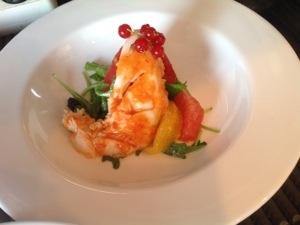 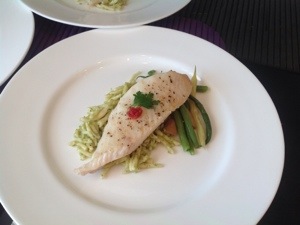 Chef Ivy Dai trained in France and at the Cordon Bleu College of Culinary Arts in Los Angeles. Dai appeared on Food Network's “Cupcake Wars," and is also the founder of Dragon Dinners, cooking classes for home cooks.

The California native found her passion for cooking at the age of 12, when she took a home economics class and began baking for friends and family.

She worked for the Four Seasons and Ritz Carlton hotels in LA, and was cooking and teaching in Paris before falling into yachting.

Before cheffing, she was a producer at ABC News and a full-time food writer. She enjoys bringing an Asian flair to Mediterranean cuisine. For more Med-inspired recipes, visit her blog at: ivyeats.com