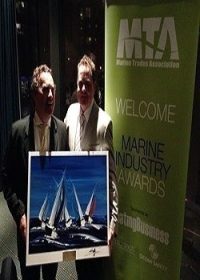 The Oscars of the ocean have been awarded to companies large and small at the  London Boat Show. The Marine Trades Association/Boating Business Awards,  recognise excellence in individuals and companies working in the UK marine  industry.

Panels from Boating Business and the Marine Trades Association  consider the nominations for the annual awards, which were presented in front of  a packed audience of industry professionals at the Crowne Plaza Hotel in  London's Docklands. The awards are sponsored by Boating Business, Matchtech and  Ocean Safety.

The MTA award for Retailer of the Year went to Jimmy Green  Marine Ltd, a family company based in Beer in East Devon, who has been a mail  order chandler since 1981. Andrew Ash-Vie of Harken UK Ltd picked up the MTA  Personality of the Year award. Andrew is a well-known figure in the industry and  has been Managing Director of Harken UK Ltd for the past 14 years. The coveted Boating Business Lifetime Achievement  Award, which was presented to Alan Morgan. Alan successfully ran Alan Morgan  Yachting for 34 years, subsequently serving as Chairman of National Boat Shows  for the period 2006-2008 and president of the British Marine Federation from  2010 to 2012.

The evening's final award, the Chairman's Special Award,  was presented to Will Blagdon (Blagdons Boatyard and Chairman of BMF south  west).

MTA Chairman, Riki Hooker, said: "It is fantastic that these  awards allow us to acknowledge publicly the work done by these individuals and  companies. It's encouraging that in spite of a challenging business environment,  our industry continues to offer examples of those whose success can inspire  others".

Nominations for next year's awards will open in autumn  2014.
Read more at http://www.yachtingmonthly.com/news/535869/ocean-oscars-awarded-at-boat-show#KVV2eRf2pQowgFlz.99