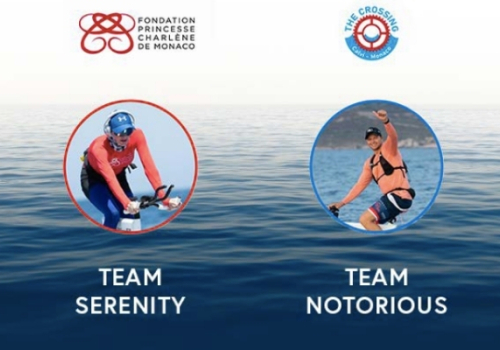 Yachting Partners International (YPI), a bespoke luxury yachting company, has today announced its sponsorship of ‘The Crossing – Calvi to Monaco Water Bike Challenge’. Two teams of four internationally renowned athletes will race on water bikes from Calvi in Corsica to Monaco, to raise awareness of the Princess Charlene of Monaco Foundation and its hugely worthwhile programmes.

The race, which will start on September 12 2020, is both unique and a huge challenge. Competitors including Conor McGregor, Garrett Wittstock, and Princess Charlene herself will take it in turns at sea for nearly 24 hours over a distance of 180 km. The two teams, named Serenity and Notorious, are scheduled to arrive at the Yacht Club de Monaco on September 13 2020.

As well as being a spectacle for people to watch and a celebration of the values of sport cherished by H.S.H. Princess Charlene, the purpose of the challenge is to draw attention to the Foundation’s valuable work around the world. The Learn to swim, for learning to swim and Water Safety, for the prevention of drowning programs are aimed at disadvantaged children and those at risk of drowning because of their environment. Since the creation of the Foundation in 2012, more than 730,000 people have benefited from its programmes across 34 countries. This race will continue to raise awareness and drive support for the Foundation.

Abdullah Nahar, Director at YPI, said: “YPI is proud to be sponsoring the Water Bike Challenge. Our business is based in Monaco, so The Princess Charlene of Monaco Foundation is close to our hearts. The race promises to be exciting to watch and we have no doubt that the efforts of the competitors will help draw attention to the Foundation’s invaluable work. We look forward to seeing which team wins!”