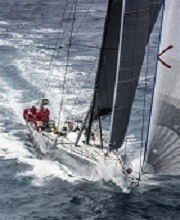 The 50-foot yacht Victoire was Monday named the overall winner of the Sydney to Hobart ocean race, after the only boat still at sea that could beat her ran out of time.
Supermaxi Wild Oats XI won line honours in the challenging 628 nautical mile race on Saturday night, storming home ahead of the fleet in a time of two days, six hours, seven minutes and 27 seconds.
But the Cruising Yacht Club of Australia said Monday that Victoire had taken out handicap honours, which take into account the size, weight and length of each boat and the time they took to complete the gruelling race.
"It's an amazing achievement," said Victoire's owner, Sydney plastic surgeon Darryl Hodgkinson.
"It's also having the right equipment. Crossing the line in one piece... I had a personal taste of the water.
"It can be a dangerous race, but the boat is so solid -- and my crew -- they are so good. I thought it would be a two-year programme before I had a serious chance to win."
Victoire, a 50-foot Cookson/Farr design, arrived in Hobart on Sunday morning, becoming ninth across the line from the original starting fleet of 94 yachts which headed out of Sydney Harbour on Boxing Day.
Her time was two days, 19 hours and 32 seconds. She followed the 100 footers Wild Oats XI, Perpetual Loyal, Ragamuffin 100 and Wild Thing as well as Volvo 70s Black Jack and Giacomo, 80-foot Botin Beau Geste and Carkeek 60 Ichi Ban.
Victoire was named overall winner after the only other yacht which could technically beat her, Wild Rose, was still at sea early Monday after slowing down in frustrating conditions.
Veloce, a 44-foot cruiser which was the 16th yacht to cross the finish line with a time of three days, two hours, 36 minutes and 11 seconds was second in the handicap honours.
While the Rogers 46 Celestial, which had just pipped Veloce home with a time of three days, one hour, eight minutes and 22 seconds, was third.
It is not the first success in the race for Victoire, which under previous owner Chris Bull was named Jazz and finished the Sydney to Hobart second overall in the 2010 race and fourth in 2011 and again in 2012.
This year's Sydney to Hobart, the 69th edition of the race down Australia's east coast, began in uncharacteristically light conditions, with the boats struggling to catch much of a breeze in the initial stages.
But by Saturday night gale force winds set in and the fleet was pounded for the following 24 hours particularly as they crossed the Bass Strait, with one yacht dismasted and a crew member on another vessel breaking his leg.
Officials said conditions had eased overnight and the boats still completing the course were in for better conditions.
"It's a relief for the yachts at sea and also for the race organisers that the weather did abate," the Cruising Yacht Club's Bruce Montgomery told broadcaster ABC.
Some 46 boats have now completed the race, with 38 still making their way to Hobart. Ten yachts retired from the contest

Story by www.globalpost.com via google news

Images courtesy of Rolex. Victoire crew on the podium by Carlo Borlenghi, Wild Oats approach the finish by Daniel Forster.