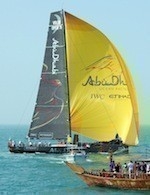 And Emirati 24-year-old Adil Khalid has re-signed as an Abu Dhabi crew member under the leadership of skipper Ian Walker.

Six-time Volvo Ocean Race competitor McDonald, from Brighton in the UK, has completed more than 200,000 nautical miles in the race over a nearly two-decade-long offshore career. Alongside Walker, he will lead Abu Dhabi’s technical programmes, training camps and crew development to streamline the team’s victory pursuit in the 2014-15 race, which starts next October in Alicante, Spain.

“Neal is one of our generation’s best sailors and will bring a fresh, winning dynamic to the team’s preparation. Having played an instrumental part in a hat-trick of leg 1, 2 and 3 victories for Team Telefonica in the previous race, his broad depth and diversity of experience and knowledge will be critical in our next campaign,” Walker, a two-time Volvo Ocean Race and America’s Cup veteran, said.

“As a qualified naval architect he is extremely analytical and capable on the technical side. I have the utmost respect for Neal and he would always be my first choice on any team sheet. I can’t think of a better person to inspire our team for the challenges that lie ahead.

“With the advent of one-design boats, the emphasis will be much more on the sailors and I hope that Neal will help us create the strongest team possible.”

Meanwhile, Khalid — who during the last race in 2011/12 became the first Arab sailor to compete in and complete the global event — joins the team in the UK this week for his competitive racing return, taking part in the Aberdeen Asset Management Cowes Week’s Big Boat Races (August 6 to 8), before crewing the team’s defence of its Rolex Fastnet Race record next week (August 11-13).

Walker, who mentored the Emirati Olympian during the 2011-12 campaign, said Khalid’s experience will serve the team well as it again prepares for a title tilt.

“Adil earned everybody’s respect on board in the last race. He now has all that experience and, with hard work, he should grow into a senior team member. Adil is a very patriotic young man and a great role model for all young sailors in Abu Dhabi, the United Arab Emirates and the entire Arabian Gulf region. I am sure he will get to wave the UAE flag many more times during the next race,” Walker said.

Another Emirati, 27-year-old Butti Al Muhairi, will return to Abu Dhabi’s shore team after a successful stint in the previous race. Al Muhairi, who will also act as Khalid’s reserve, will guide a group of young Emiratis working across the shore-side operations.

Al Muhairi will be led by America’s Cup and Volvo Ocean Race specialist Guy Barron, who joins as Abu Dhabi’s Shore Manager. With more than 25 years’ professional sailing under his belt, Barron will use his vast experience to optimise all shore-side operations throughout the 39,000-mile event.

Abu Dhabi Ocean Racing will announce its full crew line-up in the first quarter of 2014, when it will also receive its new one-design Volvo 65 race yacht. Abu Dhabi itself will host the third 2014-15 Volvo Ocean Race stopover from mid-December 2014 until January 3, 2015.

The Abu Dhabi Etihad Airways In-Port Race, which was won by the home team in the last edition, will take place on January 2, 2015.

Abu Dhabi Tourism and Culture Authority (TCA Abu Dhabi), which is behind the emirate’s race campaign as well as the stopover, is organising events including a fan-friendly Destination Village on the Abu Dhabi Corniche breakwater.