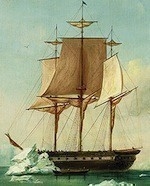 At 3 p.m., August 18, 1838, six ships got under way on the ebb tide and made for the Cape Henry Lighthouse in Norfolk, Virginia. The vessels were packed with books, the latest scientific and navigational equipment, and a crew of 346 men—including a linguist, a mineralogist, two botanists and two artists.

Behind them lay the young, ambitious United States. Ahead lay four arduous years at sea and almost 87,000 miles of ocean.

Thus was the launch of the great United States South Seas Exploring Expedition, 175 years ago this summer, and it was as bold a venture as a mission to Mars would be today. The commander was a brilliant but stern 40-year-old Navy lieutenant named Charles Wilkes, whose orders for the expe­dition were to “extend the empire of commerce and science” by mapping and investigating the vast little-known regions of the southern Atlantic and the Pacific. The last all-sail expedition to circumnavigate the globe, it confirmed the existence of Antarctica and charted 280 Pacific islands and 800 miles of the northwest U.S. coast.

Artifacts from this mostly forgotten journey are being featured in a new exhibition opening this month at the Smithsonian’s National Air and Space Museum (NASM), “Time and Navigation: The Untold Story of Getting From Here to There.”

The expedition’s success depended largely on the 28 marine chronometers Wilkes brought along. They told the accurate time back on land. When compared against the local time on the ship, derived from sky measurements, navigators could determine longitude at sea.

The Wilkes expedition shows “what happens when you have an accurate clock and accurate ways of finding location,” says exhibit curator Carlene Stephens, “and the federal government puts a lot of money into using that knowledge.” The nation, she says, was trying “to solidify its position among the world’s maritime powers by putting that knowledge to work.”

As Wilkes and his men zigzagged across the oceans, filling in borders that had only been loosely sketched, they gathered a mountain of artifacts: mummies, plants, a nose flute, the bodies of over 2,000 birds, a dog sled and a raven-feathered cape. Items in the NASM exhibit include a Samoan shell trumpet, a tattooed cedar mask from the Pacific Northwest and jadelike ornaments from New Zealand.

By the time Wilkes returned, in the summer of 1842, he had gathered a collection of objects and data so huge there was no place big enough to put it. As the years passed, some of it was given away and some was lost. Then, in 1858, what was left found a permanent home in the Smithsonian Institution—established 12 years earlier—where it became part of the foundation collection.

“A tremendous feat of navigation,” Stephens says, “the expedition broadened knowledge of uncharted areas of the world and helped expand American commerce, industry and scientific knowledge. It cemented the nation’s status as a new world economic leader.”

Wilkes died in Washington in 1877, and today rests in Arlington National Cemetery, just across the Potomac River from the fruits of his greatest accomplishment.