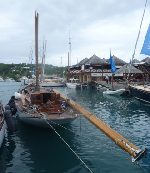 Strong winds, rain squalls and big ocean seas gave the grand old ladies racing at Antigua Classics a beating yesterday, and saw several crews limp home with serious damage to rig or sails. But winds of 25-30 knots, with stronger gusts rolling down off the hills, also gave crews what many said was one of the most memorable and exciting races in years, pounding offshore with torrents of water coursing down the sidedecks.

The worst casualty was The Blue Peter, a 64ft Alfred Mylne design from 1930. A chainplate reportedly pulled out of the deck, bringing down the mast. It splintered at around the mid point, pulling shrouds through the stump of the mast. The mast (above) seems beyond repair and the strain of it giving way also appeared to have caused stress cracks to open up between some of the planks.

Elsewhere, the 51ft Saphaedra broke off the tip of her alloy mizzen mast, while the 60ft ketch Peter von Seestermühe's wooden mizzen mast broke at the spreaders. Owner and skipper Christoph von Reibnitz said that the crew had been moving aft to take down the mizzen staysail when it broke.

Gaff cutter Chloe May was another casualty. Her topmast splintered. There were also a number of reports of sail damage. The costliest was probably the shredded foremain and heasail on Kairos, a giant 124ft schooner.

Fortunately no-one was injured in any of these incidents.

Crews arrived back soaked after some very hard but exciting racing. "It was like the North Atlantic. There was green water coming right over the boat and filling the cockpit," one crewmember told me.

The 83ft Fife schooner Adventuress, on which I raced on Friday, sailed unreefed and carried working topsails. She was going so over waves so steeply that at one point a crew positioned right aft remembers being lifted off the deck "like going over a speed bump."

Today's race should be a more sedate affair, finishing with a parade of sail into neighbouring English Harbour before resuming the nightly partying. For me, it's a romp round the course on Exodus. This is the newest yacht in the fleet, a traditional (and engineless) Carriacou sloop built by islander Elwyn Enoe and just launched at Easter. More on that anon.