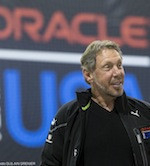 An international jury's decision on Oracle Team USA's illegal-weight violations is expected by the end of the week.

The case could be the biggest scandal in the 162-year history of the America's Cup and could result in the forfeiture of races in the best-of-17 finals against Emirates Team New Zealand beginning Sept. 7.

The Oracle syndicate faces a hearing Thursday with the five-member jury of the International Sailing Federation over the team's admitted violations during the America's Cup World Series.

That hearing will deal specifically with Article 60 of the Cup protocol, which is aimed at protecting the integrity of the Cup.

Two members of the jury spent Monday and Tuesday interviewing 16 Oracle team employees and five employees of America's Cup Race Management in a separate hearing. That one dealt with Oracle people who might have violated Rule 69 of sailing's racing rules, which covers "gross misconduct."

In addition to costing Oracle races, the jury could levy a fine against the sailing organization owned by Oracle Corp. co-founder and CEO Larry Ellison.

On Aug. 8, Oracle admitted that lead weights were improperly placed in its World Series boats. As a result, it forfeited its overall championships in the two seasons the series ran as a warm-up to the America's Cup.

The Cup committee responsible for boat measurements said the weight violations were "an intentional effort" to circumvent the rules. Two rival teams, including Team New Zealand, accused Oracle of cheating.

It's possible that Oracle could even be thrown out of the regatta altogether, giving the Kiwis the Cup without even sailing a race. That possibility is considered extremely unlikely.

Oracle team chief executive Russell Coutts has said the weights were placed by a team employee or employees without the knowledge of management. He said the weights had no bearing on the performance of the boats.

Photo of Larry Ellison provided by the America's Cup.