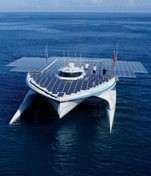 MS Tûranor PlanetSolar, the world’s largest solar powered yacht at 31m long, marked the end of her 22 day deep-water scientific expedition along the Gulf Stream, by arriving in style on a sunny day on London.

There to present the objectives and successes of the University of Geneva’s fact finding mission to understand processes taking place at the interface between atmosphere and ocean and how these provide the keys to climate evolution, her arrival also presented an opportunity for SuperyachtNews.com to find out her plans for a luxury superyacht conversion, the original dual-purpose vision of her renewable energies entrepreneur owner, Immo Ströher, when she was launched in 2010.

Cordula Ströher, more active in the work of PlanetSolar after the retirement last year of her father, explained that those plans had been reversed.

“The idea to use the yacht as private luxury vessel was one of the ideas, but we’ve changed our strategy,” she said.

“We decided to find an afterlife for this yacht in [the sorts of scientific missions the University of Geneva undertakes]. What was most important for my father was to build a yacht that would not just end up in a museum – his strong wish for the yacht was to [give her] an afterlife. So to have found the possibility to use it as scientific platform is the best - it fits with our family’s ethos.”

There were also practical factors behind the decision not to convert her into a luxury yacht, demonstrating the limitations of building with solar energy as the sole source. Although the yacht itself can generate 200W of power per metre squared of solar panel, meaning on a typical sunny day she can attract 550kW of energy to allow up to 72 hours without the need for sunlight, her energy as a superyacht would far exceed this.

“Air conditioning needs a lot of energy. In our plans we [did factor in her future as luxury yacht in but]…we did not properly appreciate this at the start,” said Ströher. The air conditioning system on a superyacht would use as much energy as PlanetSolar needs just to move in a day, she explained. The yacht also goes at a modest pace of 5 knots as average, and 10 knots as top speed.

The lack of a large sundeck was also a problem. “We have a big deck but you can’t put chairs on it,” she said.

There may however, be some limited role for Planet Solar to play in the charter sector, perhaps finding a place within the alternative charter models proposed that put unique experiences ahead of luxury. Ströher said the yacht could feasibly be hired for days or a week in between her scientific expeditions, giving guests a slice of the action and excitement of being on board such a unique vessel.

More pertinent to the superyacht industry perhaps is the powerful, visual statement made by the majestic Tûranor. Watching her glide in amongst the corporate skysrapers of the city of London, her 536.65m² solar panels glinting no less brightly than the paeans to industry and progress she passed, she presents an unmistakable parallel between the two sectors of transport and science.

This month, Eclipse owner Roman Abramovich invested millions in two renewable energy companies for trucks and jets, whilst green technology companies are swelling the ranks of new companies floating on stock markets. So, although solar powered yachts might not be lining the docks at Monaco by 2020, she is a sign of things to come as the two worlds of yachting and green technology collide.

Emphasising this, and how transport is keeping apace with changes in the greater world of investment and advancement, was MP and ex minister of shipping, Jim Fitzpatrick, who was also present at the open day.

“The history of shipping is that it is the dirtiest form of transportation – uses the dirtiest fuels, therefore…I wish [Tûranor and her team] every success.”

Although the yacht will not have a role in the superyacht fleet, and perhaps only a very limited future as a charter vessel, she does offer a valuable snapshot of how renewable energy can be successfully incorporated into shipbuilding.