Paris Off to Attempt to Circumnavigate the World Again 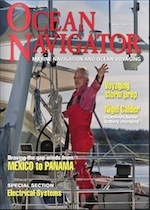 Paris, sailing his 63ft custom-designed yacht Kiwi Spirit, had hoped to become the oldest and fastest person to sail solo around the world from Bermuda, by breaking the record set in 1986 by the late Dodge Morgan, who did it in 150 days, aged 54.

However, 76-year-old Dr Paris was forced to pull out of his attempt to break that record in January when first he suffered injuries on his boat and then, five days later, equipment on his racing yacht began to fail in the South Atlantic Ocean. He limped into Cape Town about eight days later.

There were major concerns about the integrity of the rigging system on the yacht, and ultimately Dr Paris' safety, as he prepared to enter the Southern Ocean with both sailor and boat compromised. At that time, conscious of the large body of people - friends and family - that had made sacrifices to enable his voyage, he was adamant there would be no second attempt. It appears now that he has been urged to change his mind and have another go.

It's significant to point out that one of the most celebrated cruising sailors in the world today, Jeanne Socrates, at 70 the oldest woman to circumnavigate the world solo, unassisted and non-stop, was successful only on her third attempt, in her solid Swedish boat Nereida, a Najad 38.

Dr Paris has recently been in extensive meetings with sail makers, designers, builders and others during the past month to determine the best course of action that would restore his confidence in the boat and its fittings.

'There is no point in starting again if I cannot have a boat in which I have complete confidence, and which has been adapted in every way possible for a solo sailor of my age and abilities,' he told the Otago Times.

Dr Paris said Kiwi Spirit had not only been 'made whole again', but made stronger, and he was more confident about setting forth again. 'Should I fail a second time, and the odds are of course high for many reasons, in addition to breakages, know that there will not be a third try as there is a limit to my wife Catherine's tolerance for such things.'

If Dr Paris succeeds second time around, he will tick a number of boxes.

He will be the first to sail from his departure point of St Augustine, solo, non-stop and non-assisted around the world. His departure point for his attempt to break the record of 150 days around the world will be Bermuda. As his boat is environmentally friendly, which brings its own power challenges, he will be the first to complete such a challenge without putting carbon into the atmosphere. He will also be the oldest to complete a non-stop unassisted journey solo.