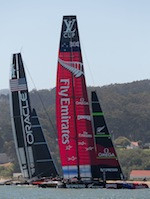 The penalty is the most severe in America's Cup history and means that when defending champion Oracle Team USA faces powerful challenger Emirates Team New Zealand in the best-of-17 series beginning Saturday, Oracle must win 11 races to retain the trophy, and the Kiwis need to win only nine. Effectively, the team starts the regatta two races in the hole. Oracle Team USA will also be fined $250,000.

The scandal is a disgrace to the defending America's Cup champion and host of the prestigious, world-renowned regatta that has already been plagued by problems, including allegations of spying and favoritism and a fatal capsize last spring. The cheating dates back to the America's Cup World Series warmup event in 2012, when a handful of Oracle members hid bags of lead pellets in the forward posts of their smaller 45-foot catamarans, not the 72-foot catamarans that are being raced during this summer's America's Cup regatta that started with the Louis Vuitton Cup challenger series in July.

But the jury of international sailing experts said in its ruling that "the seriousness of the breaches cannot be understated" and found that several members of the team were guilty of "gross breach of a rule and of good sportsmanship" when they added the extra weight to increase the performance of the boats.

The 45-foot catamarans, called AC45s, were built as a "one-design" class of boats that were, by definition, supposed to be identical so the talents of the crew, not engineering, would determine the winners. Numerous international teams joined in the fleet races at events around the world, including two in San Francisco last summer when team skippers Jimmy Spithill and Coutts sprayed champagne to celebrate their victories. The jury determined that the infractions involved only a small group of people, including wing trimmer Dirk de Ridder, and neither Coutts nor Spithill were aware of the infractions before they surfaced last month.

The ruling included a quote from Nick Nicholson, chairman of the measurement committee, who was asked how he felt when he learned of the extra weight put into the boats to make them faster.

"I felt old, used and stupid ... our trust in the team had been betrayed," Nicholson was quoted as saying. "If we can't deal in an atmosphere of a certain amount of trust, we simply cannot do our job."

Still, Coutts said the punishment does not fit the crime. The last significant penalty to an America's Cup syndicate occurred in 2002, Coutts said, when Seattle-based OneWorld was penalized one point in the Louis Vuitton Cup semifinals for illegally obtaining design information from the New Zealand team.

"We've got penalized two points in the match for something that a few of our sailors did on an AC45 more than a year ago without the knowledge or approval of management or the skippers," Coutts said. "I think it's an outrageous decision."

Oracle Team USA voluntarily forfeited all its wins in the America's Cup World Series when the revelations surfaced and hoped that would be penalty enough. The jury found that de Ridder instructed Bryce Ruthenberg, a rigger from Australia, and boat builder Andrew Walker to add the lead weight. All three men were expelled from the regatta. Sailor Matt Mitchell, a grinder from New Zealand, has been suspended for four races. All apologized for their behavior.

Tom Webster, a former sailing protocol officer for several Olympics who has occasionally advised Oracle Team USA on protocol issues, said he was shocked by the ruling.

"In any sport, this is unprecedented. In the NFL, NBA, NHL, never has a ruling body taken away points before a game was played. I mean never," Webster said. "In the history of sport, I cannot think of a single instance where a governing body has put themselves in a position to predetermine the outcome, or influence the outcome, of an event that has yet to be held."

Coutts said the banishment of de Ridder, who is considered Spithill's right-hand man, is devastating. Jack Griffin, editor of cupexperience.com and an America's Cup expert, said the loss of de Ridder breaks up a key part of the sailing team that helped win the cup for Ellison in 2010. De Ridder was like the gas pedal to Spithill's steering wheel, Griffin said.