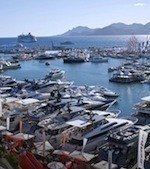 Sylvie Ernoult will be responsible for the operational management of the 2013 Cannes International Boat Show.

Ernoult’s responsibilities include the operational management of the 2013 Cannes Boat Show, along with development of a medium and long-term strategy for the festival. She will report to Alain Pichavant, director of the Sport and Leisure Division at Reed Expositions.

“Sylvie has a very good knowledge of trade relations in the luxury sector, as well as internationally,” says Jean-Daniel Compain, general manager of the Culture, Luxury and Leisure Division at Reed Exhibitions.

“She has experience in establishing effective business development strategies and her appointment as show manager demonstrates our commitment to strengthening our leadership in the competitive world of boat shows and to developing the show’s reputation on an international level.”

Ernoult has many years’ experience in the maritime and tourism sectors, including roles at Stardust (which was later acquired by Sunsail), French cruise company Festival Croisieres France, and luxury hotel group Taittinger.

She joined the Club Med group in 2010, where she served as head of real estate at ‘Club Med Villas and Chalets’.