Posted: 1st May 2013 | Written By: Jamal Hammadi – The Huffington Post 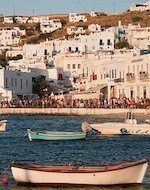 Turkey was a magical trip.Cruising through the Aegean Sea which lies between Turkey and Greece. The Mediterranean Sea  lies to the south, with the Greek Peninsula to the west, and part of Thrace to the east. The tides in the Aegean Sea are mellow. Winters can be rainy, but summers are dry which is typical of a Mediterranean climate.

Our trip began in Greece on the island of Mykonos, it was a lovely place to spend the night and start our boating trip on Cloud 9. In Greece you feel immersed in a mythological landscape. In Greek mythology Mykonos was where Zeus battled the Titans. The island's name is in honor of Mykonos, a descendant of Apollo and Rio. The town welcomes you with Mykonos windmills from the 16th century and a large church, that in fact is five separate churches. The buildings are predominantly white with the bluest sea encircling them.

As we traveled on Cloud 9 through the Anatolia Sea and part of the Mediterranean Sea we could not help but marvel at the water around us. The water is breathtakingly blue, a reflection of the sky, and it is cleaner than I ever dreamed possible. You feel immersed in the environment around visiting places via a yacht. The soothing motion of the sea with the backdrop of the sky is really something to experience first hand. It places you directly in the moment, and the journey is just as important as the destination. There is a stillness that allows your mind to be open to the scents and surrounding beauty. The ocean is a vast expression of a spirituality that calms my mind while exercising my physical boundaries and leaves me in awe.

The most memorable moments were spent kayaking in the morning, taking a swim around the boat or stopping off on small beautiful islands as we made our way down to Bodrum. I loved the textures and colors of the Turkish sensibilities and the incredible history of the islands. On Patmos Island there is a monastery perched on top of the mountain. We were told is were the bible was written from John the Apostle. Patmos is mentioned in the book of Revelation, and you can visit the cave where John is said to have experienced his Revelation. Unfortunately it was closed on Mondays which is when we cruised over to that island. Even from the outside you get a sense of awe and history.

Another highlight of the trip was dining at Maca Kizi in Bodrum. The food is incredibly fresh and local and combines Turkish and Mediterranean flavors and styles. There are a variety of olive oils grown in the region that influence the cooking. Bodrum is well known for housing the Tomb of Mausolus, one of the Seven Wonders of the Ancient World for its aesthetic achievement. Besides such an amazing history, Bodrum offers a chance to unwind. The air and the sea soothe away stress. The stunning sunsets and delicious aromas combined with the vibrant colors and patterns of the region truly are an escape.

I recommend the Turkish islands this summer.