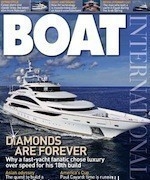 The media tycoon who owns the weekly political magazine the New Statesman is poised to snap up the bible of the super yacht world in a deal worth tens of millions of pounds.

I understand that Mike Danson, who made a near-£200m fortune from the sale of his company Datamonitor six years ago, is in detailed talks about a takeover of Boat International Media, a specialist publishing and events group.

Boat International, which has been owned by August Equity, a buyout firm, since a £29m deal in 2006, could change hands within works, according to people close to the negotiations.

Mr Danson plans to acquire Boat International through Progressive Media Group, a private investment vehicle he set up after his Datamonitor bonanza.

Progressive owns the New Statesman as well as the journalists' trade title, Press Gazette, and a string of business-to-business data operations.

On Wednesday, the company announced that it had appointed Andy Hunt, the former chief executive of the British Olympic Association, as its new managing partner.

Mr Danson also sits at the top of a separate, public company called Progressive Digital Media, which is listed on London's junior AIM market, and which owns businesses such as Kable, a provider of information about technology expenditure.

It is not clear how much Mr Danson plans to pay for Boat International, but insiders said it would be well in excess of the sum forked out by August in 2007.

Boat International publishes more than 1.4m magazines each year that sell in over 57 countries worldwide. It also organises eight annual events in London, Monaco, Fort Lauderdale, Venice, Porto Cervo and New York, and owns the world's most comprehensive database of super yachts, as well as a social and business networking tool for super yacht captains and crew.

Mr Danson is one of Britain's most successful media entrepreneurs, having founded Datamonitor in his London flat with a £5,000 investment in 1989. The company was sold to Informa for £502m.