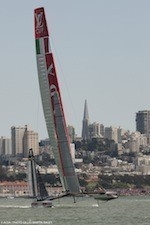 SAN FRANCISCO -- Sweden's Artemis Racing ended its emotional journey to the America's Cup on Saturday, losing its last race after a valiant comeback to prove the team could compete after the heartbreaking loss of its beloved crew mate, the skipper's best friend.

As the team crossed the finish line more than two minutes behind Italy's Luna Rossa, the crew waved to the thousands of spectators cheering a heartfelt tribute from shore. Then, with Andrew "Bart" Simpson's name emblazoned on their sails and on their sleeves, the sailors embraced.

"I'm hugely proud of our team. It's been a terrible period," said Artemis skipper Iain Percy, who grew up sailing with Simpson, won two Olympic medals with him and served as best man at Simpson's wedding. "He would have been so proud of us, considering this is something that none of us thought we'd be able to do two months ago when we lost him."

As team owner Torbjorn Tornqvist told reporters later Saturday, "We said to ourselves our victory was to participate and be on the start line in the semifinals. We did that and we didn't do more than that this time. But we'll be back."

The elimination of Artemis Racing from the best-of-seven Louis Vuitton Cup semifinals Saturday came in four consecutive races against the Italians, who will advance to the best-of-13 finals against powerhouse Emirates Team New Zealand beginning at 1:10 p.m. Saturday. The winner will face defending champion Oracle Team USA in the 34th America's Cup beginning Sept. 7.

Artemis started Saturday's race aggressively and was penalized when it bumped into Luna Rossa in a maneuver to gain a dominant position just seconds before crossing the starting line. Artemis stayed ahead at the first mark, but Luna Rossa quickly overtook Artemis on the downwind leg, showing off its improved jibing tactics while riding high on hydrofoils, and widened its lead throughout the race.

The Italian team will have to perform at the top of its game to have a chance against the Kiwis, who beat Luna Rossa resoundingly in every race during the round-robin portion of the challenger series last month.

Because the team began its campaign late compared to the other teams, Bertelli said, it had little time to prepare.

"In these nine months, we became more competitive, but the time that is left is not in our advantage," Bertelli said. "So we hope that the improvement we did to the design will make us competitive in our second round of races against Team New Zealand."

Artemis was considered a strong contender until tragedy struck May 9. During a routine training exercise in moderate winds on the bay, the team's 72-foot catamaran capsized, sending the crew flying and pinning Simpson under the floating wreckage. Percy held his best friend's body as rescue crews tried to revive him.

Boat designers and builders spent the past two months, morning until night seven days a week, rebuilding their second boat to be stronger and safer. The sailors only had eight days practicing on the new boat before they entered the regatta in the semifinals.

"They were noble, honorable, brave," Pamela Chie from Marin said of the Artemis team after watching the race from America's Cup Park. "It was pretty special to see them pull it together."

Taking the stage onshore at the end of the race, Percy thanked the fans for their support.

"You've taken us into your hearts for the last couple of months," he said, "and have really pulled us through some of the worst moments of all our lives."