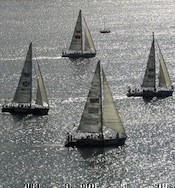 London is to host the start and finish of the 2013-14 Clipper round the world yacht race.

The race will start on 1 September 2013 and cover 40,000 miles, visiting 14 ports on six continents in the world's longest ocean race, before returning in July 2014.

The competition was founded in 1996 by Robin Knox-Johnston, who in 1968 became the first person to sail solo nonstop around the world.

It aims to offer amateurs from all walks of life the chance to experience the thrill of ocean racing and a circumnavigation of the planet. Up to 650 international crews will be taking part in the race.

The event will see the debut of the third generation Clipper 70 ocean racing yacht. The 12-strong matched fleet will be hosted in a race village at St Katharine Docks, central London's only marina and the official Clipper race start and finish port.

The boats will begin and end their journey on the Thames in front of Tower Bridge.

Knox-Johnston said: "What better place to host the start and finish than London, in front of one of the best known landmarks in the world. This will be the first time the capital has hosted a global yacht race start and finish."

London mayor Boris Johnson predicted this "feat of human endeavour" would be a draw to sailing fans and a huge boost to London's economy.

He said: "Those who take part are an inspiration to us all and exhibit the very best of the human spirit. As they battle through everything the elements can throw at them, I wish everyone on board these stunning vessels the very best of luck."

More than 3,000 people have participated in the Clipper race in the event's history.