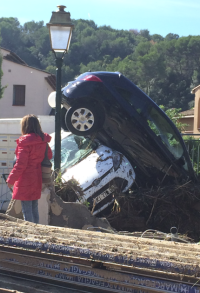 Most of the fatalities were caused by fast rising waters trapping people in cars inside parking buildings and tunnels. Three elderly people died when their retirement home in Antibes was flooded. One of the worst hit areas was Biot where the river Brague burst its banks, flooding and destroying homes, including the home of OnboardOnline's news editor. President Francois Hollande has declared a state of "natural disaster" in the region where a large clean up mission is now underway.