Yachting News » Of Interest » EFG Sailing Arabia – The Tour
« BACK 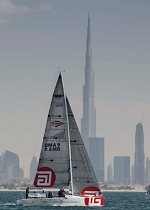 The seven-leg tour started on February 9 in Bahrain, with the six Farr 30 teams making stops in Bahrain, Qatar, the UAE and Oman.

The teams consist of some of the world’s best sailors, student teams from Europe and some of top sailing talent from Oman. The tour covered 760 nautical miles with a mix of in-port, offshore and coastal racing.

This world class regatta aims to encourage one of the region’s fastest growing sports and to reignite the rich maritime heritage of the Gulf.

This thrilling long distance offshore sailing race is the only one of its kind in the region. Team EFG Bank Monaco came convincingly first. Skipper Sidney Gavignet is one of a small band of international sailors who can boast success in the Volvo Ocean Race, the Olympics and the America’s Cup. His strong team includes two of Oman’s best sailors Ali Al Balushi and Muhammed Al Mukaini plus seasoned international campaigners.

A student team from Plymouth University, Team Messe Frankfurt have put in an excellent performance. Skipper Marcel Herrara has only just turned 21, yet has come in a convincing second place. The team is all amateur sailors who have grand ambitions for their future sailing careers. Dutch students, Team Delft Challenge, who are all under 25 years old have come third. They are skippered by one of Holland’s leading young sailors Kay Heemskerk.

The team is all students and all close friends. It was neck and neck until the very last leg for them. On the final morning just 0.25 points were between them and the all female team aboard Al-Thuraya Bank Muscat. After a gripping last leg sailing into Muscat the team were delighted to come first for the leg, which secured them a place on the podium in third place. It was fourth place for American sailor Katie Pettibone, veteran of 3 America’s Cup teams and 2 around the world races. She has been sailing with 4 local Omani women aboard Omani entry Al-Thuraya Bank Muscat. Renaissance, skippered by former naval officer Mohsin Al Busaidi, consists of an entirely Omani crew for the first time. They finished in 5th place with the Royal Navy of Oman finishing in 6th place.