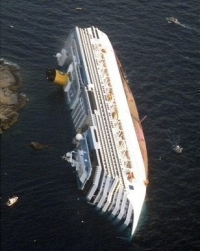 Two officers, the helmsman, the head of cabin service and the head of the crisis team were given up to two years and 10 months in jail for multiple manslaughter, negligence and shipwreck.

They had agreed plea bargains and may avoid custodial sentences.

Capt Francesco Schettino is being tried separately.  He is charged with multiple manslaughter for causing the shipwreck and abandoning the vessel with thousands still aboard. His case will resume on 23 September, and his request for a plea bargain has been rejected by the prosecution.

They received prison sentences ranging from 18 months to two years and 10 months as the court agreed to plea bargains in order to avoid a lengthy trial.

The heaviest sentence was given to Roberto Ferranini who was ashore as the disaster unfolded and in charge of co-ordinating the cruise ship company's response to the crisis. None is likely to go to jail as sentences of under two years are suspended in Italy, while longer sentences may be appealed or replaced with community service, Reuters cited judicial sources as saying.

Prosecutor Francesco Verusio told reporters that Capt Schettino's trial was the most important.

"Justice is beginning to be done but there will be real justice in the end, when we can determine with certainty what the responsibilities of the captain are," he said.

But lawyers for the victims reacted with dismay.

"What will the families of the victims think? This is truly disappointing," Daniele Bocciolini told SkyTG24. "Schettino remains the only one on trial, but not the only one at fault, in my opinion."

Massimiliano Gabrielli, lawyer for the group Justice for Concordia, compared the "shameful" length of the sentences to the seven years given to Emilio Fede, who was convicted of procuring prostitutes for former Prime Minister Silvio Berlusconi.

Capt Schettino's lawyers say he faces a maximum 20 years in jail if found guilty. He denies the charges and says that without his actions many more people would have died. The trial is taking place in Grosseto, the city nearest the site of the wreck, and much of the case against him has already been disclosed in a report by court-appointed experts.

He has been accused of leaving the luxury liner before all those on board - 4,229 - had been evacuated and steering it too fast and too close to shore during a night-time, sail-past salute to people on the tiny island off Tuscany.

Capt Schettino has already accepted some degree of responsibility, asking for forgiveness in a television interview last year as he talked of those who died.

However, Capt Schettino maintains he managed to steer the stricken vessel closer to shore so it did not sink in deep water where hundreds might have drowned.

His lawyers say he is being made a scapegoat for what was simply an accident.

The vessel was holed by rocks just as many passengers were dining on the first night of their cruise. A disorganised evacuation followed as many of those on board panicked when the ship began to tilt to one side.

Most passengers have already accepted compensation of about 11,000 euros ($14,200: £9,400) each, but remaining groups of survivors are holding out for more.